Then shall the king say unto them on his right hand, I was in prison, and ye came unto me. Then shall the righteous answer him, saying, Lord, when saw we thee in prison, and came unto thee? And the king shall answer and say unto them, inasmuch as ye have done it to one of the least of these my brethren, ye have done it unto to me. (from Matthew 25:34–40)

In this account of judgment day, among those who Jesus calls “least” are those in prison.

Among those who receive The Outlook are over a half dozen prison inmates. The Reformed Fellowship Board wrote to these inmates for a more personal contact with them. A reply has been received from most of them, and each has his own story to tell. They have a hunger for the Word of God, and some of them are leading Bible studies among their fellow inmates.

Not because our good works would merit us eternal life, but out of love and obedience we are to visit and minister to those in prison. “My little children, let us not love in word, neither in tongue; but in deed and in truth” (1 John 3:8). “Let brotherly love continue. Be not forgetful to entertain strangers: for thereby some have entertained angels unawares. Remember them that are in bonds, as bound with them; and them which suffer adversity, as being yourselves also in the body” (Heb. 13:1–3a). Prison statistics in the United States are staggering. With more than two million prisoners, the United States has the largest prison population in the world. 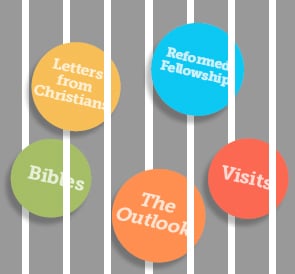 An inmate in North Carolina who responded to a letter from the Reformed Fellowship board president stated, “I was and still am amazed that someone at your level or position would even take time to write an inmate.” He indicated that he likes to write, but no one writes to inmates any more. He further reported being disillusioned about churches and ministries because his numerous letters requesting help for study materials all have been ignored. In his second letter, he wrote, “I received your letter yesterday at mail call. I have to say I was really surprised. So I pray you will forgive me for allowing my doubts from the past history of other so-called Christians place judgment on you. Your two letters now have sparked interest in my spirit.” Frequent letter exchanges have continued with this inmate.

This inmate grew up in a divorced family with four different stepmothers. He ran away from home at age thirteen, and went back and forth until age eighteen. He stated that he always was a part of a church in one way or another, but he used God when he needed Him and put Him in a corner when he didn’t need Him. He states, after his incarceration in 2007, he turned himself around to focus his heart and mind on God. He likes to read and study, and to teach the Word of God to fellow inmates. He had been a baker by trade. He has been incarcerated in different prison facilities and says that he has never heard anyone from a Reformed church come into any of those facilities. Reformed books have been sent to him.

An inmate in Texas who receives The Outlook was transferred to a different prison because his successful prison ministry was not welcome at the prison where he had been. He is the group leader of Brothers Praying for Others, a group of more than fifty Reformed Christian inmates who worship together on Sundays and meet each day for Bible study. An elderly saint from Covenant Reformed Church (URC) in Kansas City, Missouri, had been corresponding with him for more than twenty years through her involvement with Chuck Colson’s Prison Fellowship. As she became more aged, her nephew (also a member of Covenant Reformed and a long-time Crossroads Bible Institute instructor) joined her in ministering to this brother in prison. Through their efforts this inmate completely embraced the Reformed faith and enthusiastically teaches it to other inmates. Through special arrangements, this brother was accepted into membership of Covenant Reformed Church.

In a letter to Reformed Fellowship, this inmate tells about both his parents “living to drink” and spending all their money on alcohol. They moved frequently, and he lived where there was no gas, heat, electricity, water or food. He stole cookies and chips to satisfy his hunger. He overheard his mother tell his father that he was a mistake and should have died. Kids at school made fun of him and his torn clothes and worn-out shoes. He ran away from home at age twelve and learned to survive on the streets.

He writes ,“The Outlook is a wonderful and blessed magazine to learn more about the Reformed faith, made possible by a group of Christian believers who adhere to the biblical Reformed faith that has helped me to see and believe what is true concerning God’s Word.” Through his work as instructor of Crossroads Bible Institute, the aforementioned member of Covenant Reformed Church became acquainted with another inmate in a Texas prison. This inmate showed a lot of promise and this brother saw to it that the inmate received The Outlook and other Reformed materials. He has since been released and is engaged in an inner-city ministry.

Another inmate in Michigan who receives The Outlook was sentenced to life for murder in 2001. He maintains his innocence, and the Michigan Innocence Clinic is presently working with him in an effort to prove that. Unlike the other inmates receiving The Outlook, this man was a professing Reformed Christian prior to incarceration. This past year was his eleventh consecutive year he has read through and studied the entire Bible while incarcerated, according to a prescribed study guide schedule. He is one of twenty inmates who do on-call suicide watch for inmates who threaten to hurt or kill themselves. He says that he has been the target of young gang members and that it is a huge challenge to live the Christian life in prison.

In early 2013, Reformed Fellowship received a letter from an inmate who was also a student at Divine Hope Reformed Bible Seminary at the Danville, Illinois, Correctional Center. A board member replied to him which resulted in continued mutual correspondence.

An inmate in a Florida Faith and Character Based Residential Program prison also receives The Outlook. This prison initiative offers inmates a variety of activities and classes, both religious and secular, focused on personal growth and character development. He went to prison as a Roman Catholic and thought he was saved. Through the efforts of a volunteer chaplain who taught the Westminster Confession of Faith, his life was drastically changed, and he now professes to be Reformed. He read the book Meeting Jesus at the Feast by Dr. John Sittema, published by Reformed Fellowship. He wrote to Dr. Sittema, who introduced him to The Outlook. This inmate writes, “Your magazine has been an encouragement to me and a source of comfort.”

A Reformed pastor who serves as prison chaplain in Massachusetts has been in contact with Reformed Fellowship. Some Bible study materials have been provided for his ministry to the inmates there, and they are embracing the Reformed doctrines. Those inmates share in reading The Outlook and profit from it as well.

The member of Covenant Reformed Church of Kansas City cited above, in an article by Glenda Mathes Christian Renewal, January 16, 2013, pp. 6, 7), said that Charles Colson believed that the next great awakening would come from the prisons. He asks if that would be the case, what should Reformed churches do about it? The board of Reformed Fellowship gives thanks that The Outlook can be used for the upbuilding of the saints and the advancement of the Reformed faith to those behind bars.

Mr. Myron Rau is the chairman of the board of Reformed Fellowship. He is a member of the Covenant United Reformed Church in Kalamazoo, MI.