Surely one of the greatest needs of OUf time is the recovery of true, Biblical, effective preaching. Almost everywhere I hear remedies, but few strike me as addressing the real need. Some suggestions are imbalanced. These engender the destruction of a properly settled assurance in many of God’s elect. Others are weak and foster a kind of preaching that settles for giving out information as long as it is deduced from the text of the Scripture. What we need is a new reformation in the pulpit, a new understanding of what it is God expects the preacher to accomplish by his important calling, and what it is the congregation should be earnestly seeking God for, week by week.

It is still “through the foolishness of the message preached” that God chooses to “save those who believe” (1 Cor. 1:21). The pastor who properly pays dose attention to his doctrine and his life saves both himself and those who hear him (I Tim. 4:16). For this purpose the “man of God” (a synonym for the minister in the New Testament) must also “preach the word” and “be ready in season and out of season. He must furthermore, study both the Word and his people (2 Tim. 4:2).

But what is preaching? By strict lexical definition, Greek word translated “preaching” means “to announce good news.” This is the word from which we get our word evangelize. The other Greek word means simply “to proclaim, to announce publicly.” Scholars have debated the difference between these words and even suggested that one, or both, have the lost as their primary focus. Modern believers often think of preaching as that which is done from behind a pulpit at set time and on a particular day.

I was recently asked by the publicist at Moody Press, “What is your favorite book?” That was not easy to answer. First, with nearly ten thousand books how do you pick one? Second, I have dozens of favorites. But she wanted me to pick one so I said, “If I am forced to choose, it would be Preaching and Preachers, by D. Martyn Lloyd-Jones.”

In this classic, ML-J says, “The most urgent need in the Christian Church today is true preaching….” Lloyd-Jones later writes, “What is it that always heralds the dawn of a Reformation or of a Revival? It is preaching. Not only a new interest in preaching but a new kind of preaching….when the Reformation and Revival come they have always led to great and notable periods of the greatest preaching that the Church has ever known.” 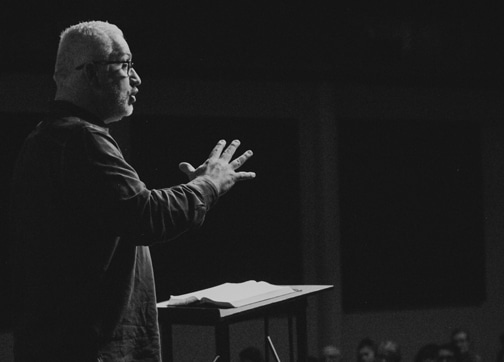 Lloyd-Jones goes on to show that true preaching is declaration. A certain amount of information must be given as well. But this note of declaration is central. Says Lloyd-Jones, “Any true definition of preaching must say that (the preacher) is there to deliver the message of God, a message from God to those people.” He is, in Pauline language, “an ambassador.” Furthermore, “Preaching should make such a difference to a man who is listening that he is never the same again. Preaching, in other words, is a transaction between the preacher and the listener. It does something for the soul of man, for the whole of the person, the entire man; it deals with him in a vital and radical manner.”

PREACHING MUST SPEAK TO THE CONSCIENCE

Until the conscience of the hearer is addressed by the Word of God preaching has not taken place. Here is a fundamental difference between preaching and other forms of speech and instruction. This is what is often missed by modem courses in homiletics.

On September 20, 1843, Rev. Bradley Minor, speaking to the Boston Baptist Association, explained this matter very succinctly and clearly when be said:

The man who addresses himself to the intellect and most of whose efforts are to enlighten men is a teacher. He who appeals to the passions is an orator. But the man who by manifestation of the truth commends himself to the conscience is a preacher. The religious teacher may be heard with profit and with profound respect. The pulpit orator with admiration and delight. But the preacher alone speaks with authority, and the hearers do not stop at respect and admiration—they go on to conviction and exclaim, “What shall we do?”

Solomon Stoddard, father-in-law of Jonathan Edwards, captured this same point well, when he wrote, “We are not sent into the pulpit to show our wit or eloquence, but to set the consciences of men on fire.”

Tell me, you who preach—when they have heard your message, what are they anxious about? What are they urged to do, based upon true reflection and careful consideration of what you have earnestly declared? Do you put your finger upon the consciences of your hearers? Or are you afraid of their response?

If anything characterizes modem preaching it is what Jay Adams has called “its insipid obsequious approach to speaking the truth.” To use the modern phrase, we will not “tell it like it is.” We are reserved, overly sophisticated, and horrified by the kind of frankness that true preaching demands.

Now we must not be rude, or crude. There is no place for such. But even as I think of this warning I am reminded of a friend of mine who is just about the best preacher I have ever heard. He is often accused of being “too frank.” Yet I almost never fail to profit profoundly from his preaching Often, if I do feel “put off,” it is precisely because he has hit a nerve in my own conscience. And he doesn’t do it by manipulating me, but by powerfully lodging his message in my mind with a force that is compelling.

In the Book of Acts we see explicit, clear preaching. The word used to describe it is one every reader of the New Testament has noted-boldness! The word is parresia which means, freedom to speak openly, a willingness to be frank, or plain speech not characterized by fear.

Preaching must affect the whole person, not simply the mind through information. Or the emotions by stirring a person. Or the will by causing people to make decisions. It must feed the mind by God’s Word, stir the emotions by incarnating the truth preached, and move the will by the power of the Holy Spirit (not by direct assault) working through the questions raised by the text of the Word of God itself.

AIM AT THE HUMAN HEART FROM GOD’S HEART

Many today seem to think that preaching aimed at the heart is something that simply stirs up the emotions, as opposed to the mind. This is a non-Biblical and false distinction. We also speak of “heart knowledge” versus “head knowledge.” Again this is a distinction with no Biblical warrant. What we may very well mean by this is that we must do more than think about something with our minds We must know it, feel it and decide upon it. This is correct.

Biblically, the heart is the inner person (d. Provo 4:23; 1 Sam. 16:7). Preaching that truly aims at the heart seeks to understand God’s heart which is revealed in Scripture, and then to speak from His heart to the inner person of the hearer. The power of such preaching is not in the style, the tone, the loudness of voice, or the pedagogy used. It is plainly in the preacher’s having been gripped in his being by God’s heart and then appealing to the heart (i.e., the inner person) of the hearer on the basis of God’s revelation alone.

“Faith comes by hearing, and hearing comes by the Word of God” (or. as one version helpfully puts it, “by the preaching of Christ”). When Peter preached at Pentecost he had a revelation from God. We do as well. Ours comes from the written Scripture. The Bible is God’s revelation. To expect another is a lack of faith and confidence in what He has powerfully given. To believe there must be more is to undermine the sufficiency of Scripture (d. Ps. 119). To preach to the heart, preachers must study and know the heart of God. They must saturate themselves with His thoughts, His plans, His promises. Only then can they be moved by God’s Word and give it to others in such a way that they will cry, “What must I do?” If all we do is rearrange the mental furniture of hearers we will never see God work through our preaching.

How sad then. when preachers give people their ideas, their opinions, their politics, their social commentary. Preachers are called upon to “feed the flock” by the good and pure milk of the Word. In the day of judgment preachers will not be judged for teaching people how to exegete the constitution and laws of the land. They will be judged if they fail to warn the flock with the “whole counsel of God.” The test will be, not how large their congregation was, but how faithfully they built. i.e., “with what sort of materials they built the church” (1 Cor. 3:13)

BRETHREN, PRAY FOR ME

Can you see why Paul often asked people to pray for his preaching? To the Colossians he requests prayer that he might “proclaim it (the message of Christ) dearly, as I ought to” (4:4). To the Ephesians he speaks of spiritual warfare and concludes that the important thing is the offensive weapon God has put in the hands of the church. What is the weapon? It is the Word preached, says Paul (Eph. 6:18–20).

So what must the congregation do? Paul asks the people of God to “pray on my behalf that utterance may be given to me in the opening of my mouth (preaching) to make known with boldness the mystery of the Gospel” (6:19). He says it twice, lest we miss the central point, when he adds, “I am an ambassador in chains (therefore pray for me) in proclaiming it (that) I might speak boldly, as I ought to speak” (6:20).

Clarity is essential. Power is a must. The preacher is called upon to speak as an ambassador of Christ—with anointed boldness straight to the conscience of his hearers. Pray that you who preach, do this with ever increasing draughts of power, and that you who listen experience the same as you sit under bold and heart-searching Gospel preaching.

We need a reformation in our pulpits and a revival in our congregations. May God grant these mercies more and more to us all.