THE Gereformeerd Weekblad, popular Christian weekly published in The Netherlands, in its issues of June 12 and 19, last, contained a pair of articles written by Professor N.J. Hommes as a comment on Torch and Trumpet. We are proud of this fact, since Prof. Hommes is well-equipped to give a noteworthy evaluation of things from the Reformed point-of-view. 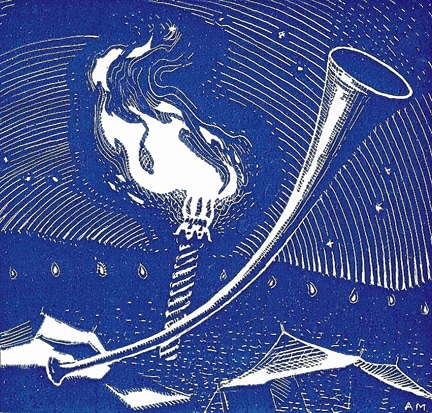 Though Prof. Hommes does not quite understand that the Calvinistic Culture Association and Torch and Trumpet are not to be identified as one and the same organizationally, nevertheless he draws the correct conclusion that both are specifically interested in the making of a defense for and a witness to the historic Reformed faith. Reformed Fellowship, Inc., owners and publishers of Torch and Trumpet, and the C.C.A. are indeed one in general purpose, and it is quite understandable therefore that the C.C.A. should employ this magazine to publicize its purpose and program.

Hommes sees as one of the most obvious characteristics of Torch and Trumpet its close allegiance to those great fundamental principles set forth by Abraham Kuyper. Dr. Kuyper’s ideas are quoted and developed with the greatest care and concern, especially by the framers of the platform of C.C.A. Hommes notes with appreciation that C.C.A. seeks to develop and to apply Kuyper’s conception of Antithesis with respect to the very practical areas of religion and education, marriage and the family, paedagogy, science, politics, art and recreation. This renewed emphasis on the Antithesis concept is seen to stand in sharpest contrast to the desire for cooperation and compromise with the world and its organizations, so obvious both in The Netherlands and in our own country.

Of particular interest to Prof. Hommes are the declaration of principles set forth by the C.C.A. in the April–May, 1953 issue of Torch and Trumpet. These principles are recognized by him to stand as a resounding protest against the tendencies to worldliness which are ever present among us, and which seem often to have firm hold on the attitudes and practices of even many Reformed people. The Common Grace idea receives due recognition in these declarations, but not at the expense of the fundamental enmity spoken of in Genesis 3 between the seed of the woman and the seed of the serpent. This Antithesis is given a deliberate and laudable prominence. It is consciously recognized by C.C.A. as something which began in Paradise and which will continue until the end of the world. Meanwhile the developing-kingdom of darkness which will manifest itself most clearly in the Antichrist, the “man of sin,” must be opposed at every point by a militant Christianity.

It is the opinion of Prof. Hommes that the C.C.A. declarations give clear evidence of the fact that this new organization is one which seeks to approach the cultural problems of today’s world in terms of the biblically established principle of the Antithesis, which means that it views these problems in full recognition of the dividedness of the world and the race. In this respect Hommes feels that the organ in which they have been given opportunity to publish their declarations is well·named. The task of the Christian as discovered in the light of special revelation demands elucidation and declaration. The Christian’s testimony and witness ought to give forth a clear and unmistakable sound.

The positive declarations of the C.C.A. constitute a clear, trumpet-like call as they plead for Christian action not only in the sphere of Christian education, but also in the spheres of politics and society, Hommes asserts. The writer notes that this emphasis upon Christian organization in the social and political spheres has been under consistent attack in The Netherlands not only by tho s e outside, but, surprisingly enough, by those inside the Christian camp as well. Because of this sad fact Christian organizations in The Netherlands have been burdened with the necessity of defending and vindicating their very existence not only over against attacks from without, but also fro’n within.

Hommes’ opinion is that this deliberate opposition to Christian organization in the social and political spheres will prove to be increasingly incongruous as time goes by, for “the passing of time will slow that, strictly considered, those who oppose these Christian organizations are actually engaged in sawing off the very limb on which they themselves stand.”

The compelling reason for Christian organizations in all spheres of life is to be seen to arise from the reality of the Antithesis. The entire discussion which has arisen relative to the question of a possible cooperation with the world and its organizations is in reality reducible to this: Is organizational separation required to insure the integrity of the Christian witness? Prof. Hommes expresses, gratitude as he observes that the C.C.A. is quite aware of the basic question involved in this ver significant consideration.

He writes, “It is heartening to note thai the recently organized C.C.A. is able to see the reality of the Antithesis with such clarity. This, to be sure, is not the personal discovery of an Abraham Kuyper, but in this sin-stricken world it is the simple demand which follows from the evident reality of in and grace. We find ourselves as Christians in the midst of a struggle on the battlefield of this sinful world. Upon such a battlefield it is necessary to utilize every facility for first-aid. To neglect to do so would be sheer folly since such neglect could well cost us our lives. Christian organizations are an indispensable part of the armor which the Christian must use on the battlefield of modern culture.”

This conception and application of the principle of the Antithesis may very well require the Christian to separate himself from the sinful world at those points where, temporarily, at least, it is impossible to develop successfully a positive Christian program. Pro£. Hommes, for one, does not seem to be alarmed at this possibility, which is also the stand of the C.C.A. He rather considers the necessity for separation at one particular point or another to be quite understandable. “Where Christians are seriously concerned for the demands of the Antithesis,” writes Hommes, “there the necessity of separation will be considered as an inescapable accompaniment.”

The basic necessity for separation from the world is a fact which is illustrated repeatedly in God’s infallible Word. The entire history of Old Testament Israel is a testimony to the divine requirement of separation. “And Israel dwelleth in safety, the fountain of Jacob alone…” (Deut. 33:38). “Be ye not unequally yoked with unbelievers: for what fellowship have righteousness and iniquity? or what communion hath light with darkness? And what concord hath Christ with Belial? or what portion hath a believer with an unbeliever? And what agreement hath a temple of God with idols? For we are a temple of the living God; even as God said. I will dwell in them, and walk in them; and I will be their God, and they shall be my people. Wherefore come ye out from among them, and be ye separate, saith the Lord, and touch no unclean thing; and I will receive you, and will be to you a Father, and ye shall be to me sons and daughters, saith the Lord Almighty” (II Cor. 6:14–18), So we see that in both Old and New Testaments spiritual Israel is called upon to be a separate people.

When Old Testament Israel conducted itself in faith as the Israel chosen or God, whose calling it was to witness to the covenant mercy of Jehovah in the midst or a sinful world, then it experienced the blessing of God upon their every endeavor. Whenever Israel neglected it calling and entered upon entangling! alliances politically, socially, culturally with the nations of the world, it experienced God’s wrath and displeasure. Separation from the world organizationally was for Old Testament Israel the necessary prerequisite for a consistent witness. If we, as the New Testament Israel or God, are to witness effectively to the grace of God it will also be necessary for us to engage more vigorously in separate Christian organizational activity!

May God ever give us the spiritual courage and strength to be true to the demands of God’s Word, to avoid falling into worldly patterns of culture and society. May the light of divine revelation move us to honor the demand for a clear and unmistakable sound of the trumpet of Christian witness. That, it might be said, is the message which Prof. Hommes’ comments means to bring’ to us on this American continent, possessors with him of a common Reformed faith.