The minutes of the Graafschap congregation give a very simple picture of the founding of the Christian Reformed Church.

The records begin September 10, 1849. Nothing is said concerning the organization of the congregation. It consisted of about fifty families who had settled in the area two miles west and two and one half miles south of Van Raalte’s church. Most of the people were from Germany. They spoke Dutch and were part of the Dutch Church. Many had recently been persecuted for joining in with the Secession. Although a little late in organizing as a group of immigrants, when they landed in the area of Holland in the fall of 1847 they considered themselves an integral part of the Van Raalte Colony. In April of ‘48 the congregation of “Allegan County” was considered by the Classis Holland as so dose to Van Raalte’s church that they are advised to attend the Holland church rather than to hold separate services.

It was at the above-mentioned Classis that elders from Allegan County (Graafschap) showed their interest in the basis of fellowship within the Classis. The fifth question which these brethren submitted to the Classis was most significant. They ask concerning “the Catechism, Formulas of Concord and the Canons of Dordt what views are held about these things.” In answer they were assured by all of the “complete harmony therewith” and of “the acceptance of the entire Kerkelijke Handboekje with all the Church Orders therein contained and declare that the church government expressed therein has our perfect assent, and comprehends the government of the Reformed Churches” (Classis Holland Minutes7 p. 23). These were cautious elders and undoubtedly they knew why they asked the questions. Anyone acquainted with the differences that had arisen among the Seceders in the Netherlands from 1840 to 1846 could understand their concern. But now they were satisfied. They had come to an understanding reflecting the essentially homogeneous nature of the whole colony.

But there was anything but unity within the struggling congregation. Does the internal difficulty give a clue to later events? Many students have thought so. And indeed Graafschap surely had its troubles. They were not, however, to be confused with subsequent events.

Before the congregation had a minister it had the making of its problem in the form of a man who married his brother’s widow. In April of ‘48 the elders asked Classis about the matter. The assembly “judged that such marriages cannot be permitted in the Church of God, inasmuch as it is incest, according to Leviticus 18:17 and 20:21.” This advice was followed by the Consistory. Shortly after, those who disagreed formed the congregation at South Holland. This move so weakened Graafschap that Classis suggested it join the South Holland Church. However, when the South Holland minister was deposed, a group sought to call an elder and have him ordained. Classis refused and the group joined the Associate Reformed Church which accepted the elder as a minister. This was known as the Schots Church. Both South Holland and the Schots Church shortly disintegrated and Graafschap became a stable and flourishing congregation. 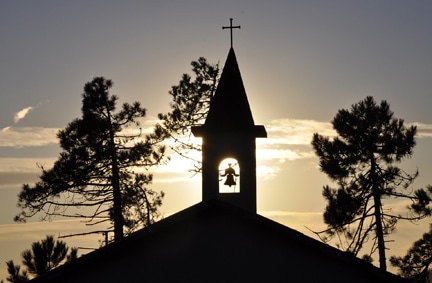 When the historic vacancy of 1855–1864 began, the Colony was disturbed by voices of protest to the Union with the Dutch Reformed Church. For the pastorless congregation this was not a local issue. Of some other matters mention is made about long or even heated debate in the consistory. Nothing however of the kind is said about the issue of union. In fact there seems to have been little trouble in Graafschap about these matters. Nor is there evidence of trouble between Graafschap and Van Raalte or the other brethren in the Colony.

The first minutes showing concern about the union with the Dutch Reformed Church are dated March 16, 1856.

“The meeting was opened with prayer by Rev. Vanden Bosch [the counselor]. Art. 1. The Consistory, being aware of the conditions in the congregation regarding the union with the church in the East, the objections which one daily hears and experiences, gives opportunity to the brethren to speak by turns.

Art. 2. A letter is read from the Rev. John Berdan who has separated from the church with which we are united which gives proof that we are not with the true church.

Art. 3. Some come with objections which cannot be substantiated and they are admonished by Rev. Vanden Bosch to be careful. Others are more evident.

Art. 4. After having heard and weighed all this, Rev. Vanden Bosch says that we must have more light and then we must protest and if this is vain, he thinks that he will repudiate fellowship with the church in the East and remain with the stand of the Afgescheiden Kerk according to the Synod of Amsterdam, 1840.”

The delegates at the next classis protested especially the use of hymns by the Reformed Church. Van Raalte assured them that the Reformed churches in all countries and at all times have had hymns, and thus with a wave of the hand would change a psalm singing church into a hymn singing one. Whether rightly or wrongly, Graafschap had considered itself as bound by mutual Church Order to sing the psalms. To say the least, here was a matter which no one had bothered to arrange.

But hymns were something of a symptom of other things. It was decided Dec. 25, 1856, to call only such a minister as would be true to the Church Order and Doctrine of 1618 and 1619, that is, of Dordt.

The Congregational meeting Feb. 4, 1857 was led by Rev. Vanden Bosch.

“Art. 1. From various members objections to the union with the Dutch Reformed Church, since that church according to letters from the East is filled with departures from the truth of the Perseverance of the Saints; the doctrine of Predestination is ignored or misrepresented; there are Free Masons, the 800 hymns, the preaching of the H. P. Scholte, and the failure to exercise discipline.”

“Art. 2. After this it was decided to protest at once.” The congregational meeting of March 16, 1857 finds the vice president, S. Lukas, in charge. Rev. Vanden Bosch is not present.

“Art. 1. The Dutch Reformed Church is discussed and a report is given of what Rev. Wyckoff said—that if that church did not please us we had the complete right to bid it a brotherly farewell and return to our former stand.

Art. 2. Thereupon it was decided to declare to the next Classis that we hold fast to the doctrines and practices of the Gereformeerde Kerk and separate ourselves from all who alter or falsify them. Signed H. Strabbing.”

Finally we have the declaration which was drawn up April 7 and sent to the Classis April 8:

We are obliged to give you notice of our present ecclesiastical standpoint, namely, separating ourselves from your denomination, together with all Protestant denominations, with which we thoughtlessly became connected upon our arrival in America. We are uniting ourselves with the Afgescheidene Gerefonneerde Kerk (The Seceded Reformed Church) in the Netherlands, and exhort you herewith affectionately to walk in the same way with us. The reasons for this our secession, namely, 113 members, or communicants, are as follows:

2. Inviting [men of] all religious views to the Lord’s Supper, excepting Roman Catholics.

3. Neglecting to preach the Catechism regularly, [to hold] catechetical classes, and [to do] house visitation.

That no religious books are circulated without the consent of other denominations, directing your attention to the Sabbath booklet, with the practice by J. Van Der Meulen, 1855.

And what grieves our hearts most in all of this is that there are members among you who regard our secession in the Netherlands as not strictly necessary, or [think that] it was untimely.

In the report of Rev. Wyckoff he gives us liberty to walk in this ecclesiastical path.

Brethren, we are glad that almost the entire congregation, the number of members given above, with us, the consistory, and our dear little children, again stand upon the same standpoint on which our fathers enjoyed so great blessedness, and oh, we should rejoice still more if the King of the Church should bring you to this conviction. This is the duty of us all. The God of love be your counselor and guide to walk in the way of truth.

Your affectionate brethren in Christ, In the name of the Consistory, (Signed ) J. F. Van Annrooij, Pres. Henry Strabbing, Clerk.”

This document was received by the classis, together with three others. Rev. Klyn expressed the hope that his withdrawal should cause no bitterness. Graafschap hoped that all the brethren in the colony would unite in the withdrawal. The issue in this vacant church was not personal. Could the Seceders from the Church in the Netherlands find a truly homogeneous place in the Dutch Reformed Church !)f the East? The answer depended largely on what the Colonists themselves considered the requirements of sound Reformed Doctrine and practice and what they considered to the the condition of the Eastern section of the Dutch Reformed Church. The wisdom of this step depended primarily upon the accuracy of the portrayal of conditions in the East, and the relevancy or even legitimacy of the ideal. The Graafschap Church had taken its stand in good conscience. For above all this was for these men of conviction a matter of sound principle.

Even while the pulpit was vacant, the congregation flourished. Dozens of confessions of faith were made. Many people came from Holland itself and later formed a congregation in the city. The present building was constructed. Finally, under the leadership of Rev. D. Vander Werp, first editor of the Wachter, Graafschap became a great instrument of blessing in the Christian Reformed Church.