According to TIME, March 31, 1952, we have a poker-playing President. During Harry Truman’s March vacation at Key West the President and his political household spent each day from four o’clock in the afternoon till eleven at night in a friendly game of poker, with time off for dinner. Each player put up a hundred dollars each week so that he could keep his losses down somewhat and it was called “depression poker” since one could negotiate a dole if his money ran out temporarily. For the common man, this certainly was not a penny-ante game, but for a man who is reputed to have amassed $200,000 during the past six years the stakes may have been a mere bagatelle. However, to the Christian citizen of America these poker games and the “easy come-easy go” attitude toward money are symptomatic. They are indications of moral laxity and a certain calloused indifference to the fact that the Lord is slaying the sons of the nation and calling us to repentance by his judgments. 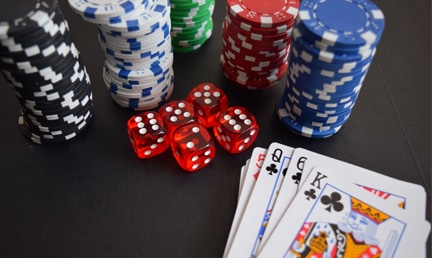 It is not my purpose now, in this article, to expose the national sin of gambling—which, incidentally, is also found in church circles to an alarming degree—in which the present incumbent of the White House is setting the youth of the nation a very evil example. But the gambling craze to which the President and his friends succumb whenever an opportune moment presents itself—this mad fever for financial and material gain without work—is simply symptomatic of the wanton luxury and worldly revelry of the heads of the nation in Washington, D.C.

The entire situation in the nation’s capitol forcefully reminds one of the political and spiritual leaders in the days of Amos, the sheep-herder, who was called to announce the impending judgment of God against Israel. Amos inveighs against the “kine of Bashan . . . that oppress the poor, that crush the needy, that say to their lords, Bring, and let us drink.”

The stern prophet pronounces a woe upon those that are at ease in Jerusalem and that trust in the mountain of Samaria. These are the notable men of the chief nation. “They put far away the evil day, and cause the seat of violence to draw near…they stretch themselves upon their couches and eat the lambs out of the flock, and the calves out of the midst of the stall and sing idle songs to the sound of the viol…they drink wine (whiskey) out of bowls, and anoint themselves with the chief oils; but they are not grieved for the affliction of Joseph” (Cf. Amos 6:1–6). This, to my mind, is a perfect picture of the notable men of our nation, from the Chief Executive down through the flunkies that wait upon their lords with craven servility in expectation of favors dispensed. But there is no regard for the dead and wounded in Korea and their sorrowing parents at home—the so-called police action is dragging on interminably and the suspicion that it is to be determined by mere political consideration is gradually taking shape in the minds of the people.

In this article I want to call the attention of our readers to the wanton disregard for truth and justice that characterizes the ruling dynasty in our so-called democracy. There can be no doubt that the old proverb “Like people like priest,” can here be applied with a vengeance and quoted in defense of the administration. An administration presumably cannot rise higher than the people from which it is taken. However, the opposite proverb also applies:

“Like priest like people”—the people will follow and emulate their leaders. The shameless frauds and grafts that are the order of the day in Washington will no doubt be duplicated a thousand-fold throughout the land, unless by the grace of God the people are stirred in their consciences and raise a mighty protest against this shameless lawlessness.

Allow me to present a few fragments of fact concerning the current corruption in high places -more particularly the godlessness of our present administration and its total disregard for integrity and the claims of justice. This presentation of facts is really superflous since the daily papers for the last year have been filled with long tales of what is actually going on. However, since most of us become insensitive after a little while to even the most shocking records of moral scandal, since we soon are so calloused to flagrant lawlessness that we not longer stop to consider the heinous nature of such terrible sin, a few examples may not be amiss. It will serve to point up the fact that we as a nation have been courting the curse of the great God, who rules in righteousness; who will visit the sins of those that hate him upon the third and fourth generation.

Most of the facts presented have been garnered from an article by the Messrs. Knebel and Wilson published in LOOK, Magazine of May 22, 1951. The article is entitled:

These scandalous years in Washington. It presents a picture of “political scandals, breeding on friendship, favoritism and frauds.” But in spite of all the evidence to the contrary, our Chief Executive has the shameless effrontery to say, “My people are honorable–all of them.”

But here is a little bit of the official record, which not only impugns the President’s friends but shouts to high heaven against the calloused consciences of the American people. The President had hardly been sworn into office to uphold the constitution or he began issuing pardons to some of his “honorable people” down Missouri way—the fellow workers in the

Pendergast machine. These honorable men (63 in all) had been convicted in a vote fraud in 1936 elections in JACKSON County, Missouri. No announcement was made from the White House about this shameful “execution of justice.” Soon after that two Capone mobsters were transferred from Atlanta penitentiary to Fort Leavenworth at the request of Paul Dillon, who had influence with the party. James Gavin, serving five years for dodging income taxes, had his sentence commuted. His brother paid $1,000 into the Democratic treasury. The case of Edwin W. Pauly is also notorious. He was the treasurer of the Democratic National committee, a rich oilman from Colorado. He suggested to HamId Ickes, then Secretary of the Interior, that he block Federal plans to pre-exempt oil rights. From this Mr. Ickes turned away with contempt. Whatever one may say about Mr. Ickes and his affiliations, he certainly was above this type of corruption. But to finish the case of E.W. Pauly, in January 1946 President Truman nominated-him as under-secretary of the navy. In that capacity he would have been able to administer the Navy oil reserves. This was a piece of bare-faced corruption, of political skulduggery without precedent. He was not confirmed by the Senate.

However, one of the most calloused and shameless acts of official corruption was that of the President in setting at liberty Mayor James M. Curley of Boston and Donald Wakefield Smith of the National Reserve Board, who both were serving a sentence in the Federal Penitentiary for mail fraud in a $60,000 case of signing war contracts to clients. But the corrupt Curley is an honorable man in political circles. This course of corruption runs through “cotton futures,” “lard exports,” “race-track priorities,” “1948 election contributions,” “deportation stays for underworld characters,” “phoney stock companies, in business with Federal Internal Revenue collectors,” “underworld campaign boosters and contributors in Miami and Kansas City,” “Post Office official stamp issues for private revenue,” “Kentucky ballot box stuffing by a protege of Associate Justice Frankfurter and Chief Justice Vinson,” “public support of known communist agents by Secretary of State Acheson and Justice Frankfurter,” etc. etc.

This record of official Washington’s “honorable men” reads like a fairy tale for the nurture of the devil’s henchmen, a kind of Ali Baba and the Forty Thieves in reverse. Surely, where the carcass is, there will the vultures be gathered together. As one final example, to illustrate the amoral society in which we live, and to highlight the shameless effrontery of official Washington, let me mention the loan of $1,300,000 from the federal treasury to finance a gambling joint in Nevada. There is nothing illegal or wrong with it, according to the men who handle the public’s funds, since gambling is legal in Nevada. Neither the law of God nor the common conscience of the people means anything to these “honorable members” of the official household in Washington.

Let no one shrug his shoulders and say, “Well, the President is not going to run anyway, so things will be better next year.” There is no doubt in my mind that there will be a great improvement if a man like Kefauver of Tennessee, Russell of Georgia, Taft of Ohio or Eisenhouwer were elected. But essentially, the problem will not be solved by a change in administration. As long as the motto of the two-party system “to the victor belong the spoils,” is openly and shamelessly accepted as the standard of operations there will be conniving of one party with the other, since the opposition party itself hopes to profit in its turn. As long as the American people believe that gambling and graft are basically all right and want to be able to make such easy money or to bribe an officer of the law with a “ten-spot” there is not going to be any change in Washington.

It is right here that we Calvinists have a great opportunity. This is a challenge to the power of our world-and-life view. Calvin changed Geneva into a veritable kingdom of God on earth according to the testimony of John Knox. Could not the loyal sons of Calvin at least make an imprint upon their times?