Key Verse: “Peace to you all who are in Christ Jesus. Amen.”

A person’s last words are often memorable. It pays to ponder them in terms of the life or, in this case, the letter leading up to them. As we shall see, these closing words of 1 Peter resonate with the themes of the entire epistle.

Peter had written this brief letter with the help of Silvanus (his Roman name) or Silas. Here is what we know about him: Silas was a respected leader in the Jerusalem church, introduced to us by Luke in connection with the Jerusalem gathering recorded in Acts 15. Silas was among those who brought the Jerusalem decision to the various churches of Asia Minor, explaining both the context and the details in a trustworthy way. Silas also accompanied Paul on the latter’s second missionary journey through Asia Minor, suffering hardships in Philippi, Thessalonica and Berea. With Timothy Silas carried on the work in that region after Paul went on to Macedonia. These three missionaries met again in Corinth (Acts 18:5), where Paul and Silas labored for a year and a half. It is not known how Silas met Peter and came to be at his side in Babylon during the writing of this epistle.

Silvanus enjoyed Peter’s confidence, so that he could serve as both courier and interpreter of this letter as it was read in the churches.

With two words the apostle characterizes his letter-writing method: exhorting (NIV: encouraging) and testifying. And here is his purpose: “that this is the true grace of God in which you stand.”

Throughout this letter the apostle had been emphasizing that God’s grace is a daily reality for pilgrims en route to glory. Divine grace provides salvation in Christ here and now. Grace breeds courage to suffer for doing good and builds perseverance. In short, God’s grace serves as a firm foundation on which to stand. Taking this stand on the foundation of grace enables Peter’s readers to resist the devil, to honor their rulers and masters, and to respect one another in marriage. (Question 1)

The most difficult question of interpretation in these verses concerns the identity of “she who is in Babylon.” Some suggest this refers to Peter’s wife, but in view of his general formulation, this is unlikely. Most interpreters take this to be a reference to the church in the place from which Peter is writing. He conveys greetings from the church who is “co-elect with you,” which brings us back to the beginning of the epistle where Peter had addressed his readers as “elect pilgrims.” Moreover, there is no reason to view the name “Babylon” as a cryptic reference to Rome, but we may understand it to designate that region whose center was the ancient city of Babylon, just outside the Roman empire, where a large number of Jews had settled (Calvin).

In any case, the readers of 1 Peter could be heartened by the greetings from another congregation sharing in suffering—and in divine strength through co-election! Once again we learn that the teaching of divine election is no rocking-chair doctrine, but a great motivation to keep on walking the pilgrim’s path.

Peter also brings the greetings of his spiritual son Mark, about whose relationship to the apostle we learn more from church tradition than from Scripture. It seems that Mark traveled frequently with Peter and labored with him in teaching the gospel. He worked alongside Paul and Barnabas (Acts 13:2–5; 15:39), as well as on his own (Col. 4:10; Philem. 24). Believers throughout Asia Minor who would hear Peter’s letter read would have been encouraged to receive the greeting of this devoted servant of the gospel.

The readers not only receive greetings, but were also to give greetings to each other with the kiss of love. The kiss was an ancient Eastern greeting custom demonstrating a close family bond. This kiss of love (Paul writes of greeting with a holy kiss) would have been a warm expression of congregational fellowship for those persecuted by a cold pagan society! (Question 2)

The benediction of peace (read 5:14b)

Whereas the apostle Paul often closed his letters with reference to the grace of Christ Jesus, Peter pronounces a blessing of peace upon suffering pilgrims. This was the peace with which he began his letter, a spiritual wholeness and integrity multiplied to those “elect according to the foreknowledge of God the Father, in sanctification of the Spirit, for obedience and sprinkling of the blood of Jesus Christ” (1 Pet. 1:2–3). Spiritual peace is a product of reconciliation with God and of a clear conscience. Peace with God and with one’s self provides needed protection when we face our persecutors. (Question 3)

Peter’s pronouncement is not for private enjoyment, but addressed “to you all who are in Christ Jesus.” Pilgrim believers live together, and they live in Christ, permanently joined to Him in a relationship that determines their lifestyle and sets a stamp on their character. This relationship creates and seals the fellowship expressed in the kiss of love, for the sure protection and preservation of the flock unto eternal glory. With this certainty Peter ends: Amen! So be it! 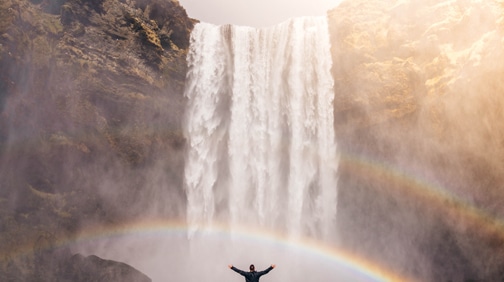 After he had dedicated his commentary on 1 Peter to Edward VI, king of England, John Calvin summarized its contents with characteristic lucidity:

Peter’s purpose in this Epistle is to exhort the faithful to a denial and contempt of the world, so that they may be free from carnal affections and all earthly hindrances, and aspire with their whole soul after the celestial kingdom of Christ, and so that being lifted up by hope, supported by patience, and fortified by courage and perseverance, they may overcome all kinds of temptations, and pursue this course and practice throughout life.

Our theme for these studies has been: Pilgrims among pagans. With Calvin we have heard our heavenly Father urge us forward along the road to glory. Through the forgiven and restored apostle Peter we have seen our exalted Savior show us how to suffer.

Now we are called to bear the Spirit’s glorious fruit—love, joy, peace, longsuffering. kindness, goodness, faithfulness, gentleness, self-control. Through suffering persecution the fruit of a God-pleasing character will ripen for the day of harvest.

On that day, after the Judge has tenderly plucked and polished our good works, He will award His ribbon of approval and receive us into His eternal fellowship.

May this Triune God be glorified in our suffering, through Jesus Christ, to whom belong glory and the dominion forever! (Question 4)

1. Read John 21:15–19. Give several references from the epistle of 1 Peter to illustrate that Peter was fulfilling Jesus’ commission to him recorded in John 21.

2. What would be an appropriate application of 1 Peter 5:14a today?

4. Write a few sentences summarizing the benefits of suffering persecution.