Key Verse: “Therefore, since Christ suffered for us in the flesh, arm yourselves also with the same mind, for he who has suffered in the flesh has ceased from sin, that he no longer should live the rest of his time in the flesh for the lusts of men, but for the will of God.” 1 Peter 4:1–2

Suffering as proof of allegiance (read 4:1–2)

When he begins this new section with “therefore” Peter picks up the thought of Christ’s suffering mentioned in 3:18. There is a close connection between Christ’s suffering and the suffering of Christians. Our affliction lies on the same road travelled by Christ, the road of the cross. As our Pioneer He has gone ahead of us, so that all we need to do is follow in His steps (see 1 Pet. 2:21).

When Christ suffered in His body the unjust and cruel abuse of men, He was no helpless victim. He was armed with insight, with an intimate knowledge of what was happening to Him as God’s Son and Substitute. Keeping His eye on the goal of obtaining full redemption for God’s people equipped Jesus to endure to the end.

Similarly, Christians facing struggles of faith and holiness can ann themselves with clear insight into the origin and outcome of persecution. They know full well that when believers choose to turn their back on their former way of life, old friends and associates will retaliate with mockery and abuse.

Peter expresses all of this in terms of a general rule: “He who has suffered in the flesh has ceased from sin” (4:1). Suffering for the faith at the bands of others is sure proof that one has finally finished with the former sinful lifestyle. (Question 1)

We might organize Peter’s explanation in the following verses this way: the believer’s definitive break with the life of sin has a goal (v. 2), a reason (v. 3) and a result (v. 4). The aim of this radical break is that the Christian no longer allows himself to be led by human desires, but by God’s will. The reason is that he has wasted enough time living the pagan life. And the result is that someone who no longer tolerates sin soon finds himself surrounded by people who won’t tolerate him!

The choice represented by spiritual conversion is expressed in verse 2 as living either for evil human desires or for God’s will. Conversion means that, like a train switched to another set of tracks, the new life in Christ runs further and further away from the old set of tracks, driven by God’s will rather than by human desires, destined for God’s glory instead of human pleasure. (Questions 2 & 3)

Suffering as product of alienation (read 4:3–4)

Living according to God’s will inevitably produces a confrontation with one’s surrounding culture and lifestyle.

The sins characteristic of the old way of life feature the abuse of alcohol and social lewdness. Such sins become so common that many in society no longer view them as sins. Television programs and comedians help to portray drunkenness and public immorality as funny or “normal.” Those who refuse to participate any longer are viewed as disrupting social harmony. Their definitive break with sin leads God’s children to become alienated from their neighbors, co-workers and friends. In Peter’s words, “they [pagans] think it strange that you do not run with them in the same flood of dissipation, speaking evil of you” (v. 4). Deviant behavior gets redefined; it used to be defined as conduct violating God’s law, but under the influence of paganism, deviance is anything that violates social standards accepted by the majority in society. Peter alerts us to the fact that just as pagans blaspheme God, so too they blaspheme (speak evil of) God’s children. (Question 4) 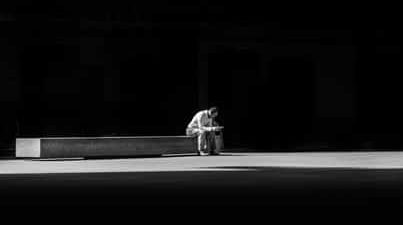 Suffering as prelude to accountability (read 4:5–6)

Such blasphemers will have to answer to the heavenly Judge who stands ready to judge the living and the dead. This fact provides suffering pilgrims a perspective for evaluating the abuse they endure. Leave it in the hands of the Judge of heaven and earth! In the future, roles will be reversed: those who judged believers during history will themselves be judged at the end of history.

This judgment will serve both to punish the adversaries of God and His children, and to vindicate those children who were persecuted on earth. This seems to be the best understanding of verse 6: “For this reason the gospel was preached also to those who are dead, that they might be judged according to men in the flesh, but live according to God in the spirit.” The phrase “those who are dead” most likely refers to believers who at the time of Peter’s writing had passed away, who had been among the earliest Christians. They had heard the gospel preached; their faithful holiness was judged (condemned) by public opinion if not by martyrdom itself.

To encourage his contemporaries in their suffering pilgrimage, Peter points to these deceased pioneers, contrasting their “being judged according to men” with their “living according to God—in the Spirit.” Two opposite standards for measuring, the one perishable and finite, the other imperishable and infinite, yield two opposite outcomes. From a purely human vantage point, Christians are judged to be losers; they’ll never score a ten. But from God’s point of view, these believers who are written off by their pagan neighbors have in reality received through God’s Spirit imperishable life.

Ask yourself: What will motivate you to suffer abuse in our increasingly pagan society for the sake of the Savior? Do you need any greater incentive than the suffering of Jesus Christ?

Well then, consider these three:

(1) Suffering for the sake of truth and righteousness verifies that you are finished with the old life of sin.

(2) Suffering as Christ suffered fits the style of pilgrims walking in the steps of their Pioneer.

(3) Like nothing else, suffering abuse for Christ will force you to draw on the resources of new life through His Spirit—resources that like the widow’s oil, will never be depleted, ever. (Question 5)

3. According to Heidelberg Catechism, Lord’s Day 33, what is conversion? Is it a once-in-a-lifetime event, or a continuing process? What event in the Christian life happens only once?

4. Give examples of how people speak evil of God’s children nowadays in history books, in Hollywood and in politics.

5. Mention several resources available from the Holy Spirit to help us endure suffering for Christ’s sake.