Key Verses: “But sanctify the Lord God in your hearts, and always be ready to give a defense to everyone who asks you a reason for the hope that is in you, with meekness and fear; having a good conscience, that when they defame you as evildoers, those who revile your good conduct in Christ may be ashamed.” I Peter 3:15–16

In our previous lesson we heard Peter use Psalm 34 in urging us to continue doing good. In our present passage, that appeal becomes a beatitude.

Normally, people don’t harass those who follow the good; so believers need not fear reprisals for living uprightly. Still, holiness and right living evoke criticism among pagans who often realize their own sinful guilt, but continue rebelling against God.

If believers should suffer for doing what is right, then they. are congratulated with a beatitude: “Blessed are you!” Peter echoes the Lord Jesus, who also pronounced a blessing upon those who suffer for the sake of right living (Mt. 5:10). Righteousness characterizes the lifestyle of Christian pilgrims who live in a world characterized by unrighteousness. The conflict that results from these two styles is always fundamentally an ethical conflict.

In these circumstances Christian pilgrims need not fear the threats of their opponents. Peter quotes from the prophet Isaiah: “Do not say, ‘A conspiracy,’ concerning all that this people call a conspiracy, nor be afraid of their threats, nor be troubled. The LORD of hosts, Him you shall hallow; let Him be your fear, and let Him be your dread” (Isa. 8:12–13). This negative formulation is followed by a positive command: “But sanctify the Lord God in your hearts…” Notice the sharp contrast between fearing the enemy and hallowing the Lord. What comes immediately to mind is the first petition of the Lord’s Prayer, “Hallowed be Thy name.” Respect for God drives out fear of the enemy.

Don’t overlook the phrase “in your hearts,” whereby Peter emphasizes the center of human personality as the starting point for the new life.

Whatever lives in the heart crosses the lips, as verses 15b–16 show. The Christian pilgrim must be continually ready to give a reply to anyone who inquires about his lifestyle. Observe carefully that his answer responds to a question evoked by his peculiarly Christian conduct. Evangelism essentially aims at evoking such questions and answering them. (Question 1)

For such responses to convince the questioner, they must be given “with meekness and fear” meekness toward the inquirer and fear toward God.

The testimony of a good conscience is required both for the credibility of our talk and for the durability of our walk (v. 16). In spite of our answers, unbelievers still attack the character and conduct of believers as being evil, basically because they despise the Christ who is the Source and Power behind our good conduct. Holding firmly to our new life-direction in Christ by following in His steps will shame our critics already now and in the last day.

With verse 17 Peter provides a summary transition between 3:13–16 and 3:18–22. Friend and foe alike agree that it is better to suffer injustice than to do injustice. Notice the condition: “if it is the will of God.” Peter’s readers live in a variety of circumstances. But if indeed it should happen that any of them suffer for doing right, that suffering is placed within the context of God’s will. Knowing this serves to motivate believers in such circumstances to do what He wants.

Brought near by Christ’s suffering (read 3:18)

Once again Peter places the believer’s suffering in the context of Christ’s suffering (see 2:20–21). But here Christ’s suffering serves not as an example, but rather as confirmation that much good can arise from following God’s will. Christ suffered as the Just One, thereby removing the sins of those for whom He died. Pilate and his wife acknowledged Jesus as righteous, and Peter, Stephen, Paul and John bore witness to Him as the Righteous One. He suffered on account of sins; that is: His suffering was brought about by the sins of His enemies, and was intended to remove the sins of His own. By His suffering Christ became the Guide who goes ahead to lead us to God. 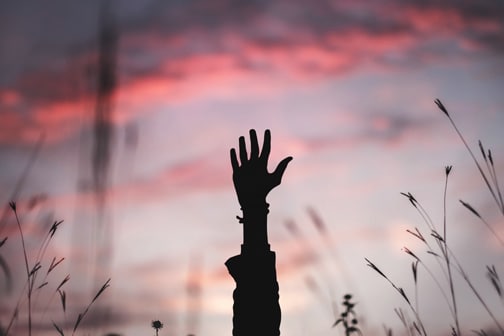 This “bringing us to God” has an Old Testament background where people who were consecrated to special service had to be brought to God. Moses, for example, had to bring Aaron and his sons by God (Ex. 29:4,8; 40:12–15; Lev. 7:35; 8:6,13,24). Nobody comes on his own to God; he must be brought. Just as the mediator Moses led those with a unique ministry into the presence of God, so Christ by His suffering introduces believers to God. This He did through being put to death by men and through being made alive again by God’s Spirit.

By the power of this same Spirit Christ continued His work after His resurrection. He went and preached to the imprisoned spirits. We are not told the content of Christ’s proclamation, but simply the fact of His preaching. Put another way: the fact of Christ’s ascension was itself a worldwide public proclamation of His victory over sin and death.

Nor are we told of the effect of His preaching among His hearers, but from the context we learn that the spirits were brought into subjection unto Christ (3:16,22).

What is meant by “the spirits in prison”? Two choices seem most likely: demonic powers or unbelievers who have died. On the basis of several parallel passages (2 Pet. 2:4; Jude 6; Rev. 18:2 and 20:7), we conclude that the “imprisoned spirits” refer to rebellious angels. This fits well with what Peter writes later in 3:21, concerning Christ ruling over angels, authorities and powers.

These rebellious, disobedient spirits long ago exercised influence in human history, specifically in the time of Noah (3:20). They tried to manipulate people against God. The phrase “days of Noah” characterizes a period of extraordinary disobedience, a consequence of the influence of fallen angels. The ark that was constructed according to divine specifications rescued only a few people, eight in all. Through forty days and night of rain, through all this water, the ark saved the human race.

Baptism is an anti-type (NKlV) of this rescue. For the deliverance of Noah was not symbolic of baptism in a direct sense, but only by way of a negative analogy. Noah’s rescue was the negative of the photograph portraying baptism. The water of the flood had a destructive effect, while the water of baptism, by contrast, provides rescue and protection.

Baptism is a symbolic cleansing, but without the automatic consequence that all uncleanness is fully removed. Therein lies the calling of all who are baptized: they are called to employ their baptism as “the appeal of a good conscience toward God” (v. 21). Baptism brings responsibility and demands a different life: a life through God’s Spirit (see Acts 2:38–40). Baptism exerts a redemptive power in all of life, since it brings to the surface a new motivation. Even though the former pagan manner of life cannot simply be washed away, nevertheless for the future the believer’s conscience remains focused upon God. He is oriented upward! (Question 2)

The power of baptism is the power of Christ’s resurrection. Christians do not live by their own power, but by the power that God demonstrated in the resurrection of Christ Jesus. Baptism seals a redemption that lies anchored in Christ’s triumph.

This risen Christ is at the right hand of God, having gone into heaven (v. 22). His ascension was a promotion that began on Easter morning which demonstrated His superiority over the evil spirits and powers and principalities of the air. It was also a triumphal procession, for when He ascended His enemies were subjected to Him. (Question 3)

For Christians living in Asia Minor—and for those living everywhere in every age—Christ’s victorious superiority is the best guarantee that the invisible powers are definitely defeated (see Eph. 1:20–22; Col. 2:15). This lends confidence to pilgrims evangelizing a hostile world through living with a good conscience. The power of their witness lies not in their words or works, but in Him who has conquered evil and now enables them to suffer for doing good as their witness of faith.

1. Write down a question that unbelievers might ask on the basis of your conduct. Then compose an answer to that question which explains the way of salvation.

2. What is the significance of your baptism for the following:

3. Mention several implications of Christ’s ascension for the church’s evangelism.