IN the precious issue we discussed the Old Testament usage of the term witness.* We turn now to the New Testament. Here we discover a similar though broader usage or the term.

In the Crucifixion Procedure

The crucifixion of Christ came as a result of long lee-al procedure. In this process the Rabbinical idea or witness played its role. The Council wanted to make the trial look good. That it might have a semblance of justice these Messiah-thirsty officers sought for witnesses. “Now the chief priests and the whole council sought witness against Jesus to put him to death; and found it not. For many bare false witness against him, and their witness agreed not together” (Mark 14:55, 56). These witnesses, as was to be expected, didn’t possess the facts. Statements contradicted each other and consequently their accusations fell flat. The council was so steeped in Old Testament tradition that they could not neglect the Old Testament requirements for witnessing. So they endeavored to find witnesses whose factual report would at least give the appearance of justice. Alas, we know how satanic was their transgression of the ninth commandment. We see the same thing in the trial of Stephen, the first New Testament church member to seal his witness with his blood.

Repeatedly we read of the apostles making use of the prophets as witnesses to Christ. Thank God these founders of the New Testament church did not slash the Old Testament writings with the shears of literary and historical criticism. Watch Peter call in the prophets as witnesses for Christ! Turn to Acts 10:43. “To him (Christ) bear all the prophets witness, that through his name every one that believeth on him shall receive remission of sins.” Note bow often the writer of Hebrews calls on the Old Testament law and prophets to establish his case. The Scriptures of the Old Covenant function as witnesses. They appear, under the inspiration of the Spirit, both as accuser and defender. For those who rejected the apostolic witness to the risen, ascended and ruling Christ the Old Testament Scriptures functioned as accuser; for the ministers of reconciliation appointed by Christ the law and prophets became defenders. In controversies with Judaists and Greeks the apostles were assured that the Old Testament Scriptures were on their side. Here is confirmation that the Old writings were used as witness and that this witness had a forensic function both as accuser and defender. This witness gave decisive evidence.

Witness in Hebrews 12 Hebrews 12:1 frequently occasions much fantasy. We read: “Therefore let us also, seeing we are compassed about with so great a cloud of witnesses, lay aside every weight, and the in which doth so easily beset us, and let us run with patience the race that is set before us.” Just what are these witnesses? If we bear in mind the Old Testament function of witness, we can more easily understand this passage. Frequently the reader associates these witnesses with the heroes of faith mentioned in Chapter 11. But this view doesn’t yield much satisfaction. We must not forget that we can think of witnesses in both an active and a passive sense. And there is a great deal of difference between one of whom a witness is made, and the one who makes the witness. Often these witnesses in Hebrews 12:1 are thought of as being completely passive, that is, heroes concerning whom a declaration of strong faith is made. But we then conceive of these witnesses as a group which passively observes our efforts in the race of faith. And here fantasy often begins. Do departed believers see us? It so, how? If not, what is the sense of the passage under consideration?

Now if we call to mind the Old Testament function of a witness this passage takes on real meaning. In Hebrews 10:28, 29 we discover a clue as to what 12:1 means. “A man that hath set at nought Moses’ law dieth without compassion on the word of two or three witnesses: of how much more sorer punishment, think ye, shall he be judged worthy, who hath trodden under foot the Son of God, and hath counted the blood of the covenant wherewith he was sanctified an unholy thing, and hath done despite unto the Spirit of grace?” This same idea of witness comes to expression in Hebrews 12:1.

Under the Old Covenant we know that transgression of God’s law was threatened with terrible punishments. And these sanctions were carried out with rigorous dispatch, that is, as soon as the required witnesses had settled the case. Now we know that one of the main purposes of the writer of Hebrews was to warn against apostasy. This danger was more than imaginary in the case of the addressees. Certainly, if under the Old Covenant men did not escape, how much less now in the new dispensation? The race of faith under the Old Covenant had to be run with vigilance and perseverance. Now these Old Testament “runners” would appear as witness-accusers against those of the new era who ran half-heartedly. The cloud of witnesses are not mere observers, sitting in the grand stand of heaven enjoying the race on earth. Oh, no! They can, so to speak, at any moment assume the role of witness-accuser against a New Testament church which countenances split loyalties.

New Testament race runners must keep this etched clearly in their minds. The cloud of witnesses in Hebrews 12:1 brings to mind Matthew 12:41 ff. “The men of Nineveh…the queen of the south…shall stand up in judgment with this generation.” They function as witnesses. This as well as other passages, see Acts 22:5, 26:5, Romans 10:2, II Corinthians 8:3, Galatians 4:15, illustrate this fact. Witnessing was a serious matter. It was carried on in a courtroom atmosphere. The witnesses could function as either prosecutors or defenders. So far we have seen that the Old Testament usage has influenced the New. 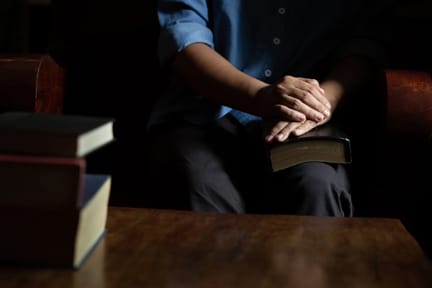 Witnessing as we ought to carry it on concerns Jesus Christ. So we must try to discover what the New Testament means by “witnessing for Christ,” and by “witness of Christ.” We now turn to this phase of our study, bearing in mind what has been written before.

Luke repeatedly speaks of the apostles as witnesses. This isn’t strange since the Savior gave his apostles that name. “Ye are witnesses of these things” (Luke 24:48). See also Acts 1:8. Witnessing was their task, Analyzing this task we discover three predominant characteristics.

First of all, the witness must have been an eye witness. The Jew would allow only an eye and ear witness to speak. Bearing this in mind, it doesn’t surprise us to hear the gospel writers typify Jesus’ work as teaching and acting. This is also why Luke, telling us something about the source materials for his gospel, says that he draws from those “who from the be· ginning were eye witnesses” (Luke 1:2). That is also one of the reasons why the risen Christ made so many appearances during the days after his resurrection. He showed himself no less than 15 times, even to Paul “as to the child untimely born” (1 Cor. 15:8). When the apostles chose a successor for Judas, they insisted that he be an eye witness, Acts 1:21. Peter assures Cornelius (Acts 10) that he saw the things whereof he spoke. Witnesses must be people who know what they’re talking about. They deal with facts.

Secondly, the eye witness must function in a controversy. There is a procedure in progress. In the procedure the witness plays an important part. Luke doesn’t leave us in the dark on this score. God and his people (Israel) had a controversy. Christ was its subject. Although not exclusively, it was nevertheless carried on prodominently before the Jewish Sanhedrin, the acknowledged leaders or the day. In this controversy the witnesses had to chose sides. They had to take their place next to Christ. Jesus himself made this plain. When Jewish and pagan officials dragged them into court, there they would have to stand on the side of Christ. At such a time the Holy Spirit would qualify them to speak. Thus Christ, just prior to his physical departure from the Mount of Olives gave them the promise or the Spirit.

If we bear in mine! this aspect of controversy we can better understand why the resurrection of Jesus played such an important role in the witness activity of the apostles. In the controversies which the apostles had with the chief priests and scribes the resurrection always figured as a powerful fact. Think of Peter on Pentecost, and later as he stood before the officials who forbade him to preach. Think of Paul’s argument in I Corinthians 15:14, 15, “and if Christ hath not been raised, then is our preaching vain (without content)—yea, and we are found false-witnesses of God; because we witnessed of God that he raised up Christ.” The witness who was to take the place of Judas had to be an eye witness of the resurrection. The Pharisees didn’t believe that anyone who had died by crucifixion, an accursed death, could possibly he raised from the dead. The Sadducees denied any type of resurrection. If the apostolic witness was to function at all in Jerusalem, it would have to be an eye witness of precisely that fact, the fact of the resurrection. Thus the witness acted in a controversy.

Thirdly, the witness must have received a mandate. The witness had to be called, There was a specific task upon him. If we read the account of the choosing of Mathias this becomes clear. Of those present many were eye witnesses. But only Mathias was chosen. Through the activity or the group, Christ laid the task upon the heart of Mathias alone. Acts 10:41 speaks of “witnesses that were chosen before or God.” When Luke speaks of a witness, he has this mandate-motif in mind. These three factors were also involved in the witness of character of Paul and Stephen.

Paul’s Usage of the Term

Paul’s usage of the term does not differ materially from that of Luke. Repeatedly he emphasizes the fact that he was an eyewitness of the resurrected Lord; that he functioned in a judicial dispute which Christ had with sinners and that he was specifically called to this task. “Woe is me!” That was the burden on his heart. He had to witness. We need not give the detailed material from Paul’s speeches recorded in Acts, as well as that found in his letters.

For Luke and Paul a witness of Jesus Christ was predominantly a witness of the resurrection. They were eye witnesses. They acted for Christ, on his side, in the great dispute between the Living Lord and the world of unbelief which denies his right to believing acknowledgement and service. These witnesses dealt with the great redemptive facts of God’s program for the ages, Every courtroom, whether it involved an individual like Sergius or Simon Magnus or the intelligentsia of Mars Hill had to hear the facts. They could not escape, The facts of history condemned their un belief or confirmed their faith. The witness con· fronted the unbeliever with facts, not with theories. And whenever the witness confronted the sinner with facts a decision was bound to take place. The apostolic preachers as witnesses drove men to a decision; a vital decision which was concerned with Jesus of Nazareth, the Messiah or God, This is the characteristic usage of the term witness as employed by both Luke and Paul.