War is horrible!!! If you have seen either of the movies, The Patriot or The Saving of Private Ryan, you have a visual reminder that wars are truly awful. I remember rather vividly yet, some 44 years ago, having a close friend come back from Korea. He had served there with the U.S. Army as a medical corpsman. Many nights he could not sleep because of the flashbacks to those nightly trips into the mountains with a “six by six”, inching toward the front lines and loading up the bodies of fallen comrades. Looking for a sympathetic ear, he used to talk the night away, hoping to expunge his memory of those terrible experiences. Most of us, thankfully, have never had to experience that kind of warfare.

Warfare is a fact of history, but it is also a prelude to peace. As one scans the pages of history, one is struck by the succession of wars. There were frequent wars between David’s armies and the Philistines, between Israel and Judah, between Assyria and Israel, between Persia and Greece, between Rome and Carthage, between Rome and the Gauls.

After the wars of Roman conquest, there was a prolonged era of peace called the Pax Romana, i.e., the peace of Rome. Jesus lived during that time of peace, but He reminds us that there would be “wars and rumors of wars” (Matthew 24:6). The omniscient Son of God knew that warfare would be a staple of history, as long as this world was allowed to exist. Our Savior knew that warfare was endemic to human nature. He knew that all of us, by virtue of our sinful character, were inclined to hate our fellow man, those in authority over us, and the God who had made us.

Paul also lived during that era of peace called the Pax Romana, yet he talks repeatedly about warfare. Paul is not so concerned about political wars, or military engagements, but about “spiritual battles” about the warfare that goes on within individual souls.

In order to understand our text, we need to take note of the fact that it begins with a “But”. “But the fruit of the Spirit is love, joy, peace.” 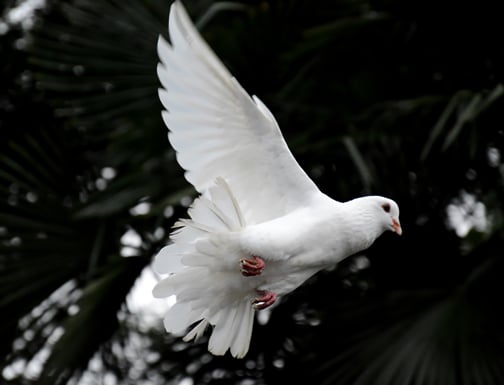 The opposites of peace are the “hatred, contentions, jealousies, outbursts of wrath, selfish ambitions, and dissentions” that characterize us in our natural, fleshly state. Apart from the grace of God, and before the Holy Spirit begins to sanctify us, we are inclined (prone) to hate our parents, our brothers, our sisters, our neighbors, our supervisors, our employees, and everyone else we can possibly hate. Before the Holy Spirit begins to radically alter our characters, we are tempted to shoot up the local high school just as much as those who have hogged our headlines for the past few years. We are just as inclined to murder the boss who fired us, or the girl that jilted us. All of that, says Paul, is the carnal nature that, thankfully, is curbed by the power and grace of God.

When I was growing up, I had a better than average relationship with my father, but it was a long ways from peaceful and far from perfect. We never fought with fists, or guns, or stones, but there was often a nasty tension between us. I didn’t like his rules and many of his decisions. I could hardly wait to get out of the house at the ripe old age of 17 and go off to Calvin College. Dad felt the same way, I think, because he offered me the whole $50 I had saved up from summer jobs at the neighbors, and told me to be on my way. It wasn’t long, thankfully, before I came to realize that he had been right all along, and that I had been seriously mistaken. Before four months had passed, I found a ride back home and confessed to him how stubborn and rebellious I had been. I acknowledged that he was right, and that I was wrong.

Dad accepted my apologies with as much grace and emotion as a Dutch farmer dared to display in those days, which wasn’t much. But I knew that it was genuine, just as he knew my confession was. From that day forward, we enjoyed a wonderful peace. The warfare was over. The battle of the wills was past. He continued to accept his divinely ordained role, and I was willing to submit. My youthful rebellion was finished, and our relationship was recreated at a new, higher, more enjoyable level than either of us had ever dreamed.

That experience, in some small way, has taught me to understand what Paul is saying to the church at Galatia and to us today. Once the Holy Spirit exerts control over our lives, the warfare between us and our Father in Heaven is over. Instead of the anger, the rebellion, the air of superiority, the selfish ambitions, and all the other works of the flesh, we can now enjoy a peace that passes all understanding. Before we are called out of the world, and before we are adopted as Sons and daughters, we are naturally inclined to hate God. We dislike His Word, and we despise His Law.

We rebel against His discipline, and even deny His existence. The physical clash of swords may never be heard, and the roar of cannons may never blast our ears, but the anger seethes within our souls.

Then the Holy Spirit takes control. He roots out the weeds and plants His seeds. In time, as those seeds grow and ripen, fruit begins to appear. On the branches of our lives we begin to see love where hatred had previously been. We begin to see joy where sadness had occupied a place. But, best of all, we begin to experience peace where warfare had shortly before left us wounded. Then healing begins to occur, and life becomes not only worth living, but a foretaste of heaven.

Fruit of the Spirit, Galatians 5:22a, Holy Spirit, peace