Few in North America know the name of Paul Schneider, the first Protestant pastor murdered by the Nazis. Fewer still know the remarkable trial of faith that marked the life of this Reformed minister of the Gospel.

From an early age, young Paul set his sights upon the ministry, listing “the pastorate” as his chosen field of study when he passed the school-leave exam to enlist in the war effort during the First World War. Though wounded and awarded the Iron Cross, Paul remained in service until the end of the war. When he was discharged in December 1918, the young man who returned to the university was an intense and troubled soul, soon swept up in the political and social turmoil of the times.

From high-school on we had a very close friendship but in the semesters at Giessen this came close to destruction because of the radical liberalism to which Paul had completely given himself over. Not a day passed without vehement theological confrontation, on the way to and especially from the university to the station and then on the train. 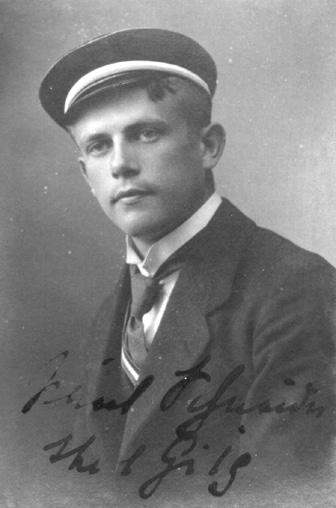 The following years were tortuous for the young seminarian who, at one point, abandoned his studies to take a job as a common laborer in the mistaken belief that only workers’ socialism would rescue Germany from the despair he saw all around him. But God had a different plan for his life. Returning to school in 1920, Paul Schneider took a room at the manse in Weilheim. There he made the acquaintance of his future wife, Margarite. It is during this period that the Lord began again and again to bring Schneider into contact with genuine believers. In one such encounter, following his assignment to the Berlin City Mission work, Schneider would write:

Whenever I have wanted to march out of this remarkable Berlin with its remarkable people, just then God has given me courage refreshed once again, and now I will certainly not leave here before I have gone to the wall with this confrontation. There are actually people here who maintain that they not only intend to know Jesus and seek to follow His teaching, but also to possess Him as the living power of their life …. [they] leave the impression that they really have delivered their lives over to Jesus, loved only Him alone, and that they have really died to everything of their own in wish, thought or feelings.

They impress me as being truly saved. They prove their Christianity in great sacrificial strength and joyfulness. In a quite childlike way they deal with the Savior as with a near and truly living friend who surely listens to all their concerns. I have to say to myself: you are not such a child of God. I feel as if some excommunication …as by so many as yet unexpressed sins, so much hanging onto my own wishes, so much presumption in my own thoughts of Him.

So it has happened that I have now been changed from the subject to the object of the mission.

At the death of his father, the Reformed congregations of Hochelheim and Dornholzhausen issued a call to the young graduate who, according to the rules of the Reformed church, would now be permitted to marry. He was installed on September 4, 1926. We also see a profound difference in his apprehension of the demands of the Gospel.

Schneider immediately began to institute reforms into the congregation, launching Bible studies among the young people of the church, and encouraging them to seek fellowship within the covenant community. Public morality had suffered greatly following the war, and unbelief was rampant. The young pastor and his wife were determined to restore the church to the center of public life in the community, and to reinvigorate catechetical instruction. Little could they have known that the renewed emphasis on the Heidelberg Catechism would cost the young pastor his life.

1933 saw radical change in German life. The Nazis lost little time in consolidating and extending their reach into every sphere of public life. Although Schneider sought nothing more than to serve faithfully as pastor of a small village Reformed church, God chose to place him squarely in the path of the Nazi state. Knowing the folly of political salvationism, Schneider penned a circular letter in which he asked:

Where are those Christian consciences who judge righteously, who take the standard for their politics neither from National Socialism nor from socialism, but rather from the Gospel?

While Schneider did not seek conflict, neither did he run from it if the witness of the Gospel was at stake. He refused to ring the church bell, as required, to signal the beginning of Nazi meetings. He would not return the Nazi stiff-armed salute, and tendered his resignation from church organizations taken over by the “German Christian” movement.

After running afoul of the German Christian-dominated Konsistorium for publicly disagreeing with brownshirt leader Ernst Roehm, Schneider was placed on leave of absence from his ministry. When he returned on January 28, 1934, he preached a stunningly powerful message that shook the Nazi establishment to its core, proclaiming,

Dear congregation, in the last months no thinking, attentive Christian has failed to notice that in our Evangelical church we are being summoned to battle, to witness, to confession …. To be sure, many still sleep … they simply want to accommodate themselves to the church regardless of the practice of the ‘German Christians.’ They must undergird this practice with false teaching: that the foundation of the Church is not the Gospel, the joyful offer of Jesus Christ, the healer of sinners, and the Kingdom of God alone, but rather nationality and the Gospel. Whenever they place blood and race and the history of the people as a source of revelation next to God’s Word, next to His will revealed to us in the words of Scripture alone, next to Jesus as the unique Mediator between God and man, then in truth they fall away from the living God and His Christ ….

Schneider then launched a truly controversial reform for the times, “fencing” the communion table against those in the community who presented themselves for the Lord’s Supper only at holidays, but who were otherwise absent from the life of the church. For his actions, the Konsistorium transferred Schneider to pastor the tiny villages of Dickensheid and Womrath. Four short weeks later, the faith of Paul Schneider would again be sorely tried when, filling in for an ailing pastor, Schneider was forced to rebuke Nazi officials who insisted on invoking Nazi language at the funeral service of a young man who had been in the Hitler Youth.

The final straw came, however, when Schneider took the extraordinary step of asking his church council to begin church discipline against a member who withdrew his son from catechism class. The father, a Nazi sympathizer, placed his son in the Thuringer (Nazi) school, instead. The act of discipline would have to be read publicly three times. After Schneider announced the disciplinary action the first Sunday, he was arrested.

When even the “Confessing” Church leaders backed away from him, Schneider was comforted only by his faithful wife and local church congregations. When he refused to recant, he was subsequently sent to Buchenwald concentration camp. It was in the face of certain death, that the testimony of Paul Schneider was tried, and found to be the most precious gold and silver.

Beaten and humiliated, Schneider never wavered in his Christian testimony. When he refused to remove his cap at the prisoner’s assembly when the Nazi anthem was played, Schneider was beaten severely, and placed in solitary confinement. A fellow inmate at Buchenwald, Alfred Leikam, remembers the day clearly:

Wholly without fear, he bore witness of his Christian faith to the SS. In this frankness, he was probably unique in Germany. He called the devil by his name: murderer, adulterer, unrighteous, monster. Throughout this witness, in which he presented the grace of Christ together with a call to repentance, Schneider was exposed alternately to severe bodily tortures, humiliations, and agonies …. heavy beatings, dangling up off the floor at the window crossbars…. Schneider was utterly tireless, always calling out words of Scripture to other prisoners, especially mornings and evenings at the count for roll call ….

On a January morning in 1939, when two prisoners who had escaped and been captured were murdered in the cell block, Schneider called out during the roll call “In the name of Jesus Christ, I bear witness to the murder of the prisoners,” before he was silenced and subjected to a new round of beatings. The Konsistorium proceeded to formally remove Schneider from his pastoral charge.

In the month before his death, his condition deteriorated, as he was placed under the personal oversight of SS-Sgt. Martin Sommer, a notoriously abusive bunker guard. In July, 1939, Schneider was ordered to walk the half-mile journey from his cell to the camp infirmary, where he was to be “treated” by the camp physician, Dr. Ding-Schuler. An inmate medical secretary, Walter Poller, writes:

I received Paul Schneider for the first time face-to-face. He was suddenly brought into the prisoner sick-bay by SS-Sergeant Sommer. What an appearance! …how could this man be alive? In this condition, unaided and tottering but still in his own strength, how could he have walked the long way?

Paul Schneider never left the infirmary of Dr. Ding-Schuler alive. On July 18, 1939, Margarite Schneider would receive a telegram announcing the death of her beloved husband, and advising her that she must pay within 24 hours to recover his body, or it would be cremated.

The body of Paul Schneider, in a sealed casket, was returned to Dickensheid. The elders of his church bore the casket through the streets to the church filled to overflowing with his parishioners. At last emboldened, his fellow pastors found their courage as more than 170 in their pastoral robes and another 30 in plain clothes followed the casket through the streets. As the procession passed the Roman Catholic church, the priest fell into line in the procession, followed by his congregation.

In his poignant telling of Paul Schneider, The Witness of Buchenwald, Rudolf Wentorf notes that commandant Koch, of the Buchenwald concentration camp, was eventually accused of corruption by the Nazis, and executed shortly before the war’s end.

Dr. Ding-Schuler was arrested as a war criminal, and hanged himself.

The bunker guard Sommer was transferred to the front, and severely wounded. Tried in 1958, his unspeakable atrocities were made known before the world.

Unable to care for himself, Sommer spent the rest of his life in a nursing home run by Christians.

Mr. Wayne Johnson is an elder at Sacramento Covenant Reformed Church (RCUS) and a member of the Board of Governors of City Seminary of Sacramento.