A young lady of some twenty-three years of age is deeply depressed. She can see no light and she has no hope. She feels she hasn’t a friend in the world. Even God is no longer her friend, the young woman feels, and the name of Christ her Savior leaves her untouched except to draw from her a sound like a moan.

Until just recent days she has appeared to be a very normal girl. She sang in the church choir and taught a Sunday School class. She seemed to be highly spiritual. In fact, she had a reputation for just that. So her acquaintances are very much surprised to observe her behavior. They just can’t understand it. It seems utterly out of harmony with what they thought they might expect from this Christian girl.

Her friends come to see her. What do they say to her? This is what they say, “If you will just really believe in Christ you will be all right.” Meaning to be helpful others say, “Believe hard and pray hard and the Holy Spirit will give you joy again.” Still others say that they just can’t see how anyone who has known the joy of fellowship with Christ can possibly give way to dejection like this. How cruel such well-meaning “friends” are and how subtly and blindly self-complimentary.

The pastor comes to see her. She has had her conversion experience under him. It had been a very happy experience, some five years before. It had been the richest episode in her life. She had been converted under the spell of the promise that if you accept Christ as your Savior you will have victory over all of life’s problems. She believed that steadfastly. It seemed such a beautifully simple solution to the yearnings of her life. Now she felt doubly distressed because of the apparent failure of the factor in her life which had meant most to her and which had been so wonderfully sustaining.

The pastor was perturbed too. He couldn’t understand that one who had had such a rich conversion could slip into a slough of despondency like this. He just couldn’t figure it out. Had she slipped into grievous sin? Was she “hiding something from the Lord”? He hinted at these things as he talked and prayed with her, and his prayers with her had in them strong pleas for forgiveness.

The details given in the above case are fictitious, of course. No one who enters into the inner chambers of a soul may divulge the things he finds there. However, these fictitious details are not made out of whole cloth. Problems like this one are constantly presenting themselves to any one who deals with the inner lives of people. In subsequent discussions we shall present similar pictures of troubled personalities. These pictures will also be made up of fictitious details. But these fictitious details will make up composites of real life situations. 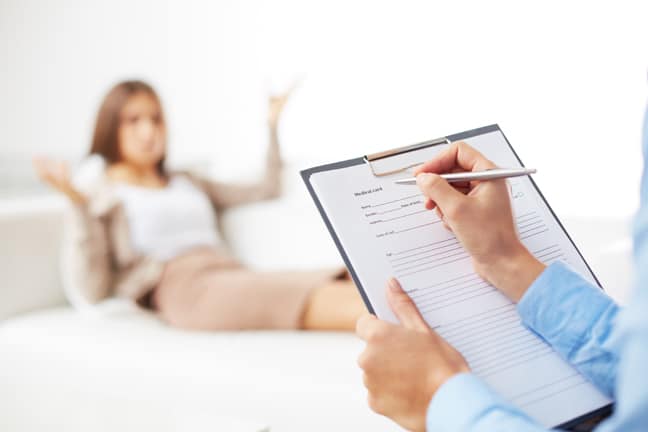 Now let us go back to the case with which we started. There are several observations we want to make in conjunction with this very much abbreviated account of a sick personality. The first observation we should like to make is this. Christian people can and do get mentally and psychologically sick. Not infrequently we read or hear comments to the effect that mental illness is on the increase because people are deserting the comforts and sustaining power of religion. The same comment is made conversely, namely, that if people would only return to religion not so many of them would become mentally sick.

What shall we say about such comments? Are they correct? Such comments have to be handled with great care. It is perfectly plain that any satisfactory answer to such comments would have to be based on thorough statistical studies, studies which would be hard to obtain in a reliable form and which are to the writer’s knowledge non-existent. Furthermore, a visit to institutions like Pine Rest, Christian Sanatorium and Bethesda will teach one to handle such comments on religion and mental health with great caution. Those rendering such opinions uncritically should take note of implications these notions have for the mentally unstable and ill. And people holding such opinions should bear in mind that many of those who are mentally sick today were mentally well yesterday so far as the average observer could detect.

Christian people do become mentally sick and psychologically off balance. However, there is evidence apparent to anyone working with the mentally ill that such sick people gain very real support and strength from their faith — a support which sustains them and helps them on the road to recovery. This is true especially of those whose personalities have been infused with this faith in the younger, formative years of life. Even among people who suffer the mental breakdown of old age, one often finds those who gain great comfort and support from a Scripture passage or a hymn when almost all else has faded from memory.

There is good reason to believe that sturdy faith renders great service in the prevention of mental illness. Many a person going through the fires of trial has testified that he would certainly have gone mad had it not been for the strength and support given by his religion.

But here again one has to be careful. Many a person who would be regarded as having true faith has become mentally sick. (We are thinking of those mental illnesses which are properly called personality disorders not of those illnesses like senility or general paresis, which have their origin in demonstrable physical breakdown. This distinction will be fully dealt with in a later article.) It would be most unkind and inaccurate to imply that every person breaking down in mental illness was therefore giving evidence of a lack of faith. How obnoxious was the attitude of a visitor to a Christian menial hospital expressed in her last words to her niece after a visit: “The trouble with all you people is that you don’t really believe in Jesus Christ as your Savior.”

Then there is another count on which we must be careful in assessing the preventive value of religion in mental illness. This point is rather fine and may prompt some readers to disagree. A standing rule in all counseling with people suffering from personality disorders is that the opinions on his condition given by the sufferer must not be taken at face value. Every such opinion must be carefully examined in the light of the total personality picture and in the light of greater insight into personality problems which the examiner ought to have. So likewise when a person says that his religion kept him from mental shipwreck in a certain crisis, one has to handle such opinions with great care. Such an opinion may be wholly correct. There is good reason to believe that it is when wholly correct. Such an opinion may be partially correct. Docs that seem rather hard to attempt? Well, let’s think again of the religious person who broke down in a similar crisis. If faith in the true God is to be regarded as having kept a man sane in the one instance, then must we tell the one who broke down in II similar crisis that his faith wasn’t good enough or wasn’t the genuine article?

We arc in deep water already, it seems. But we arc simply trying to show how complex this relation between religion and mental health is. And we arc trying to rid ourselves of over-simplified answers to difficult problems. How utterly over-simplified, for instance, is the attitude reportedly held by a prominent American clergyman. It is reliably reported that this man dismisses mental illness by saying that it is another name for “sin”. No opinion on this subject could be more shamefully untrue or indicative of abysmal ignorance.

By now we should be ready for a statement of the vital point which should have been known by the pastor and friends of the twenty-three-year old patient. If the pastor and acquaintances had been aware of this vital point then would not have approached and tormented this girl with veiled implications of guilt and Faithlessness. The vital point is that in the effort to understand the case of mental illness or disorder we do not look first of all at that person’s religious attitudes. Rather, we try to discover the important facts in that person’s emotional life from his youngest years onward. Has the person sustained injuries to his inner life which have damaged his emotional stability and security?

Careful study of hundreds of case histories has convinced the writer of the basic accuracy of this approach. Other factors arc usually involved factors of heredity, or of the condition of the body. But the real clue lies in that deep, important area of life which we refer to as our “feelings”, our “emotions”—an area which most of us try to hide from others and also often from ourselves.

Then follows the important question for the pastor. It is this question: Have the natural and spiritual elements in the emotional life developed into a sound and wholesome religious life, a religious life in which religion has not served as an escape from required adjustments in life, and in which spirituality docs not serve as an escape from one’s own physical self? Has the religious experience tended to strengthen and intensify a basically faulty pattern of life? Or has the religious experience been the ripening of an inner life into a deep serenity of soul as the person grows into a richer fellowship with the great God who orders our lives in sovereign wisdom and in wondrous love?

These are some of the many questions which must be dealt will in any treatment of the subject of mental health in relation to religious experience, The course before us should prove to be highly adventurous, a course that will prove to be treacherous and dangerous at times, and deeply satisfying in its insights into our inner life at other times. In these discussions we have the pastor in mind particularly. What is his role in dealing with personality disorders? Does he have a proper task to do in the business of healing sick minds? Is there properly such a field as pastoral psychiatry? Psychiatry means the healing of the mind. The term psychiatry differs from the term psychology in that the latter term refers simply to the science or the study of the mind. In Great Britain psychiatry is called medical psychology. Does the pastor have It place in this field, or is he transgressing on territory which belongs to another profession?

The place of the pastor in the work of dealing with the mentally ill and distressed have grown in prominence in recent years. A national organization of mental hospital chaplains meet at the time and place of the sessions of the American Psychiatric Association each year. In many such hospitals the chaplain has staff status and attends staff meetings along with the doctors.

These and many other questions lie ahead of us in a series of articles which, are aimed to be of interest and benefit to our readers.