It was August 1, 1990, about a month after rebels had captured the city suburbs just a mile from our home. Just yesterday, angry government troops massacred nearly a thousand refugees at early dawn in the St. Peter’s Lutheran Church in Monrovia. Our little neighborhood had become a ghost town of shelling and bombing, driving away all life. It was a miserable time with death lurking so close by. We had prayed all night and knew that it was time to evacuate or the soldiers would get us too. So, our family joined the exodus of hundreds of thousands into rebel-held territories.

As we made a desperate journey with thousands of others, suddenly, there appeared a host of government troops pointing guns at us. We were doomed today, we thought. Our legs began to shiver—fear gripped all of us. Just a few desperate soldiers with automatic guns—and had we forgotten the God who created the world?

“I will shoot everyone!” a soldier shouted above the fearful crowd. “I have lost my mother, my father, my sisters and brothers; I can kill anyone!”

They would not allow us to flee to rebel-land for fear that we could ourselves become rebels. They defended “their” government with bloody hands and bloody hearts. They tried separating us by turning back all the men and teenage boys. The men could be executed after the separation.

The crowd ran back quickly. It was better to turn back than see the men shot. But Mien-Too, my husband, would not let us follow the crowd. The ten in our household stood, refusing to obey. MIen-Too began to walk towards the soldiers while my mother and I pleaded with him. I held on to his shirt sleeve.

“Please don’t let him shoot you.” I had forgotten our Lord.

The angry soldier shouted, ordering us to turn back, and when we didn’t, he tried to fire. The gun wouldn’t. He attempted again, but it didn’t. He stood, looking at Mlen-Too as the thousands turned back, leaving ten of us in our household standing before him.

“Why don’t you turn back with the crowd? You’re not afraid?” Suddenly, he seemed to be the one afraid. Another soldier drew closer, seemingly out of shock, and began to caution them not to shoot us.

“Do not shoot these people; look at them; they aren’t rebels.”

Quickly they held a ‘cabinet’ meeting among themselves in the middle of the little street. An emergency session was called. They could not handle one man and his little group even though they had just massacred hundreds.

They decided to let us go if we would pay a fee of twenty-five Liberian cents each.

Twenty-five cents to people who could kill anyone, who had lost mother, father, sisters and brothers and were afraid to let us into rebel lands? I laughed softly, like Sarah, not quite believing what was happening. One of the mad soldiers looked at me, awed—totally mesmerized. They couldn’t understand.

“What if I give you five dollars? Will you let all the thousands go through?” I asked, looking at the desperate crowd of at least six thousand. I couldn’t even see the end of the group.

“You see, we are people of God and we love everyone of you,” MIen-Too said as I took a five dollar note from my purse, handing it to the desperate soldier.

As we and all the crowd walked through, they waved us away and in a chorus, said, “Pray for us when you go.”

An American would say, WOW! Have you ever wondered about your own trials? Why they came at the time they did? Why the Lord hadn’t spared you such difficulties? Many of us have wonder.ed, like you. Sometimes, I get the picture of the Israelites running from slavery in Egypt and then coming suddenly to the Red Sea.

“What? There is a mighty sea!” they must have cried. Then, within minutes, God was partIng the sea in two—the heavy waves were rolling—“b-l-o-o-o”—before their eyes. And they stood, awed; this wasn’t real. You mean, the Red Sea was being split in two equal halves just for these people who had been nothing but slaves in Egypt?

Sometimes I picture Peter, standing there, awed that this Jesus, his own personal friend, was walking on the water. “Of course,” he must have felt, “I can too.” I picture him telling Jesus, “Lord, if it’s you, tell me to come to you on the water.” 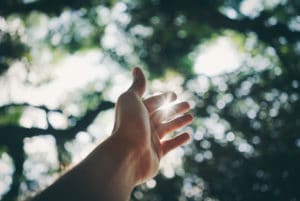 Then on Peter’s journey across the water, he sees the waves rolling high and the wind tossing everything about. He begins to tremble. Peter, the “Rock,” becomes suddenly afraid and begins to sink.

Have you ever felt yourself sinking—even though you felt that you were a “rock”?

Often, I wonder why God allows the storms at all? But I am always reminded of what God did when Peter said, “Lord, save me.” Immediately Jesus heard him.

And how God must have stood there beside Moses and the complaining crowd at the Red Sea.

“You mean he brought us here to drown?”

God, the Mighty One, our King of kings, the Creator of the waves and the wind, and the skies, looked at His faithless children standing at the edge of a mighty sea, and ordered His creation to spilt In two. And His children walked safely on sand to the other side.

If you ever find your mind wondering again, remember that the Jesus, Who is able to make us walk on water, still parts the Red Sea today. Read Joshua 1:9.

Patricia Jabbel Wesley, her husband Mlen-Too and their three small children survived a year of tile Liberian civil war and moved to the US in March, 1991. She teaches writing at Davenport College and GVSU. She and Mlen-Too work with Intervarsity Christian Fellowship among international students in West MichIgan and attend FIrst CRC in Byron Center where they now live.