(The writer wishes it to be understood that he had no particular consistory and congregation in mind in describing present customs and practices in nominating find choosing pastors.)

It is safe to say that many members of our churches feel that something is wrong with the system of calling ministers in the Christian Reformed Church. Expressions of that sentiment are not infrequent.

First, something is wrong with the method which consistories ordinarily follow to prepare nominations of the ministers which they will propose to the congregations.

All will agree that it is both proper and necessary for consistories to present nominations of prospective ministers to the congregational meeting with the understanding that the choice of the members is limited to those nominated. Consistories may be presumed to know more about the ministers in our Church than the ordinary members of the congregation. They also have a better comprehension of the needs of the congregation which they serve. However, as our denomination grows and the number of its ministers increases from year to year it becomes increasingly difficult for our elders and deacons to know these ministers. When our denomination was small and our ministers few it was not unusual for consistories and their congregations to know all our ministers by name and to have a fair knowledge of their talents and personal characteristics. That time is past. The great majority of our ministers are unknown quantities to our consistories, and even more so to our congregations. 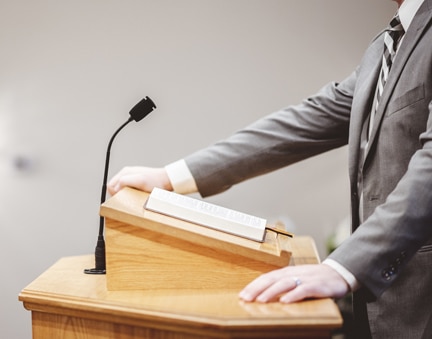 In view of the circumstances· just mentioned consistories of pastorless. churches face a difficult problem; namely, how to obtain reliable and adequate information about prospective nominees. Various things can be done to obtain some of the desired information, but none of them seems to be regarded as sufficient. For we know of no elder or deacon who takes the easy position that every minister in the church who is eligible to a call because he has served his present charge longer than the prescribed two years is qualified to serve any church in our entire denomination. All are convinced that some efforts should be put forth to and the kind of men who are judged fit to serve in a particular church. TIle needs of churches vary conSiderably, depending on their size, the educational level of their membership, and the problems which are peculiar to them.

A much less radical but almost equally reprehensible attitude is that though consistory and congregation know little or nothing about a nominee, the Holy Spirit will so direct the voting that if the man who is called accepts, the church is sure to receive as its minister “the man of God’s choice.” This is bad theology. We should earnestly pray for God’s guidance but we should work as well as pray for it. The Lord’s providential guidance cannot be expected to do for us what we can do for ourselves. It is an unhealthy mysticism which holds that the Holy Spirit is sure to guide us even if we fail to do all we can to promote our own welfare and that of the church. To be sure, God may mercifully prevail over our mistakes. He may do this by constraining a pastor-elect to decline a call whose acceptance might be tragic for himself and the calling church. But such divine guidance never justifies our lack of insight where better insight was possible; nor does it guarantee a merciful divine interference.

What Can Consistories Do?

But how shall consistories learn to know the facts which they should know concerning nominees under consideration?

First of all, they should leave no stone unturned to gather all reliable information which is available, instead of giving ear to rumors, one-man reports, or judging a minister by his popularity as reflected in the nominations and calls reported in our church papers. They should seek especially the advice of their counselors.

Second, consistories do well also to gain the advice of mature Christians who are known to be familiar with the personality and the work of ministers under consideration. But an even more reliable source of information is the consistory of the church which the nominee is now serving. We understand it is common practice in the Reformed Churches of the Netherlands to consult such a consistory. The calling consistory sends out “hoor-commissies” (auditing committees) to various churches. Such a committee first listens to a sermon by the prospective minister-elect in his own church and then it meets with the consistory of that church to inquire about their pastor’s family life and his work as preacher, teacher, and shepherd. At least, this we have gathered from the occasional references to the subject in Dutch church papers. We know of no reason why this kind of inquiry should not be pursued in our Church.

The Line of Least Resistance

The suggested methods of inquiry sometimes seem too tedious -so that consistories prefer to follow the line of least resistance. Long hours are often spent paging through the latest Yearbook of the Church and listing the names of the ministers whose names are suggested by the various members. In the absence of well authenticated facts, the danger exists of passing judgment, favorable or unfavorable, on mere bits and wisps of rumor. Pastor A’s name is removed from the list because one of the members of his present church once complained he had been neglected in a time of illness. Perhaps he had not taken the trouble of letting his minister know that he was sick! Pastor B is passed by because his wife is regarded as being quite unsociable. Pastor C’s name is stricken from the list because his church is near Grand Rapids and his children are now attending Calvin College.

At last a rather small list of names is left and some of these are of ministers concerning whom the consistory has heard nothing unfavorable! Such names may appear on the nomination and may receive a majority of the votes in spite of the fact that the men have never preached in the calling church, have not! been heard in their own pulpit by any member of the calling consistory, and are almost unknown to the members of the congregation. But no one has said any evil about them and—best of alI they are still under 45! Strange, even in the church we meet with a number of people who love a “dark horse” and find some delight in this sort of pious gambling—that is, in taking a chance, trusting that the Holy Spirit will bless the procedure.

What About the Congregation? Congregations often complain that they know little or nothing about the ministers nominated by their consistories. There is much to justify such complaints. Consistories seldom give those who attend the congregational meeting where a minister is chosen the benefit of all the information they possess. As a rule only the names of the churches now served by the nominees and the length of their ministry in these churches are mentioned. True, consistories naturally hesitate to tell all they know about the “candidates”; they might reveal their preference and the congregation might resent being “influenced” by the consistory!

Such an attitude on the part of the congregation would be hard to justify. In fact, there would be nothing against consistories urging the congregation to vote for a certain minister as their pastor. If consistories have both the right and the duty to give leadership to the congregation and make proposals for its spiritual welfare, theirs is both the privilege and the duty to do this in the all-important matter of electing a minister. This is in fact precisely the method followed in some other denominations in this country. The consistories go to great length to “find” the minister whom they believe the church should have and then propose his name alone to the members of the church for their approval. There is nothing in the Word of God or in our conception of the ruling office of the Church which condemns such a procedure.

Our point is especially this: The congregation must be able to elect a minister as intelligently as the consistory to nominate such a minister. Today our congregations often vote in the dark, in ignorance, and that in one of the most vital and important activities in which a church can engage! Let the reader judge whether this is right and conducive to the welfare of the church.

That confidence is not always present. It has happened on several occasions that ministers with considerable experience in church matters were requested by consistories to present some names of men whom they deemed qualified to serve in the church concerned. Interesting stories could be told about the non-appearance of any of the suggested names on subsequent nominations.

On one occasion a very reputable minister in our Church was asked. by an elder whether he could name a person who would make a good minister in the elder’s church. The answer was Yes. But when the name was mentioned, the elder suddenly became suspicious and asked: “What is wrong with him where he is now?”

In the light of such experiences it can be understood why some of our leaders refuse to give any advice to consistories concerned.

We feel we should add that we know of consistories which not only request information regarding possible ministers but also thankfully make use of the information given them.

May it not be that the time has come for our Synod to appoint a Committee on Vacant Churches—the name is immaterial—charged with giving confidential information both to ministers who feel the need of a change and to consistories which need information about men who can fill their vacancy. We realize this is a delicate matter and it is a question how many churches would avail themselves of the services of such a committee. But we feel sure that some consistories would seek their help and profit thereby. For one thing, such a committee could dispel many unfounded rumors that are afloat about ministers and churches.

One thing is sure: The larger our denomination becomes the more difficult it will be for consistories to make intelligent nominations of prospective pastors.