The term “conservative” when employed theologically is frequently applied to a certain type of thinking which bases itself upon the Bible as the Word of God. and which holds to most of the “fundamentals” of the faith historically taught by the Christian Church. From the point of view of one who is interested in maintaining an orthodox Christian witness, therefore, the term is valid and generally acceptable.

The serious danger involved in the use of the word “conservative” is, however, that only too often it is regarded by those to whom it is applied as being a valid description of what should be the dominant characteristic of their lives and thoughts. They seem to take it for granted that the Christian should be conservative in politics, economics, artistic taste and in every other aspect of existence. Conservatism has thus come to be regarded in many circles as the only valid expression of a truly Christian life. Orthodoxy is “right wing” Christianity.

Such an attitude would seem to be somewhat out of line with the Biblical position which is by no means conservative. Rather, the Bible and all that stems from it, is fundamentally “radical” in its approach.* It rejects the idea that any human production, whether a mechanical gadget or a form of government, is perfect. Man as he is, as well as everything he does and all that he creates, suffers from the defilement of sin, and so is never perfect or final. Coming under the judgment of God, he and his works are acceptable only in and through the righteousness of Christ. 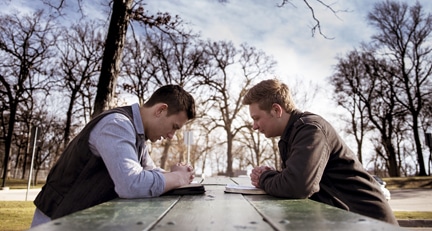 This estimate of human endeavor applies even to Christian thought itself. For instance the sixteenth century Reformers accomplished great things in their own day, but there must be a continual willingness to re-examine their views, for they were not infallible or perfect, and as one of the old Puritans said: “There will yet break forth much new light from the Word of God.” While employing the Reformers’ work as a foundation, one may never stop there, but must go on to develop and at times correct their ideas in the ever growing radiance of God’s Word.

In the same way must the Christian deal with other areas of life. Many Christians today seem to hold as in· fallible economic views current before the Industrial Revolution, scientific interpretations pre-dating Isaac Newton, to say nothing of Einstein, and historical concepts propounded by Bishop Ussher who wrote the chronology still appearing in some Bibles. But the Christian may never accept any man-made scheme as final. Although unbelievers may frequently adopt such a “conservative” attitude, the Christian must be critical, not superficially or emotionally, but radically—down to the very roots of human thought.

When faced with human scientific or philosophical systems. the Christian must insist that only one of two approaches or interpretations of reality is possible. An interpretation or philosophy either honors God or it honors man; it either regards God or the created universe as ultimate. If man and the universe are made into “god,” then by virtue of their inner contradictions the Christian believes. such systems of thought will eventually prove to be self-destroying. This is the truly Christian radical approach, so necessary in the present age and far more fundamental in its analysis than anything ever invented by a Karl Marx or a Jean Paul Sartre.

And for the Christian what should be the result of such analysis? In the light of his own critical approach. the Christian must assume the responsibility of not merely pointing out the weaknesses of humanistic and materialistic points of view but of contrasting with them the truly radical Christian interpretation of the universe in which men live. Those possessing a thorough knowledge of the various fields of thought should set forth the Christian understanding of politics, economics, history, science, and whatever other aspect of reality man may know. This is Christian radicalism stated positively.

Such radicalism, it is well to note, has always been closely related to the renewed and revived preaching of the Gospel. The Lord, Himself, was a true radical who came to call sinners, and not the righteous and apparently good conservative people to repentance. Indeed it was His radically new interpretation of the Old Testament, His radical proclamation of man’s need for regeneration, and His demand for repentance and faith from all men that finally brought Him to the cross. And the diSciples whom He left behind were equally radical, being termed “those who have turned the world upside down.” Although they did not succeed completely in their laudable aim, it was the radical post-apostolic Church which eventually conquered the Roman Empire revolutionizing western society.

Such radicalism was characteristic also of the Protestant Reformers. All one has to do is read the diatribes of Roman Catholic pamphleteers against Luther and Calvin and their views, to see that they feared the new radical ideas, more than most westerners today do Communism. Out! of the Reformation came numerous revolutionary movements such as the Puritan revolt in England, the American Revolution, the abolition of slavery in the British Empire and the successful demand for factory reform by men such as Shaftesbury. The Reformers and their successors made countless contributions to science, art, politics, economics and the like, but they did so not because they were “conservative” but by virtue of being radicals who were willing to test all things, holding fast to that which was good. They demanded that man’s life be oriented not towards himself or the material world, but to the Triune God, the Give, of all good gifts.

Human conservativism and human radicalism are all of a piece. Based on man, his rational and emotional faculties and directed to his own glory, they are really not very different from each other. It is only the Christian “conservative-radicalism” which is truly different and able to formulate a new approach to the contemporary situation, for Christianity alone seeks to bring every thought into obedience to Christ. This is the true radicalism of “conservative” Christianity.

*As Dr. Reid himself explains further in the article, the term “radical” is used by him in its original and most literal sense, as that which goes down to the very root of things. “Radix” is the Latin word for “root.”