“Hail Mary, full of grace, the Lord is with thee. Blessed art thou among women, and blessed is Jesus, the fruit of thy womb. Holy Mary, Mother of God, pray for us, sinners, now and in the hour of Our death. Amen.”

As children of the Reformation what shall we say of these things? This prayer constitutes one of the heart-beats of Roman Catholic liturgy. It is laden with deeply religious significance. Yet Rome insists that its Mariology, and the piety attached to it, is not a transgression of the first commandment. Veneration is paid to Mary, not worship. This veneration in no way violates the Biblically established distance between the divine and the human, nor the uniqueness of Christ’s person and work. Mary’s praise never has the effect of eclipsing the glory due to Christ the Mediator. Mary and her Son are indissolubly bound together in realizing man’s hope of salvation. This cooperation is free, however, of all confusion, just as the sun and the moon are unconfused. What the sun is to the moon, that Christ is to Mary. Hers is only a reflected glory.

Is it true then, after all, that this phase of the Rome-Reformation conflict is simply one grand misrepresentation and misunderstanding? Or is it still true that the brilliant light of Catholic adoration beamed upon Mary casts a shadow over the Christ of the Scriptures, obscuring the exclusiveness of his redemptive work and detracting from the absoluteness of his claims regarding himself? This article is aimed at explicating the Reformation’s affirmative answer to the latter question and its negative answer to the former question. The conflict at this point is real. For Mariology constitutes a breach of Scripture’s declaration that Christ’s name is the only name given under heaven whereby we must be saved.

The Council of Ephesus in A.D. 431 referred to Mary as the “Mother of God.” The passing centuries have made it abundantly clear that Rome views this Theotokos expression in a radically different light than the Reformation. Without doubt the early Church Fathers at Ephesus employed this term to define orthodox Christian Christology in opposition to certain Nestorians, who sought to drive a deep wedge between the human and divine natures of Christ. As Mariological traditions grew, however, a significant shift of context set in. Persistently Catholicism seized upon this expression to bolster its Mariology, thus bending it to an end at variance with its original usage.

From all this one thing at least is evident. In its Mariology the Vatican always has and still does assume a strong, deliberate position. There is an undeniable consistency in this unfolding pattern of Church dogma. Mariology is not a loose appendage to Roman Catholic theology. It is an integral part of the whole. Consequently it is simply one more outlook upon that decisive crossroad which marks an irreparable pro·ting of the ways. Recent Mariology has served only to deepen that rift. 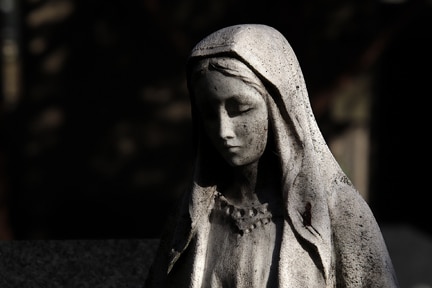 Behind the dogma of Mary, as its silent background and the spiritual soil out of which it grows, is the deeply embedded concept, which is inherent in all Catholic thought, and which undergirds it, namely that on the strength of a prevenient grace (meaning a grace which precedes repentance and faith, enabling the recipient to respond to God’s demands and the call of the gospel Ed.) man is free and able to cooperate in working out his own salvation. Of this Mary is the supreme example.

When the angel Gabriel appears to her to announce the birth of Jesus the Savior, Mary in reply offers her fiat, her willing consent, upon which the Virgin Birth is made contingent. She declares: “Behold the handmaid of the Lord; be it unto me according to thy word.” Hereby she indicates her readiness to perform the role assigned her in God’s plan of redemption. The initiative is divine. Yet somehow, along with this sovereignty of divine .grace, real cooperative and meritorious value is ascribed to Mary’s worthiness and receptivity and willing endorsement of God’s proposal. Mary exemplifies the epitome of human cooperation in God’s program of redemption. It is therefore reasonable that she should be granted priority in the glorification of body and soul via her Heavenly Ascension.

We are confronted here with the Roman Catholic “and” in its deepest meaningfulness. Just as faith and good works, Scripture and tradition stand together, so here Christ and Mary. This is the so-called complexity of Catholicism, in four-square contradiction of the so-called simplicity of the Reformation’s assertion of Paul’s teaching that by grace alone have ye been saved, only through faith in Christ, who bears the only name which answers man’s need.

Were these dogmas of Mary based on Scriptural truths, which may not be silenced, we would be obliged to bow to them. In fact, however, we are faced here with an eclipse of the gospel more thoroughgoing than perhaps at any other point in Catholic dogma. If it has been difficult for Catholic theologians to vindicate Biblically many previous papal decrees, it will prove completely futile with recent developments in Mariology. They stand in flagrant contradiction to the most fundamental motives of Scripture. Instead of proclaiming Christ, and him only, they detract in a most serious way from the all-sufficient character of his atoning work.

Rome emphatically insists that it makes no pretensions to deity for Mary. It wants to maintain its trinitarian orthodoxy. Mary is admittedly placed as close to the throne of God as it is possible for a creature to be, yet short of deification. She is Daughter of God the Father, Mother of God the Son, and Bride of God the Holy Spirit. She is Queen of Heaven. But she occupies this supremely glorious position precisely as a creature. She was, after all, such a purely holy and fully consecrated person, that this singular honor was properly bestowed upon her, and that by personal merit.

Here again we touch the heart of our criticism. This dog m a presupposes that a creature can cooperate in his own salvation and in that of others. Rome teaches that just as the Mother Church has been ordained to distribute grace unto salvation, so the Mother of God has a peculiar responsibility in this same work. As creature she is a divine helper and as such so completely an extraordinary creature that, despite all Catholic protests, the line between the human and the divine threatens to become very thin. One feels throughout a relativizing of the basic truths of Scripture and a leaning on popular piety which borders on a dogmatically sanctioned transgression of the first commandment.

When we turn to Scripture, we find there a picture of Mary which is in itself the most convincing indictment possible of Roman Catholic Mariology. Soberly, respectfully, she is pictured as the blessed virgin and the mother of Jesus. At the same time she is like unto us in all things, sin included. As believer she is justified before God by faith in Christ, her Son after the flesh. Yet as sinner she too falls under divine judgment, and escapes that judgment by taking refuge in the same blood which saves us all and by confessing with us the only name given under heaven whereby we must be saved. Her faith was great. In that she remains our example. Yet she with others was slow of heart to believe all that the prophets foretold about Christ’s life and death. She withstood him more than she supported him. She misunderstood him as long as she insisted on standing at his side, and understood him only after she took her place on the side of fallen mankind. Christ was compelled at times to reprimand her wrong insights, and once left her standing outside the door with the remark: “He who does God’s will, he is my mother.” As time went on Jesus gradually relinquished Mary as mother, and Mary in turn had to exchange Jesus as son for Jesus as Savior. On the cross Christ appoints Mary a new son, the apostle John.

In the New Testament Church Mary did not occupy a position of exceptional honor, to say nothing of supernatural honor. She was one among others, all living by the grace of God. She was indeed held in high esteem as one highly blessed and as mother of the Lord. Still she was content to be known as one of low estate, the obedient handmaid of the Lord. Like us all, she was a tried and tempted believer, sharing alike in the commOn solidarity of human sin and heir also of the promise of eternal life.

This is precisely our comfort. For thus her life becomes a priceless hymn of praise to the unspeakable gift of God in her Son. The Roman doctrine robs us of this comfort by exalting in Mary not primarily the greatness of God’s mercy, but the high virtues of the creature. She is elevated above the communion of those who to their dying breath are saints and sinners. An unbridgeable distance is projected between her and us. Henceforth she belongs forever to the order of Christ, sharing with him the first-fruits of full glorification. She is released forever from the changing scenes of our lives.

The gospel is clear, however, that in this dispensation the image of man exalted to God’s right hand is represented only in the glorified Christ. He is the New Man, and he alone. In its Mariology Roman Catholic theology projects prematurely into this age that which belongs only to the age to come. In all this lies the very real danger, that Rome will be led to place increasingly less emphasis on the true humanity of Christ, allowing it to be concealed within His deity, while his humanity becomes more and more reflected in Mary. Thus the way may be paved for attributing greater mediatorial functions to Mary. In the measure that this takes place the believer is deprived of his only solid comfort, namely that in Christ Jesus God became Man, like us in all things, sin excepted. Nothing of this may be sacrificed in any way.

What true veneration of Mary should consist of may be learned from Luther’s commentary on the Magnificat. Just as in the beginning of creation God made the world out of nothing, says Luther, so this divine way of working is reflected in God’s choice of Mary. At all times his works are such that out of that which is nothing, worthless, despised, wretched and dead he makes that which is something, precious, honorable, blessed, and living. They who preach loudly about Mary’s merits do injustice to her, spoil the Magnificat, make the mother of God a liar, and diminish the grace of God. Mary simply lets God have his way with her, and draws from this only a deep comfort, joy, and trust in God. A right Magnificat is revealed in this, that we praise God’s mercy bestowed on her of low estate. For in her God began that steep descent down the road of humiliation which led to the bitter sufferings and death of the cross, in order to reveal his glory in the concealments of a humble birth. So far Luther.

Only in this way can we rightly understand Christ’s answer to that voice from the crowd which eulogized the mother of Christ when he responded: “Yea rather, blessed are they that hear the Word of God, and keep it!”

*This article is a sequel to another article by the same author, “Ave Maria,” which appeared in the December, 1958, number of this journal.
Christ, Jesus