And I saw another strong angel coming down out of heaven, arrayed with a cloud; and the rainbow was upon his head, and his face was as the fun, and his feet as pillars of fire; and he had in his hand a little book open: and he set his right foot upon the sea, and his left upon the earth; and he cried with a great voice, as a lion roareth: and when he cried, the seven thunders uttered their voices. And when the seven thunders uttered their voices, I was about to write: and I heard a voice from heaven saying, Seal up the things which the seven thunders uttered, and write them not. And the angel that I saw standing upon the sea and upon the earth lifted up his right hand to heaven, and sware by him that liveth for ever and ever, who created the heaven and the things that are therein, and the earth and the things that are therein, and the sea and the things that are therein, that there shall be delay no longer. but in the days of the voice of the seventh angel, when he is about to sound, then is finished the mystery of God, according to the good tidings which he declared to his servants the prophets. Revelation 10:1–7

A . THE STRONG ANGEL WITH THE LITTLE BOOK DESCRIBED, verses 1 and 2

After the account of the sixth trumpet and the statement with respect to man’s impenitence we expect the ushering in of the Judgment Day. And the seventh angel does indeed sound his trumpet, but not until we come to 11:15. The intervening portion, that is. the part of the vision that is seen between the sixth and seventh trumpet, is a recess in the progress of the vision, just as was chapter 7. In this parenthesis the suffering. power. task, and final victory of the church are set forth so that believers may receive comfort. Also, the inevitable nature of the final judgment will become even clearer when it is pointed out that the wicked world not only fails to heed God’s warning voices revealed by means of the six trumpets, but in addition rejects the very clear and definite gospel-testimony of “the two witnesses” (Rev. 11:3, 7).

John sees another strong angel. He sees him in the act of coming down out of heaven. The face of this angel is like the sun, and he is arrayed in a cloud. The sun shining through that cloud produces a rainbow that encircles his head.

This angel is huge. His legs and feet are like pillars, so enormous in size that while the left foot is planted firmly on the earth the right foot rests far out on the ocean, enabling him to step across that entire ocean with one tremendous stride. The reason why he is thus pictured is to emphasize that his message concerns the whole world. In his hand the angel holds a little book (or little scroll). It has been suggested that this book is called little because it could not have been nearly as large as the one mentioned in 5:1–10. That book contained the entire all-comprehensive secret counsel of God, his plan compassing all of history and every creature. The present booklet, however. is the Gospel, and contains God’s revealed will for our lives. Surely the things we need to know in order to be saved and to live lives of service to the glory of God are far fewer than the things that are included in God’s all-comprehensive plan.

Be sure to take note of the fact that this little book lies open in the hand of the angel. As its message is urgent it must be proclaimed.

B. THE SEVEN THUNDERS SEALED UP, verses 3 and 4

The mighty angel utters a great shout like the roar of a lion. John is able, however, to distinguish the words which he hears in the seven blasts of “thunder.” But when he is about to write them down, a voice from heaven forbids him to do so. Nevertheless, commentators have come up with scores of explanations as to the exact meaning of these seven thunders. So eager is man to pry into the hidden things of God! And this in spite of: a. the express command that forbids this (Duet. 29:29; also here in Rev. 10;4); and b. the contrast drawn here between the sealed up thunders and the open booklet (Gospel). A very recent commentator suggests that the seven thunders call attention to the fact that no one knows the day of Christ’s coming (Matt. 24:36). He believes that this is true because the thunders were sealed up. Does this commentator imply, then, that one of these thunders-or perhaps all of them-stated the day and the hour, and that the voice from heaven then enjoined John from writing it down? But in that case John, at least, would have obtained this information, which is contradicted by the very text to which the commentator refers (Matt. 24:36). Far better, it would seem to me, is it to remember that these seven thunders remind one immediately of other sevens, such as lampstands, trumpets, bowls. These other sevens are forces operating in the universe (witness-bearing, persecution, outpouring of wrath). It would appear, therefore, that by means of sealing up the seven thunders the voice from heaven is simply saying: there are also other forces or principles operating in the universe, but what they are is not for you to know. Rather, embrace the contents of “the open Bible.” Embrace Christ by faith.

The angel now, with an oath sworn very solemnly, announces that once the seventh angel sounds his trumpet (cf. 11:15), complete salvation for God’s people and final wrath for the wicked will be no longer delayed. No more delay,* either of weal (cf. Rev. 6:11), or of woe (d. Luke 13:8. 9). The time to repent and embrace salvation in Christ is now! 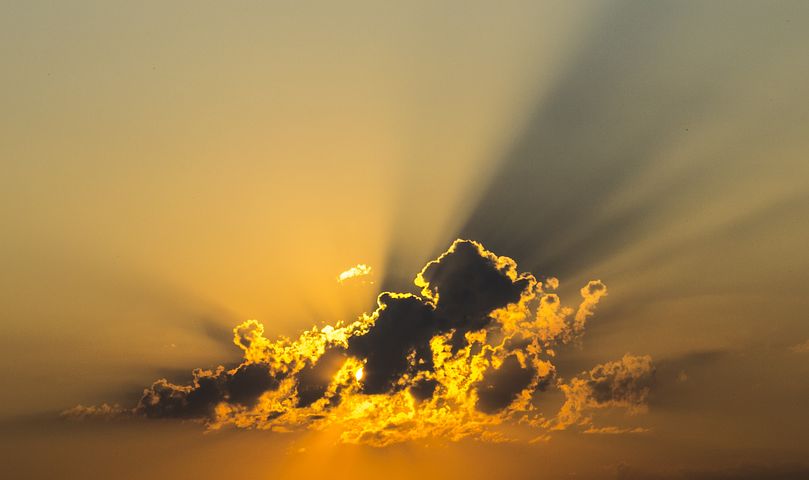 1. What is the meaning of the rainbow in verse 1?

2. Which denomination, would you say, has the right to call itself “The Church with the Open Bible”? See verses 2 and 8.

3. What does verse 4 seem to indicate as to the time when John wrote down the visions which he saw on the island of Patmos?

4. Why, do you think, was it necessary for the angel to make his announcement (verses 6 and 7) “so very solemnly?”

5. “But he lingered.” Where is that found? Call you mention other references in Scripture to sinful delay, or to the necessity of being always prepared for the return of our Lord?

6. Would you consider procrastination on the part of man to be wrong only with respect to the most vital matter of all (accepting the salvation that is offered to us) or also to such matters as being late for work, tardy in school, “never on time” for the church-service? Should anything be done about this?

7. The solemn warning implied in the angel’s announcement stresses what glorious divine attribute?

*The translation, “that there should be time no longer” (Rev. 10:6, Authorized or King James Version) I have discussed in my book, The Bible on the Life Hereafter, pp. 72–74.