Published by the Student Service Commission of the Lutheran Church, Missouri Synod

In booklet form Professor Klotz has done a nice job of discussing some of the problems relative to the age of the earth and the life forms associated with it. His approach is biblical, in the orthodox Christian sense, in that he takes the Bible to be the infallible Word of God, numbers included. The author does not capitulate to the claims of those who reckon the age of the earth as we know it today in millions and billions of years. As a matter of fact the booklet is a sort of polemic against the views generally associated with such numbers. Several months ago the Chicago Daily News carried a news item announcing the appearance of this booklet and the author’s view that the Bible does not allow for a world that is billions of years old, and that there is no scientifically valid evidence that it is so old. How rarely one finds that view expressed these days and how surprising that it comes in this instance from a man having a Ph.D. in Genetics from the University of Pittsburgh. Among most of the learned of our day the views are similar to those attributed several months ago by the Chicago Sun Times to Dr. Harold Urey, namely, that among other things the book of Genesis is not true. One gives Dr. Urey credit for seeing the logical consequences of his scientific presuppositions. 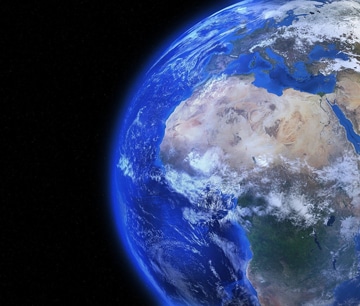 Professor Klotz briefly discusses the modern methods used to measure the age of inorganic materials (rocks, minerals) and organic materials, such as wood, charcoal, oil, and materials of organic origin such as bones and fossils. These methods all are based on the phenomena of radioactivity. A determination of the apparent age of a rock from the earth or from a meteor that has fallen to the earth can be made if it contains substances such as uranium, thorium, and their decay products. No one can help but appreciate the elegance of the methods that are used to make such a measurement. But, as Klotz points out, the methods are based on several assumptions. None of these assumptions is necessarily true, says the author. Especially open to question is the assumption that a given rock contained only the parent materials and none of the decay products at the time of its original formation. Says the author, “there is no reason why God should not have placed some of the decay products, such as radium, into the rocks at the time of Creation.” It is further assumed that a determination can be made of the amount of parent radioactive material present in the rock originally. Klotz cites various reasons why this assumption could be invalid. For example, “there is a distinct possibility that some of the parent or daughter atoms have escaped from the rocks since their formation.” Hurley is quoted from the Scientific American (181;48f, 1949) and Hahn and Walling from the Zeits. Anorg. u. Allegm. Chemie (236;18, 1938) to the effect that unaltered radioactive minerals are the exception rather than the rule.

After examining the assumptions basic to the uranium radioactive method, attention is given to the reliability or accuracy of the method. It is pointed out here, and examples are given from the scientific literature, that when various radioactive methods are applied to a single rock specimen, “differences of several hundred percent in the figures are not unusual.” Also, “while it is true that one method does not say thousands of years and the other millions of years, differences of several hundred percent in the figures are not unusual.” Some of the reasons for the inaccuracy are discussed, for example, the difficulty of determining the actual amount of non-radiogenic lead that is present in the rock specimen. And he concludes with regard to the accuracy of these methods, “with all of these difficulties and problems, there is good reason for being very cautious and critical in accepting the results of age de~ terminations by the uranium time clock.”

After devoting a few words to the fluorine method for determining the age of fossils and indicating that it has been found to be unreliable, the author goes on to examine the important and recently developed radioactive method based on the isotope carbon-14. As stated by the author, this method is “fairly reliable, where it has been possible to correlate dates with known historical dates.” However, without even going into the assumptions of the method, (and they are several) he states, “there are some difficulties with the method. It is possible, for example, for materials to have their radioactivity diminished by the entry of non-radioactive carbon which will increase the apparent age.” Fairly enough the author also mentions possible sources of error which might decrease the apparent age of the object measured.

The carbon-14 method tells us an amazing story even though the results should in many instances be accepted only tentatively. That amazing story is that the ages of most organic relics and archeological specimens fall within magnitudes that are far removed from the millions and billions of years that have for so long been associated with the development of the human and animal species. The age values obtained by this method are much more in line with the context of biblical chronology than that of those who have been claiming that millions and billions of years have expired in the course of the history of the inhabited earth. It is well known that the great scientists of the world are still claiming that millions upon millions of years can be drawn out of the reservoir of the past to accommodate the evolutionary rise of man and his civilization. At present it is hard to find measures by the carbon-14 method that go beyond 50,000 years, and most of the organic materials reported are in the order of 10 to 15,000 years. Of course, the carbon-14 method in its present form is known to have a limited accuracy so that it is possible that at some future date its range will be extended and then some older carbon-14 containing materials may be found. But despite that possibility it has been a field day for those who have been reluctant to accept the large number chronologies of the physical scientists.

The author gives two examples to show how the carbon-14 method has put restrictions on the apparent extent of historical time. “Not too long ago it was proposed that the close of the last Ice Age was about 50,000 years ago. About 10 years ago it was generally agreed that this figure would have to be reduced to 20,000 years. Now radiocarbon dating places the close of the last Ice Age at Jess than 11,500 years ago.” Again, “formerly it was thought that oil was formed, only after the original complex organic matter was covered by several thousand feet of overburden and after a lapse of several million years…. Yet Smith (Science 116;437ff, 1952) found hydrocarbons (components of oil) in sediments dated as “recent”. A composite sample of hydrocarbons taken from the Gulf of Mexico and dated by the carbon-14 method gave an age of 12,300 years, plus or minus 1,200 years, . . .”

These finding are extremely interesting to say the least. They must cause a certain amount of uneasiness in the councils of these scientists who completely disregarded the claims of the Bible in their measurements, computations, and theories. These results referred to by Dr. Klotz and his objective analyses are a real support for a more biblical view of God’s creation. Dare we believe God’s infallible book even though the intellectuals of the earth have for decades been stripping the biblical account of the creation of the earth and its creatures of every trace of respectability! Is it possible that a small cloud has appeared on the horizon and that the curtain is beginning to rise on the foibles of man and his new tower of Babel?

In conclusion Dr. Klotz states “that Scripture does not tell us exactly how old the earth is. God did not feel that it was necessary to inform us of that detail. At the same time, a careful study of the Bible indicates that figures of millions and billions of years can Dot be accepted by the Christian. The Bible indicates very clearly that we are living on a ‘young’ earth, an earth whose age is measured in thousands rather than millions or billions of years.”