When I was a teenager, I reconditioned a number of old fishing boats. They were wooden boats, made by hand before World War II. They had been discarded by previous owners who considered them too old and leaky to fix up. In some cases, the former owners were correct, and my work was in vain. The boats were simply too old, and the wood was too worn and rotten to recondition.

My friends did not understand my affection for old fishing boats. Aluminum boats had become popular, followed by fiberglass, and wooden hulls no longer were wanted. But to me, there was something about the graceful lines of the old boats, the feel of the wood, and the way they handled in the water that the newer crafts could not match. Besides, there were memories associated with the old boats that new models did not have.

I remember one boat in particular because it had such beautiful lines. Not a boat today has lines like that. It must have been a beauty when it was new. I wanted very much to see it glide across the water again. I mvested a great deal of time, energy, and plenty of pocket money trying to save it. But the boat was beyond repair. The wood was too far-gone. With a heavy heart I towed the old boat to a deep spot in the lake and with a private farewell ceremony I let it sink to the bottom.

Old church buildings are often like old fishingboats. They have splendid architecture, beautiful stained glass wmdows, and most of all, precious memories of all the saints who found the Lord and worshiped there. But as with old fishing boats it takes an enormous amount of money and effort to maintain aging church buildings. There comes a point when you may have to give them up.

In cities like New York, Philadelphia, Chicago, New Orleans, and Detroit, dozens of in-town churches have been closed over the past thirty years. Congregations moved to the suburbs, new highways divided neighborhoods and isolated church buildings, and buildings themselves became obsolete, no longer serving the needs of church members.

Some of the grandest old buildings in American cities belong to the Roman Catholic Church. But Catholics, like Protestants, have left the city for the suburbs. Their departure now threatens the future of magnificent, 19th century sanctuaries. On a recent visit to Chicago I visited a parish church with its adjoining Catholic school buildings and residences for priests and nuns. All of them were shut down, abandoned, and a prey to vandals.

“It’s sad,” commented an elderly nun who had spent most of her life teaching at the Catholic school, “but buildings are merely material things that were a blessing to us for a long time. But they are inanimate. We can’t continue maintaining buildings that no longer are of use to us. Things have changed.”

Like my old boat, the building had to go down. 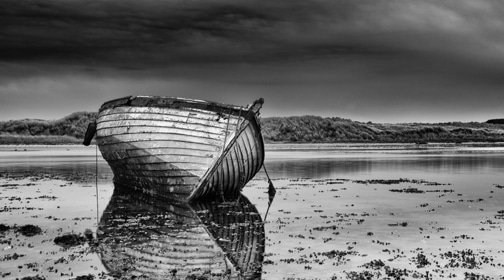 Years ago, the Reformed Church in America had more than a dozen congregations in the city of Philadelphia. On Broad Street, near where my wife and I lived for some 20 years, a gem of a building stands. whose cornerstone still identifies it as having been erected early in the th century by an RCA congregation. But around 1984, the last RCA congregation within the Philadelphia city limits closed down. The building was sold to a Hispanic congregation that had outgrown its facilities.

I preached for the old Reformed congregation a few weeks before it disbanded, and only a few dozen people made up the Sunday morning audIence. But on the first Sunday that the incoming Hispanic congregation occupied the building, the place was filled! New life came to the old building by letting it change hands to a different group that represented the neighborhood. By making the t~ansfer while the building was stIll useful, it became a blessing to another generation.

Taking the Pain Out of Change

Experience tells us that any alteration to a cherished old building can be divisive to a congregation, and a proposal to transfer it to an altogether new owner inevitably faces stiff opposition. We love our old buildings! We cling to the hallowed memories they bring to mind. The wise words of the old nun (“buildings are merely material things that were a blessing to us, but they are inanimate”) are hard to swallow when it is our building that is under consideration.

Some years ago, when I was studying in Fort Worth, Texas, I was approached by a group representing a denomination that I had never heard of before, the Advent Christian Church. They were without a pastor and wanted to know if I would be willing (for $50 a week) to preach for them twice on Sunday and lead the midweek prayer and worship service on Wednesday evening.

The members showed me their church bulletin that listed Sunday School classes at all grade levels, an adult class and several other organizations. The weekly bulletin was printed on fine, attractive paper and gave every appearance of an active church. Then I inquired about the membership. To my amazement they admitted that there were only six remaining members and all were over 60 years of age. There had not been a child in church for years!

Yet, the list of classes and midweek activities appeared in the church bulletin just as in the “glory days” of the past. Those six dear people kept going by denying reality.

I accepted their offer on two conditions: first, that they allow me to put up a sign reading, “The Christian Reformed Church of Dallas/Fort Worth meets here”; and second, that I be allowed to preach Reformed doctrine and use the Heidelberg Catechism. They had never heard of the CRC or the Heidelberg Catechism, but they accepted my conditions anyway.

Besides getting a CRC started, my main accomplishment was to convince that handful of precious old people that the time had come to sell their well-kept building and let a Hispanic congregation take it over. They had to see that they would not be letting the Lord down by making the transfer, but instead they were doing something that pleased the Lord. They were allowing the building that had been a blessing to them to become a blessing to a new and younger group of believers that needed such a facility. When they made the dedsion they did it with joy and gratitude.

As a boy, I made mistakes when I chose to put time and effort into old fishing boats that actually were beyond repair. I became emotionally attached to the graceful old boats, and it impaired my judgment. I learned the hard way that while some boats could be restored to usefulness, others could not. I had to learn how to assess a boat’s condition and its potential for further usefulness. If a boat has become old and no longer fits the owner’s needs, or he simply wants a new and bigger one, it is reasonable that the old boat be given or sold to another fisher who is looking for such a boat. The new owner may make some repairs, customize the boat a bit, and then use it for many years to catch fish.

This applies to church buildings, especially in large cities where needs have changed and church members have moved away. Most church buildings eventually outlive their usefulness to the people who own them. However, buildings can continue to be useful to God’s people if they are transferred on time to other branches of God’s family, and transferred in a manner that reflects a proper sense of stewardship and mission.

For the gospel to be spread in any community, there have to be churches whose worship and ministry match the people and needs of the community. Churches must speak the language of the people, reflect their culture, sing as they sing, and talk as they talk. Their needs must be understood and addressed by Christian people like themselves. When an aging but still useful building can be transferred to another group of Christians that can minister more effectively in the community, God be praised! That, too, is an act of evangelism.

This article is reprinted from Missionary Monthly, June/July 2000.

Dr. Roger S. Greenway, Missionary Monthly Associate Editor. has been professor of World Missiology at Calvin Theological Seminary, Grand Rapids, MI, since 1989. Earlier, he and his wife, Edna, served as Christian Reformed missionaries to Sri Lanka and Mexico. Dr. Greenway has served as pastor and mission administrator and has written numerous mission books and articles.