How many times, while filling out an income tax return or filing some sort of application, have you written in under “Occupation” the word “housewife” or “housewife and mother” with a certain amount of reluctance and even perhaps a little shame? You can claim no real occupation; you’re “just a housewife.” Have you perhaps thought back with some nostalgia to the time when you were able to write proudly: “school teacher;” “nurse,” “private stenographer,” “medical technician,” or the like? But now you have become like millions of other nameless women who have no title, no pay, no boss—who are “just” housewives and mothers.

But are you like those millions? In many respects, of course, you are. Outwardly, certainly. You have the same three meals a day to prepare as they do. You have the same dirty sheets and jeans to wash as they do. Dust accumulates on your table tops and floors as well as on theirs. Nor are you exempt from diapers and formulas, P. T. A.’s and graduations, or discipline problems. But what a basic, fundamental difference there really is! For you are aware, as those millions of the world are not, of the high calling to which you have been called by God, who makes his sovereign demands upon ministers and missionaries, doctors and teachers,. clerks and mechanics—and yes, also upon housewives and mothers.

In Subjection to God

There is another slightly different comparison which we may make. All gold and silver, trees and rivers, “every beast of the forest” and “the cattle upon a thousand hills”—in short, the world and the fulness thereof—belong to God (Psalm 50). Out of his abundance he graciously “lends” a certain portion of his possessions to us. And we are responsible to him for what we do with them all of them, and not just the 10% or 15% we give back to his Kingdom. In a similar way, he “lends” us the lives he has created—“our” children. And since they are basically his, not ours, we are, again, responsible to him for the way in which we take care of them. 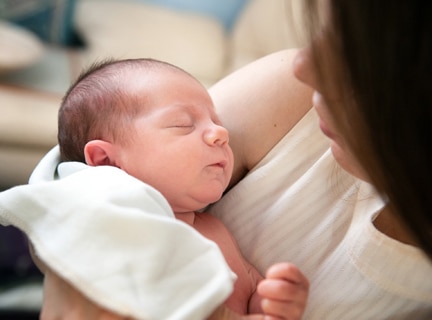 In Subjection to Husbands

But then for the mothers we must go one step further. When a man and woman marry, they become one flesh, and yet in that union there is not absolute equality. Ephesians 5:22, 23 tells us, “Wives, be in subjection unto your own husbands, as unto the Lord. For the husband is the head of the wife, as Christ also is head of the church.” This ancient Biblical truth is now being revived in the currently popular motto: “Put father back at the head of the house.” This does not mean that we must put back fathers who are selfish, mean despots, but ones who “love [their] wives, even as Christ also loved the church, and gave himself up for it” (Ephesians 5:25) and who “provoke not [their] children to wrath: but nature them in the chastening and admonition of the Lord” (6:4). To such fathers must the wives be in subjection, as well as the children.

Yet even with these two basic restrictions placed upon mothers their subjection to God and to their husbands—there is for them still much authority and consequently much responsibility. For although children belong first of all to God, it pleases him to rule them through their parents, by proxy, so to speak. And in like manner, although the husband is the head of the wife, by virtue of the fact that he is customarily absent from the home more than she is, it pleases him to rule the children through the mother, again by proxy. Thus for all practical purposes it is the mother who usually has the greatest contact with the children, and therefore the greatest influence upon their lives.

Perhaps the worst sickness of our time is the sickness of the family. Our medical scientists and doctors are valiantly destroying bodily sicknesses one by one. Yet this malignant disease of the family, which they cannot touch with their most recent surgical and radiation techniques, is eating away at the social structure of our nation. One symptom of this sickness is juvenile delinquency, which is increasing at an alarming rate, both as to the number of delinquents and as to the magnitude of their crimes. And if we do not want to have a policeman for every teenager, we must make corrections at the source of the trouble, the home.

Thus what a challenge there is to parents, and in particular to mothers, who are with their children so much of the time! God commands—and society demands—that mothers labor diligently and conscientiously to build up their homes and their children. It is not enough to set before the children the proper quantity of vitamins and proteins each day, and to see to it that they have enough baths and clean clothes. Nor is it enough to supervise their school assignments and encourage them in their intellectual development. It is not sufficient to help them to become well-adjusted citizens of their community and their nation. It is not even adequate to send them to a Christian school and to insist on their regular attendance at Sunday school, church, and catechism. These are all important duties which no mother should neglect. But Christian motherhood goes beyond these necessary activities.

A Mirror of God

The Christian mother should strive to mirror as much as possible certain divine attributes. A child’s first contact with the world is his mother. Before he is ever able to have any realization that there is a God, he does know that he has a mother who is always there, watching over and taking care of him. As the prominent British Christian psychiatrist, Ernest White, has pointed out, our concept of God is often formed in early childhood by associating God with a parent or grandparent. An excessively severe and stern father, for example, can condition a child into conceiving of God as a merciless judge. A withdrawn, silent grandmother can leave with a child the impression that God is unapproachable. In like manner, a good Christian mother can, just by her attitudes and actions, do much to give her child a correct understanding of what God is like, and how he deals with us.

For example, a mother’s love and care of her child should be a reflection—even though it will be an imperfect one—of the Father’s love and care of his children in Christ. With how much solicitude and tenderness does not our heavenly Father take care of all our needs, often before we ourselves even know what our needs are. God’s mercy and longsuffering also should be reflected in the mother’s attitude toward her child. How true the words we often sing: “No mother, half so mild, bears and forbears as Thou hast done, with me, Thy sinful child.” Of course this does not mean that she should allow her child to throw a bottle of ink at the wall whenever he pleases, but it does mean that she should exercise patience, love, and forgiveness as she attempts to correct and guide him. When a mother must judge and punish, she should do it as God always does, in wisdom, love, and justice, and not as a result of a moment of anger or impatience. A child should eventually learn to depend on the veracity of God. But before that time, he should have learned that whatever mother says is always true. Then it will be an easy step for him to say, “I know it’s true because God says so.” God’s trustworthiness, not only as far as his words are concerned, but also as far as his actions are concerned, should be mirrored in the mother. A child who is confident that his mother “knows best” for his welfare will more easily learn to confess “that to them that love God all things work together for good” (Romans 8:28). In such a way, a mother can help to form a Scriptural concept of God in the mind of her child.

And then, at the same time, a mother should give explicit instruction which corresponds to that which has been implicitly conveyed by her actions and attitudes. As important as the Sunday school, Christian school, and catechetical instruction are, they may never be a substitute for training in the home. And how much more effective such training will be in a home atmosphere as we have just described! How much more quickly the child will be able to grasp the truths about God’s love, longsuffering, justice, veracity, and trustworthiness when he has already experienced such qualities on the human plane!

But if a mother wishes the faith to be important to her child, it must be evident to the child that the faith is important to his mother. If a mother wants her child to be faithful and earnest in Bible reading, prayer, and church attendance, then the child must be able to see that his mother is faithful and earnest in them herself. A child is quick to detect hypocrisy, and nothing is more devastating to the positive instruction of the child than the negative behavior of the mother.

Thus, deeply grounded in the faith herself, the mother will better be able to impart to her child not only that which he needs for his physical, intellectual, and emotional development, but also that which is essential for his spiritual growth. Aware of her responsibility first of all to God, and receiving from him divine wisdom and grace to do that which he commands; and in subjection to her husband, from whom she will receive human encouragement and wisdom, the Christian mother will strive to fulfill her obligations toward that child which has been entrusted to her care.