Keep me from falsehood, let Thy law With me in grace abide; The way of faithfulness I choose, Thy precepts are my guide.

I cleave unto Thy truth, O Lord; From shame deliver me; In glad obedience I will live Through strength bestowed by Thee.1

The law of God addresses the world and the life of every individual directly or indirectly. Protestant theologians have written much about the various applications or uses of the law in the life of society at large and in the individual lives of both the Christian and the unbeliever. Classic Protestant theology posits a threefold use of the law: the usus primus (“first use”), or civil use of the law in the life and affairs of state and society; the usus secundus (“second use”), or evangelical use of the law as a teacher of sin in the experience or process of conversion unto God; and the usus tertius (“third use”), or didactic use of the law as a rule of thankful obedience on the part of the Christian.2 It is this last or third use of the law that inspired the prayer of the psalmist cited above, for he knows that only God’s law can direct him as he endeavors to live “in glad obedience” as a child of God.

This article briefly summarizes the first two uses of the law in order to examine its third use next month in the proper context of sanctification, which necessarily involves grateful obedience to God for His full-orbed salvation in Jesus Christ. The believer who is justified by faith alone (sola fide), and adheres to the principle of “Scripture alone” (sola scriptura), will thankfully and wholeheartedly trust and obey the Lord.

In a concluding article, several significant conclusions about the believer’s relationship to the law will be drawn. 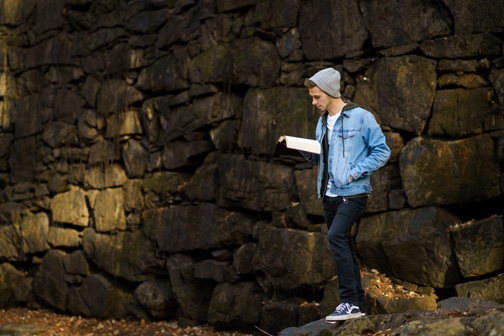 THE CIVIL USE OF THE LAW

The first use of the law is its function in public life as a guide to the civil magistrate in the prosecution of his task as the minister of God in things pertaining to the state. The magistrate is required to reward the good and punish the evil (Rom. 12:34). Nothing could be more essential to this work than a reliable standard of right and wrong, good and evil. No better standard can be found than the law of God.

Here the Protestant Reformers were in complete accord. Concerning the restraint of sin, Martin Luther writes in his Lectures on Galatians (3:19), “The first understanding and use of the Law is to restrain the wicked…This civic restraint is extremely necessary and was instituted by God, both for the sake of public peace and for the sake of preserving everything, but especially to prevent the course of the Gospel from being hindered by the tumults and seditions of wild men.”3 John Calvin concurs:

The…function of the law is this: at least by fear of punishment to restrain certain men who are untouched by any care for what is just and right unless compelled by hearing the dire threats in the law. But they are restrained not because their inner mind is stirred or affected, but because, being bridled, so to speak, they keep their hands from outward activity, and hold inside the depravity that otherwise they would wantonly have indulged.4

The civil use of the law is rooted thoroughly in the Scriptures (most specifically in Romans 13:1–7) and in a realistic doctrine of fallen human nature. The law teaches us that the powers that be are ordained of God in order to administer justice—justice which necessarily includes being a terror to the workers of iniquity. The powers that be bear the sword; they possess a divinely conferred right of punishment, even of ultimate, capital punishment (w. 3–4).

This first use of the law, however, serves not only to prevent society from lapsing into chaos; it also serves to promote righteousness “I exhort therefore, that, first of all, supplications, prayers, intercessions, and giving of thanks, be made for all men, for kings and for all that are in authority; that we may lead a quiet and peaceable life in all godliness and honesty” (1 Tim. 2:1–2). The “higher powers” must not only strive to intimidate evil, but also to provide a peaceable context in which the gospel, godliness and honesty may prosper. This duty compels the state, the Reformers believed, to preserve certain rights, such as freedom of worship, freedom to preach and freedom to observe the Lord’s Day.

The implications of the first use of the law for the Christian are inescapable: He must respect and obey the state so long as the state does not command what God forbids or forbid what God commands. In all other cases, civil disobedience is unlawful. To resist authority is to resist the ordinance of God, “and they that resist shall receive to themselves damnation” (Rom. 13:2). This is critical to affirm in our day when even Christians are prone to be swept along with a worldly spirit of rebellion and contempt for authority. We need to hear and heed what Calvin writes:

The first duty of subjects toward their magistrates is to think most honorably of their office, which they recognize as a jurisdiction bestowed by God, and on that account to esteem and reverence them as ministers and representatives of God…. [Even] in a very wicked man utterly unworthy of all honor, provided he has the public power in his hands, that noble and divine power resides which the Lord has by his Word given to the ministers of his justice and judgment.5

Of course, this does not imply that the believer forfeits his right to criticize or even condemn legislation which strays from the principles of Scripture. It does mean that a significant part of our “adorning the doctrine of God” involves our willing subjection to lawful authority in every sphere of life-be it in the home, school, church or state.

THE EVANGELICAL USE OF THE LAW 6

Wielded by the Spirit of God, the moral law secondly serves a critical function in the experience of conversion. It disciplines, educates, convicts, curses. The law not only exposes our sinfulness; it also condemns us, pronounces a curse upon us, declares us liable to the wrath of God and the torments of hell. “Cursed is every one that continueth not in all things which are written in the book of the law to do them” (Gal. 3:10). The law is a hard taskmaster; it knows no mercy. It terrifies us, strips us of all our righteousness, and drives us to the end of the law, Christ Jesus, who is our only acceptable righteousness with God. “Wherefore the law was our schoolmaster to bring us unto Christ, that we might be justified by faith” (Gal. 3:24). Not that the law itself can lead us to a saving knowledge of God in Christ. Rather, the Holy Spirit uses the law as a mirror to show us our impotence and our guilt, to shut us up to hope in mercy alone, and to induce repentance, creating and sustaining the sense of spiritual need out of which faith in Christ is born.

Here, too, Luther and Calvin see eye-to-eye7 Typical of Luther’s writings are his comments on Galatians 2:17: The proper use and aim of the Law is to make guilty those who are smug and at peace, so that they may see that they are in danger of sin, wrath, and death, so that they may be terrified and despairing, blanching and quaking at the rustling of a leaf (Lev. 26:36)….If the Law is a ministry of sin, it follows that it is also a ministry of wrath and death. For just as the Law reveals sin, so it strikes the wrath of God into a man and threatens him with death8 Calvin is no less intense: [The law] warns, informs, convicts and lastly condemns every man of his own righteousness…After he is compelled to weigh his life in the scales of the law, laying aside all that presumption of fictitious righteousness, he discovers that he is a long way from holiness, and is in fact teeming with a multitude of vices, with which he previously thought himself undefiled…The law is like a mirror. In it we contemplate our weakness, then the iniquity arising from this, and finally the curse coming from both—just as a mirror shows us the spots on our face.9

This convicting use of the law is also critical for the believer’s sanctification, for it serves to prevent the resurrection of self-righteousness that ungodly self-righteousness which is always prone to reassert itself even in the holiest of saints. The believer continues to live under the law as a lifelong penitent.

This chastening work of the law does not imply that the believer’s justification is ever diminished or annulled. From the moment of regeneration, his state before God is fixed and irrevocable. He is a new creation in Christ Jesus (2 Cor. 5:17). He can never revert to a state of condemnation or lose his sonship Nevertheless, the law exposes the ongoing poverty of his sanctification on a daily basis. He learns that there is a war within him, so that when he would do good, evil is present with him (Rom. 7:21). He must repeatedly condemn himself, deplore his wretchedness and cry daily for fresh applications of the blood of Jesus Christ that cleanses from all sin (Rom. 7:24; I John 1:7, 9).

2. Many Reformed theologians. following Calvin. invert the first and second uses of the law.

6. In selecting a term for this use of the law, we are aware of the many possibilities in the literature, but have chosen the term which best expresses the Reformed view of the relationship of the law and the gospel, that they are complementary and not antithetical. Here we are dealing with that work of the law which prepares the heart of the sinner to receive Christ freely offered in the gospel to sinners, as the only Savior from the law’s condemnation. curse and punishment—i.e, with evangelical rather than legal convictions. The Puritans excelled in describing this distinction, stressing that legal conviction deals only with the consequences of sin whereas evangelical conviction grapples with sin itself and the need to be delivered from it by Christ. E.g, Stephen Charnock wrote, “A legally-convinced person would only be freed from the pain [of sin], an evangelically-convinced person from the sin [itself]” (I.D.E. Thomas. Puritan Quotations [Chicago Moody. 1975]. 167).

Dr. Joel R. Beeke is pastor of the Netherlands Reformed denomination and is the editor of its periodical, The Banner of Sovereign Grace Truth.