Some years ago one of the elderly members of our congregation shared with me the fact that he and his wife had been married for over 50 years and had never had a single argument. Although I am rather gullible and really quite naïve, I could still hardly believe what he had said! So, I asked him to please share with me the secret of their success. With a twinkle in his eye he said:

Well, Pastor, it actually began on our honeymoon when we were taking one of those mule rides down into the Grand Canyon. No sooner had the trail ride started than my wife’s mule stopped dead in its tracks and wouldn’t move! I heard my bride say quietly, “That’s one.” She then kicked her mule until it began moving, only to have it stop again several yards later. I heard her say softly, “That’s two.” She again kicked the mule and began heading down the trail. A third time the mule stopped and absolutely refused to move! To my utter shock and dismay, I watched as my wife pulled a pistol from her pocketbook and shot the mule dead, right on the spot! I climbed off my mule, ran over to my wife and cried ‘Honey, what in the world do you think you’re doing?? Are you crazy!??’ She looked me straight in the eye and replied softly, “That’s one.” And Pastor, I’m telling you we have not had a single argument ever since!

Whether this story is true or not, I strongly believe that when it comes to having a happy, healthy, mutually satisfying, God-glorifying marriage, God’s Word has a far, far better way! That is why we need to look at God’s Word concerning needs which our wives need met at home. These needs can be summarized very simply as follows: by the grace and mercy of God, each and every day, husbands need to give their wives healthy, God-honoring doses of TLC: Time; Love; and Communication. 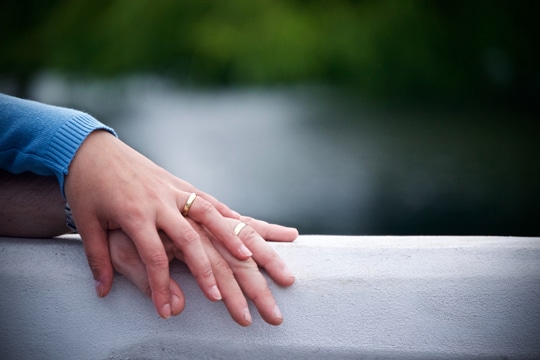 This month, let us consider the first need our wives have: our time. Time which results in God-honoring, Christ-centered companionship and compatibility.

In Genesis 2:18–25 we read, The Lord God said, “It is not good for the man to be alone. I will make a helper suitable for him.” Now the Lord God had formed out of the ground all the beasts of the field and all the birds of the air. He brought them to the man to see what he would name them; and

whatever man called each living creature, that was its name. So the man gave names to all the livestock, the birds of the air and all the beasts of the field. But for Adam no suitable helper was found. So the Lord God caused the man to fall into a deep sleep; and while he was sleeping He took one of the man’s ribs and closed up the place with flesh. Then the Lord God made woman from the rib He had taken out of the man, and He brought her to the man.

The man said, “This is now bone of my bones and flesh of my flesh; she shall be called ‘woman,’ for she was taken out of man.” For this reason a man will leave his father and mother and be united to his wife, and they will become one flesh. The man and his wife were both naked, and they felt no shame.

Now notice that we read here that God had all the animals of His entire creation parade past Adam. I wouldn’t be at all surprised if, as he beheld all of the animals, Adam was thinking to himself something along these lines: “No, no, the giraffes and the orangutans and the lions and tigers and bears just don’t meet my needs. I need a companion!” And so the Bible tells us: “Then the Lord God made a woman from the rib He had taken out of the man and He brought her to the man.”

Commenting on this portion of the text, biblical commentator Matthew Henry insightfully writes:

The woman was made from the rib God had taken out of the man; not made out of his head to rule over him nor out of his feet to be trampled on by him, but out of his side to be equal with him, under his arm to be protected, and near his heart to be beloved.

Think of your wife as I think of mine: the perfect, God- ordained, God-created, God-designed companion, or help-meet, for you.

And notice! The above passage also teaches us: “For this reason a man will leave (someone has well defined ‘leaving’ as breaking the apron strings without breaking the heart strings) his father and mother and be united to (Hebrew: dabag; meaning to ‘cling to’, to ‘cleave to’) his wife and they will become one flesh.”

The point here is that we are not supposed to “cleave to” our golf clubs or to our fishing poles nor to anyone or anything else other than our wives! In order for husbands to be cleaving to their wives, they have got to be spending significant amounts of TIME with them In fact, in Song of Songs 2:15, the Lover exhorts his Beloved by saying, “Catch for us the foxes, the little foxes that ruin the vineyards, our vineyards that are in bloom.”

What are some of the “little foxes’ that are ruining your vineyard or stealing, sabotaging the time which you should be spending with your wife? Too much time at the office, perhaps, or too much time sitting in front of the television set? All sorts of sports, hobbies, personal interests—which may be perfectly fine in and of themselves when kept in a proper perspective and assigned their proper place but things which can so easily become “idols” in our lives. Things which cause us to compromise the faithful stewardship of time which we should be committing to our wives.

In Ephesians 5:15-16, the Holy Spirit inspired the Apostle Paul to write this: “Be very careful then, how you live—not as unwise but as wise, making the most of every opportunity, because the days are evil.” The phrase “making the most of every opportunity” literally reads as “redeeming the time”. Think about that! This clearly implies that Satan has seduced us into allowing extremely valuable and precious time – moments, hours and even entire days – to be taken away and stolen from us. The result is that we need to “buy back” that time and consecrate it for holy, God-honoring, kingdom building, marriage and family strengthening purposes!

Allow me to illustrate. Several years ago there was a young couple in our congregation whom the Lord had recently blessed with their second child. The young husband and father had a very lucrative job on Wall Street in New York City where he was working somewhere between 100–110 hours per week. Shortly after their second child arrived, he sat down with his boss and said something to this effect: “Sir, my wife and I have just had another baby. As a Christian husband and father who is seeking to live according to God’s Word, the Bible, I will gladly continue to be a faithful hardworking employee for you, but I simply cannot and should not continue to spend the kind of time which I have been spending here in the office. I need to be spending more time at home with my family.”

Well, that young Christian father walked out that door that day and he never returned! In fact, he moved his family to Florida and began working for a company which paid him approximately one fourth of what he was making on Wall Street! But do you know what? He had his priorities right! He kept his family intact! He was prayerfully and sincerely seeking to honor the Lord by the way in which he cared for and tended to the pre cious family which the Lord our God had so graciously entrusted to him.

I respectfully, humbly, and sincerely give you this challenge today: Look at your own day-planners and appointment calendars. Consider your schedule. Look at your daily and weekly routines. Then, let each and every one of us honestly ask ourselves and sincerely seek to answer these kinds of questions: ‘How much time do I spend interacting with my wife? When was the last time I did something for her? Or with her? When was the last time we enjoyed a date together? Am I regularly and eagerly engaged in trying to lighten her load?

These are extremely critical questions ! Why? Because TIME – resulting in God-honoring, Christ-centered companionship and compatibility – is one of the Needs Which Our Wives Need Met At Home.