But understand this, that in the last days there will come times of difficulty. For people will be lovers of self, lovers of money, proud, arrogant, abusive, disobedient to their parents, ungrateful, unholy, heartless, unappeasable, slanderous, without self-control, brutal, not loving good, treacherous, reckless, swollen with conceit, lovers of pleasure rather than lovers of God, having the appearance of godliness, but denying its power. Avoid such people.

A Pastoral Word from Paul to Timothy

Paul’s inspired words to Timothy in the above text are certainly applicable to our time, especially considering the declining moral condition of the United States of America (and beyond) that is being witnessed day by day. During this period of time, many members of the body of Christ are experiencing a “time of difficulty” (this mostly by way of manifestations of varying levels of depression, anxiety, and/or anger). Such times have been and will continue to be experienced by all Christians in varying measures until Jesus Christ returns on the clouds of glory at the end of time. 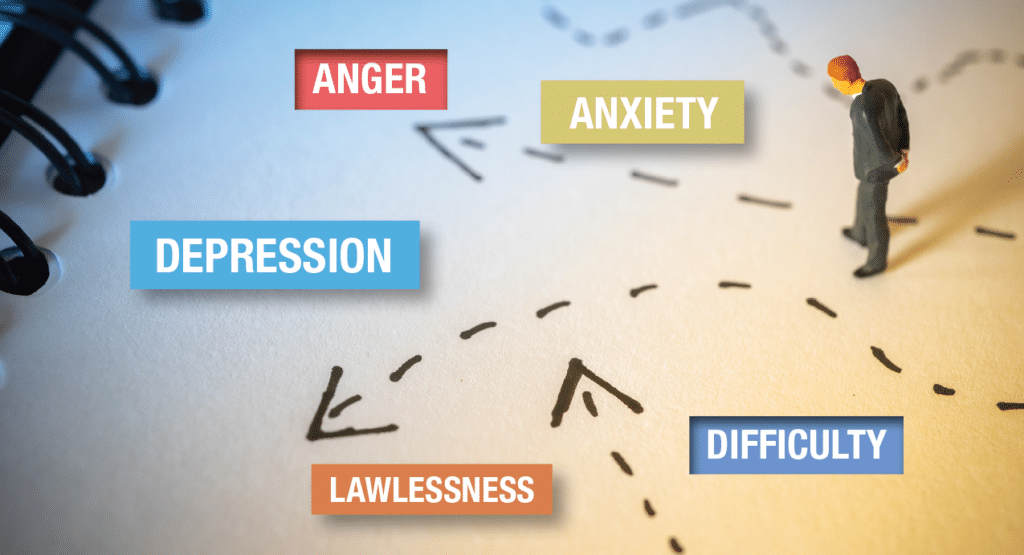 What Lies at the Root of Times of Difficulty?

At the root of the times of difficulty spoken about in our passage is sin, and—more particularly—the motivation behind sin, which is self-love. The root of all sin is self-love, which is the reason it is placed at the beginning of the list of the “parade of sins” featured in our text (see v. 2). All people love themselves (Mark 12:31), but the contorted sinful type of self-love spoken about here is a love which aims to gratify one’s own sinful nature, versus pleasing God by responding in faith to the gospel and possessing a heartfelt desire to live in obedience to God’s commands. Whenever sin abounds, self-love trumps a love for Jesus Christ, who said, “If you love me you will obey my commandments.” Whenever sin abounds in the family, the visible church, or in civil government, stormy times of difficulty arise, and things become dangerous. The reason matters are dangerous at such times is because it becomes increasingly difficult for Christians to keep their integrity amid general corruption. Instead of standing up and fighting the good fight of faith in seasons of difficulty wherein lawlessness is abounding, many cave in and do untold damage to their own souls and the souls of others. Damage is always done to the soul (and often to the body) when one chooses to disregard or disobey God’s moral law—the Ten Commandments. May God give us all the grace which is necessary to stay the course in this season of difficulty within America. All hands need to be on deck ministering to the needs within the congregations of the saints and sharing the gospel with the lost. Heeding the exhortation of Hebrews 3:13 is of utmost importance for the spiritual well-being of the members of each true congregation of Christ: “But encourage one another day after day, as long as it is still called ‘Today,’ lest any one of you be hardened by the deceitfulness of sin” (New American Standard Bible). Heeding the exhortation given in Hebrews 10:24–25 (New King James Version) is of equal importance: “And let us consider one another in order to stir up love and good works, not forsaking the assembling of ourselves together, as is the manner of some, but exhorting one another, and so much the more as you see the Day approaching.”

Reading, Studying, and Meditating upon God’s Word and Prayer

What is the best way to navigate the difficult times when we encounter them? Of course, it goes without saying that our navigations must always be rooted in reading, studying, and meditating upon God’s Word and engaging in Spirit-assisted prayer. Concerning the latter, the Holy Spirit not only helps us pray when we look to God in difficult times; he also intercedes for us. Romans 8:26 (English Standard Version) says, “The Spirit helps us in our weakness. For we do not know what to pray for as we ought, but the Spirit himself intercedes for us with groanings too deep for words.” If times of difficulty don’t do anything else in the life of a child of God, they at the least show us how weak and dependent upon the heavenly Father we really are. Thankfully our heavenly Father has provided for us a Helper for such times, one who comes alongside our spirits and helps us look heavenward and cry, “Abba, Father.” And, if we should ever become so depressed, overwhelmed, or confused that we can’t even look to the Father or form one intelligible sentence of a prayer, may our souls be comforted as we remember that the Holy Spirit is interceding for us at a level deeper than we could ever express with words.

Having touched upon the essentiality of spending time in the Word and prayer, let’s look at a couple more important things that will help us navigate the times of difficulty that God has ordained for us. They are contentment and a wholesome longing for deliverance.

Puritan preacher Jeremiah Burroughs once said, “Christian contentment is that sweet, inward, quiet, gracious frame of spirit, which freely submits to and delights in God’s wise and fatherly disposal in every condition” (The Rare Jewel of Christian Contentment).

Being content in the midst of times of difficulty is not something that comes naturally to the child of God. It is something that has to be learned. Paul wrote in Philippians 4:11, “I have learned in whatever situation I am to be content.” Through all of Paul’s sufferings, and there were many of them (see 2 Cor. 11:24–27), he had learned to be content. What was at the root of his contentment? What did he learn with increasing clarity through each God-ordained trial or season of difficulty? He learned that he could trust our heavenly Father to provide for him everything he needed. And how did our Father particularly provide for Paul’s needs? He provided through Jesus Christ. That is why he could confidently say in Philippians 4:19, “My God will supply all your need according to his riches in glory in Christ Jesus.” In all his sufferings, as well as when things were good, Paul had learned that God would supply all his needs through Jesus. He also understood that God was personally and intimately right there with him through the ministry of the Holy Spirit. Such was at the root of Paul’s contentment encouraging him to freely submit to and delight in “God’s wise and fatherly disposal in every condition.” Paul, furthermore, believed that “for those who love God all things work together for good” (Rom. 8:28), and so must we.

A Wholesome Longing for Deliverance

The other component necessary for navigating through times of difficulty is a wholesome longing for deliverance. It is not wrong to desire to be delivered while in the midst of especially deep times of difficulty. Jesus, being fully human, expressed this desire while in the Garden of Gethsemane when he prayed, “Father, if you are willing, remove this cup [of suffering] from me” (Luke 22:42a). Jesus really wanted to be delivered from the anguish he was experiencing in the garden, and the agony he would experience on his way to and upon the cross. Jesus was realistic about his suffering, and it made perfect rational sense for him to appeal to his (and our) heavenly Father for deliverance. Yet, he rightly concluded and said what he did in the second half of verse 42 in the midst of spiritual and mental anguish so deep that it caused to him to sweat blood—hematidrosis: “Nevertheless, not my will, but yours, be done.” God’s will was that he should go to the cross and die for God’s chosen people, and praise God that he did!

At the heart of Paul’s wrestling with the will of God as to whether departing or continuing his ministry on earth would be best for him, he says, “If I am to live in the flesh, that means fruitful labor for me. Yet which I shall choose I cannot tell. I am hard pressed between the two. My desire is to depart and be with Christ, for that is far better” (Phil. 1:22–23). Paul clearly states that it would be far better to depart and be with Christ. Yet, he goes on to say in verses 24–26, “But to remain in the flesh is more necessary on your account. Convinced of this, I know that I will remain and continue with you all, for your progress and joy in the faith, so that in me you may have ample cause to glory in Christ Jesus, because of my coming to you again.” Paul’s desire was to depart, but he remained for the sake of the church—and praise God he did!

It was not wrong or sinful for either Jesus or Paul to desire to be delivered from their earthly pilgrimages; and it is not wrong or sinful for suffering Christians to desire to be at home with the Lord or freed from their trial. Yet, extremes such as giving up or checking out of life, not being useful for the kingdom of God or taking one’s own life, must be avoided. As long the children of God have breath, their work on this earth is not finished. There are lost family members, friends, and acquaintances that need to be evangelized; and there are fellow Christians that need to be encouraged in their faith.

I will close by encouraging all of us to take advantage of the opportunities that God provides for us in difficult times. I was recently struck by a portion of a speech by Winston Churchill, who was the prime minister of the United Kingdom from 1940 to 1945. He was speaking to a group of students who had completed their education during World War II, a very dark time for his country. He said, “Do not let us speak of darker days; let us speak rather of sterner days. These are not dark days: these are great days—the greatest days our country has ever lived; and we must all thank God that we have been allowed, each of us according to our stations, to play a part in making these days memorable in the history of our race.”

May God give each of us the grace, wisdom, knowledge, and strength we need in each of our stations of life, to play a part in making these days memorable in the history of the human race as we stand firm in our faith and share the gospel with the countless thousands of Americans in chains of bondage to God’s archenemy and ours. As the winds of change reach hurricane speeds and the moral fiber of our country continues to unravel, let us take courage that our sovereign God is in control and is unchanging. God and his Word are the fixed constant in our lives, and he will work all things together for his glory and the good of those who love him.

Fellow soldiers of the cross, let us press on toward the goal for the prize of the upward call of God in Christ Jesus (Phil. 3:14).

This article has been formatted as a booklet which may be obtained by contacting the Institute for Reformed Biblical Counseling at: irbcdirectorsasst@gmail.com.

Dr. Jeff Doll is a member of the Cornerstone United Reformed Church of Hudsonville, MI, the congregation which oversees the ministry of the Institute for Reformed Biblical Counseling of which he is the director.