In our discussions of music in the church, we have seen the fundamental importance of congregational singing mirrored in its divine provision and divine preservation. Today we focus upon a segment of the congregation which assists the congregation in song — the choir.

It is important at the outset to emphasize that, although choirs play an important role in church worship, they do not replace the singing congregation in any way. The choir as one part of the congregation inspires the other part of the congregation to greater zeal and skill in singing before God. The music of the choir is preface to, accompaniment of, or instruction in congregational singing. It is a helper, a “handmaid” in worship (to use an idea generated by the Rev. H.J. Kuiper, former editor of the CRC Banner).

But a “handmaid’s” worth is not to be underestimated. Even though choirs are not a necessity in worship, they are legitimate and can be an asset. In his lecture to the first annual Calvin College Conference on Church Music, the late Rev. H. J. Kuiper said: “Because religion is rooted in man’s heart, it is an emotional as well as an intellectual and practical matter. Therefore music can be used to intensify and purify our religious life. It is a gift of God and is designed to kindle lofty and holy emotions in the human breast though sinful man is inclined to pervert it to stir up base and lustful feelings. Feelings are to our religious life what wings are to a bird. The songs of faith make it easier for us to rise to heights of spiritual bliss. Without the songs of hope it is difficult to pierce the veil of the future and look out upon the glory that awaits the sons of God. Our souls find it difficult to lose themselves in the ecstasies of a holy love or of pure devotion until sacred music opens the floodgates of our inner life. It warms the heart, and the congealed waters of worship melt under its flame and begin to flow toward the sea of eternal praise to God. We regard sacred music as one of the valuable and indispensable means of grace which God has given His Church…” Rev. Kuiper stated further that the choir could aid a congregation significantly in its congregational singing and stimulate the adoration of the congregation by its own anthems of praise. 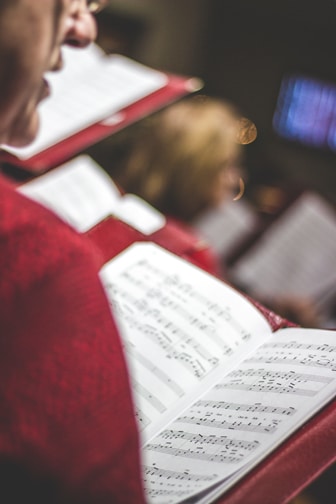 Others argue that the elaborate arrangements for song by the Levitical singers in the temple service, which is spelled out in the Old Testament, is no warrant for having special singers in the services of the New Testament churches,because it was part of the symbolical and typical character of Old Testament worship and therefore was abolished by the redemption of Christ. But as Rev. Kuiper has stated: “There was nothing typical in that singing of the Levites, as there was, for example, in the animal sacrifices and cleansings of the Old Testament sanctuary. If that singing was typical, if it belonged to the ‘shadows’ of the dispensation, we should abolish all singing in our New Testament worship. True, the song of the Levite choirs was characteristic of the Old Dispensation insofar that is was not supplemented by congregational singing. The church today is no longer in its minority and should not be silenced by any choir. But his does not mean that a part of the church, speaking for God (by singing the words of His Word – LVH) may not sing to the edification of the church as a whole; nor that a song of praise by the choir, speaking for the congregation to God may not be used….”

We should remember too that not only Levitical singers took leadership in Old Testament worship. Ezra 2:64, 65 says: “The whole company numbered 42,360, besides their 7,337 menservants and maidservants; and they also had 200 men and women singers.” The books of Chronicles abound with proof that by David’s time the music program was well established as part of the temple ritual. I Chronicles 6 traces the lineage of chief musicians down even to Korah, the cousin of Moses and Aaron. The Old Testament music program boasted an impressive chorus and orchestra numbering 4,000, trained in 24 groups with directors and experts to maintain the traditions of the past and insure the continuing supply of musicians for the future.

THE ROLE OF THE CHOIR

The choirs in the church fill a dual role in the worshiping congregation. First, the choir provides strength and leadership in the congregation’s singing of psalms and hymns, the familiar and the unfamiliar. The choir also edifies the congregation by rendering artistic Biblical anthems of a degree of difficulty and in a manner not attainable by the congregation, thus providing a spiritual exhilaration which loosens the congregations from their earthly ties and cares and lifts them heavenward. The choir which sings with excellence, and in accord with principles discussed here in previous articles, helps to prepare hearts and minds for closer communion with God. It can also help to reinforce in song the message of the pastor.

Prayer and praise accompany the proclamation of the Word in worship. Sometimes this prayer and praise is spoken; sometimes it is sung. When sung, prayer and praise can be enhanced by the excellent leadership of the organist and the choir — “handmaids” of the gospel, eager to do their Master’s bidding.