How many old people are there in your church? Tough question, almost always subjectively answered. Teenagers think anyone over 30 is near retirement. Once I had a call to a congregation in Wisconsin. On the phone, a younger member told me that theirs was “an old congregation” requiring much pastoral work with the aged. The VP of the council, an older elder, told me it was a “young church,” with pastoral needs that seldom included visiting older people. Interesting difference in perspective!

It is important to determine the kind of people to whom you are called to minister. In Dallas, I am one of the older members of the church at 43. In my previous charge, I was a mere child compared to the 100+ members over 80 and the 25+ members over 90, not to mention the hundreds of people living in their “retirement years.”

In the next couple of months, we’ll look at your duties, both as elders and as deacons, in providing pastoral care for people in their “golden years.” In this column, our focus will be on those living in nursing homes. In a subsequent one, we’ll look at some special challenges in caring for and ministering to the growing population of healthy retirees.

Is it fair to say that the aging of the general population and the aging of the church place special demands on office-bearers? I believe it is. Clearly, as people get older, as they live longer (due to superior nutrition and better medical care), many more will face the struggle of life in a nursing home. One old saint perceptively observed: “When you move in here, you know you‘re going to die here. There’s only one way out-the funeral director’s gurney. That’s depressing!” He was right. Wise and compassionate pastoral elders will have to be increasingly sensitive to the need to visit such people regularly. Some, it is true, live in facilities where many of their friends live, more like an apartment building for old cronies. (My grandma lived for a time in the “Holland Home” in Chicago. Most of the people there were brothers and sisters in faith. Wonderful camaraderie existed, and the sense of loneliness was virtually non-existent.) But not all nursing homes are like that, and not all older people are privileged to have access to such. Often, the elderly and infirmed are placed (Note the passive verb “are placed.” It’s significant!) in available care facilities that are less than ideal. I’ve visited folks in places that smelled like urine, where the day was spent sitting by a window, wistfully thinking and remembering, always brought back to the reality that there is nothing more to do (except maybe Bingo at 10:00). 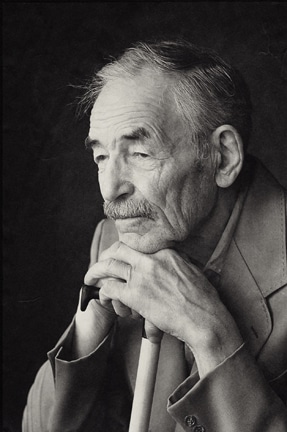 It is clear that even strong believers require encouragement in such a setting. Discouragement sets in all to easily. Perhaps, facing their advancing years and the prospect of “lingering” (more frightening to many than death itself, these dear folks require the comfort of God’s word to assure them that they belong to Him. I believe an important part of our ministry to such people is to challenge them to be busy in service to Christ where they are. Occasionally, they must be rebuked when they become so full of self-pity as to drive away those who love them most. And,just as clearly, the family of God has a responsibility to assist the immediate family to provide these things.

Does the elder have to do it all himself? Absolutely not! In a former congregation, we had one retired elder who could no longer serve in office because of some physical limitations. We drafted him to coordinate nursing home visits. He selected several other older gentlemen, and they covered the homes for us reporting to the elders when they thought special circumstances required special attention. It was wonderful, both for these brothers who now had an important ministry, for the nursing home residents who now received needed attention and love, and for the elders who were relieved of a heavy burden of time and responsibility. Were I to do it over again, I’d encourage older women to do such visiting to other women, couples to do such visiting with other couples, and so forth. I’d also give the visiting teams some specific training, helping them focus their visits on more than just social calls.

Ministering to saints in nursing homes must be specific to the situation. That is, you must not, by your visits, continually send the message that you are the care giver and they the recipient. Rather, as members of the body (Refresh your memory of I Cor. 12. It applies to this situation, too!), they have a duty to care for each other! Try to get them to commit to visiting 2 or 3 other people within their nursing home each day. Challenge them to read Scripture to those who cannot read, to become involved in Bible Studies (even to lead, where possible), to pray with each other. Try to arrange for the group to gather together to listen to a sermon tape, or to a broadcast (on a speakerphone?) of your church’s worship service. Call them to be a community of faith, not just a community of individual old people with mental or physical infirmities. In other words, pastor them with purpose!

Evangelism? In the Nursing Home?

The above suggests a pastoral/elder strategy for care for saints. But not all people in nursing homes are converted to Christ. I vividly recall one old codger named Dick who was a foul–mouthed 92-year-old. He drooled tobacco juice on his shirt, hissed and spat at visitors, cursed continually, and literally chased people out of his room. No one liked to visit him. Repeated visits over a span of more than a year (I can be stubborn) softened him to me. I discovered that he had one son, living 200 miles away, who never visited. He had no other family. He chewed tobacco only because he could not light his beloved pipe anymore. His arthritic fingers wouldn’t work. When I offered to buy him some good tobacco, fill his pipe once in a while, and enjoy a good pipe with him, his eyes teared, his heart softened, and we began to talk about sin, our Savior, and repentance. (OK, I can hear you now, scolding me for smoking and for leading him to that sin. In the first place, I was young, so I quit. In the second, he was 92. What was I going to do, shorten his life expectancy?) I am not quite sure whether or not he ever was converted. There seemed to be evidence of real faith, but, at 92, he was not always cogent. Of this I’m sure: had I not been diligent, faithful, persistent, and somewhat flexible (pipe tobacco has never been suggested as an evangelism tool before!), I never would have had the opportunity to speak of Christ with the crusty fellow.

No, the point is not to encourage a “pipe smoker’s evangelism club for nursing home visitation.” It is, rather, to suggest to you who visit such homes to be sensitive to the many old people there who face the end of their lives without the comfort of belonging to Christ. What a fearful thought! Make yourself available to them. Challenge the old saints who live there to be evangelistically sensitive, too. You may not overlook this important ministry.

Nothing of what I’ve described above belongs exclusively to the elders of the church. They are, to be sure, primarily responsible for the spiritual care of the aging saints as they are for all other members of the church. They, most likely, will be active in a visiting ministry. Not all church people are. Certainly, however, elders can make wise and profitable use of other members of the church in fulfilling aspects of this ministry. Deacons are charged with managing the resources of the church, and pursuing stewardship in service to Christ. When a church member is faced with a nursing home bill for his or her parent or spouse, it often causes some sort of emotional tailspin. Such costs can be, and usually are, astronomical. It is not always appropriate to assume the deacons will be there, checkbook in hand. But it is fair to suggest that the diaconate be the resource within the church able to counsel with families in this situation, knowledgeable about the laws, the local, state and federal agency provisions and tax implications of such arrangements. In today’s climate, just as a good and proper Last Will and Testament is an exercise in Biblical Stewardship, so is wise planning for nursing home care. I encourage the deacons to be prepared and willing to provide such guidance and counsel. In so doing, they will serve God’s people well

Dr. Sittema, editor of this department, is the pastor of the Bethel CRC in Dallas, TX.