Grandpa took Carol an his knee and said, “I’m going to tell you a Christmas story.”

Carol was delighted. Grandpa was a wonderful story-teller. And Christmas was coming in a few days. Carol was six years old.

This was Grandpa’s story. There was a rabbit that we shall call Hopper. Hopper loved to eat grains of oats. His mother warned him not to eat so much of the rich food. But he loved oats and found it hard to leave the grain alone.

One day a big truck dropped a whole load of the grain right in the middle of the field. There had been so much oats that year that the granaries couldn’t hold it all.

Hopper was happy. He got to work at once, eating oats. He was so busy eating that he didn’t notice another truck coming. The truck dumped its load of oats right on poor Hopper. He wriggled, kicked and squirmed. Before he could dig himself out from under the big pile of grain another truck came with its load of oats, and another, and another. It was hopeless. Hopper couldn’t dig himself out from under the mountain of oats, and the life was choked out of him.

“But, Grandpa,” protested Carol, “that’s not a Christmas story at all.”

“It doesn’t sound like one, does it, my dear,” said Grandpa in a kindly tone. “But it really is a Christmas story. The story is really about thousands and thousands of people around Christmas time. These people think only of good things to eat, more eats, toys, fun, gifts and more gifts. They think only of things and their souls choke under the mountain of things. This mountain of things chokes the real life and joy out of Christmas for such people.”

Yes, it’s only a story. But may its thrust not be lost on us. What a pity it is that things and more things so often choke the liFe out of Christmas. Christmas gets to be a hectic pace, a mad rush, overloaded stomachs, tired bodies, pampered children. Tinsel, candy, nuts, food, presents -that and that only is Christmas to so many. And, in too large a measure it is that also to many Christians.

What a pity that this day with its utterly blessed meaning should become that to so many. Christmas should rather enter our hearts as an angel’s song. Christmas should fall on our souls as a hymn coming through the crisp night air.

To this troubled, tormented earth with its wars and tumults, its suspicions and hatred, its fearful possibilities For destruction, Christmas should come on cushioned feet, speaking to men of the amazing love of God in Christ Jesus, of the peace that passeth understanding, of the forgiveness of sins in the shed blood of Him who was born in Bethlehem in order to die on Calvary’s cross.

Christmas means “God so loved the world that He gave His only begotten Son, that whosoever believeth on Him should not perish but have everlasting life.”

Thus truly understood Christmas becomes something more than a quiet voice with its message of infinite peace. It becomes a call like that of the clear, penetrating, bell.like sound of the trumpet, beckoning men to repentance, to confession, and to devoted service to him who was born the King of kings and the Lord of lords.

Let our prayer be that the true meaning of Christmas may burst upon our souls with all the beauty of an angel’s song. May Christmas mean Christ to us, Christ as our Savior from sin, Christ as the King of our lives. May we have Christmas, real Christmas. 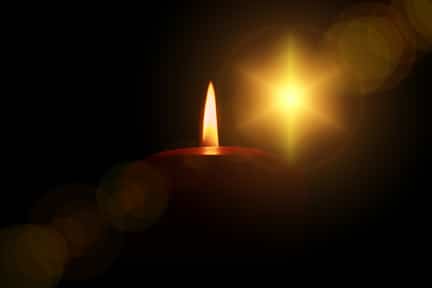