When Ebenezer Scrooge meets a group of Londoners collecting for the poor in Charles Dickens, classic “A Christmas Carol,” he dismisses personal responsibility for his fellow men by asking if there are not enough poorhouses and debtors prisons in the country.

Flash forward to 1996 and the state of Maryland where recently a group of religious leaders met with Gov. Parris Glendening and told him that the government—not the church—is primarily responsible for helping the poor. Religious leaders, they said, are overburdened with their soup kitchens and other programs and can assume no additional responsibilities.

As the federal and state governments reduce their levels of welfare funding, churches, synagogues, mosques and others like them must recall an earlier time when religious people were on the front lines in the war on poverty and the state was a last resort, not a first resource.

One problem in fighting poverty is that people see the poor as a group and institutions as the solution. If the institution of government attempts to transfer responsibility for the poor to religious institutions, it will fail. The response to poverty must be personal, not institutional.

According to the Maryland secretary of state’s office, there are 53,253 families or 185,083 individuals, receiving welfare payments in that state. There are more than 5,000 places of worship in Maryland. So, if every place of worship became responsible for just 10 families, or 37 individuals, the welfare roles in Maryland could be wiped clean. Bigger churches could handle more, smaller ones less. Put this way, the end of welfare as we know it is within our grasp. In a state whose population exceeds 5 million, even those with no church affiliation might help, further reducing the “burden” on the churches.

Religious bodies are about the business of changing the direction of people’s lives. Not only should they be helping them out of material poverty, they should be helping them attain spiritual riches that will change their way of living. But if churches see the poor as a burden and the state as primarily responsible for helping, they are rejecting one of their fundamental mandates and opportunities. Ministering to the poor provides reciprocal blessings. Too many churches today appear more interested in preserving their programs and institutions than in taking on the role of servant, emulating the Leader they profess to know and follow. 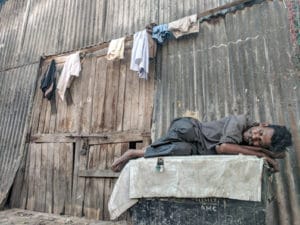 Maryland officials should send a computer printout to all 5,000 places of worship in the state, informing them of those in their communities on welfare. Clergy should begin preaching messages about the privilege of helping the poor out of their poverty. The state grants certain tax breaks to religious bodies, expecting them to perform work that the state cannot or should not do. It has a right to expect a return from the tax exempt. If church leaders think government ought to be the primary provider for the poor, perhaps the state ought to be asking the churches to help foot the bill.

One of the excuses given by the Maryland clergy for not doing more is that many of the poor have no ties to a church. Whose fault is that? It is an indictment of churches and an incentive to do more than sing “Blest Be the Tie That Binds.”

The federal and state governments are providing an opportunity to places of worship to reclaim their mandate and to bankrupt the poverty industry, which has grown large and bureaucratic primarily because churches and their enormous membership have withdrawn from the privilege of serving God by redeeming the poor.

Professor Marvin Olasky asks the right question in his book, The Tragedy of American Compassion: “Are we offering not coerced silver, but our lives?…If we talk of abandoned children, are we willing to adopt a child? Most of our 20th century schemes, based on having someone else take action, are proven failures. It’s time to learn from the warm hearts and heads of earlier times.”