The trumpets of Revelation 8–11 have been sounding, shaking the created order with trumpets one through four, unleashing the hordes of hell with trumpet five, and ravaging the earth with war and rumors of war with trumpet six. The trumpets have been sounding since the time of Christ’s first coming. They will continue to sound until Christ comes again.  These trumpet blasts are intended to warn an unbelieving world of the judgment to come, summoning them to repentance and faith in Jesus Christ. These trumpet blasts are harbingers of the last trumpet that will sound on the great and coming Day of the Lord. The Day is coming when the last trumpet will sound! 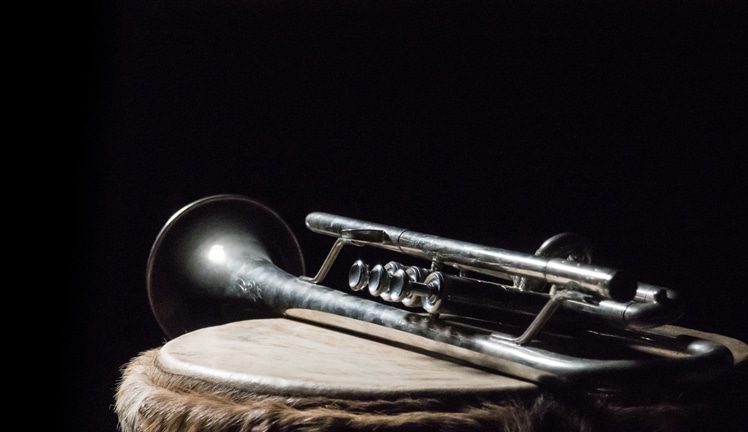 There is a world to come, and that world is our goal. The goal is not this world; the goal is the world to come. The goal is that world to which Christ brings us. The goal is that world which Christ brings. Michael Horton writes: “Christ’s kingdom, though present in the power of the Word and Spirit, is nevertheless both qualitatively and quantitatively different from the fullness of the kingdom in the age to come. Although the kingdom is spreading throughout the world, it is never identified with the world in this age, but must always be distinguished from the temporal kingdoms and cultural identities that believers share with unbelievers. Only with the seventh trumpet of Revelation 11:15 do we finally hear the announcement: ‘the kingdom of this world has become the kingdom of our Lord and of His Christ, and He will reign forever and ever!’ It comes as a decisive event, not as a gradual process, for it is not the Church that carries the world into the Promised Land on her shoulders, but the Church herself whom the Rider of the White Horse carries on His train. It is He who, at the end of the age, sends His angels to drive the Canaanites out of the land and to bring Sabbath rest finally to Israel’s war-weary camp.”1

In verse 18, the Church then sings of judgment and salvation. First comes the judgment of God upon the wicked: “The nations were angry, and Your wrath has come, and the time of the dead, that they should be judged.” The nations were angry, and God’s wrath has now come. The nations will be angry for all eternity, but they will never again rise against God. Christ will reign forever and ever. Next, the Church sings of her salvation: “And that You should reward Yourservants the prophets and the saints, and those who fear Your name, small and great.” The Church is rewarded with the gift of her inheritance. This reward is not earned; it is a gift of grace. Otherwise, why would the Church give thanks? Finally, the Church sings again of the judgment of God upon the wicked: “And should destroy those who destroy the earth.”

The structure of verse 18 then, is as follows: judgment upon the wicked, the reward of the righteous, followed once more by the judgment of the wicked. Why this structure? Why the movement from the judgment of the wicked to the salvation of the righteous and back to the judgment of the wicked? I would submit to you that the movement is to underscore the nature of our inheritance. Note the last phrase, “and should destroy those who destroy the earth.” This earth, this present world, is capable of being destroyed. In fact, it is destined to be destroyed.  It will be destroyed and it will be removed. In other words, this world, this earth, this creation, is only provisional, only temporary.  It was never intended to be eternal. It was never intended to remain forever. The original creation was intended, from the very beginning itself, to give way to something better, namely, the eternal, transcendent order of the everlasting kingdom. This present heavens and earth will give way to the new heavens and the new earth.

The movement in verse 18, from judgment to salvation to the destruction of those who destroy the earth, is intended to focus our sites upon the inheritance that is ours inJesus Christ: the new heavens and the new earth, wherein righteousness dwells, the eternal kingdom that can never be shaken, the eternal kingdom in which our Lord and His Christ shall reign forever and ever. That is our inheritance! Not creation regained. Not the garden restored. Not this world. Heaven is our inheritance!

And we receive it all of grace. Is that not where verse 19 finally points us? “Then the temple of God was opened in heaven, and the ark of His covenant was seen in His temple. And there were lightnings, noises, thunderings, an earthquake, and great hail.” The temple of God was opened in heaven. Make no mistake about it, this is not the earthly temple; this is the true temple made without hands, eternal in the heavens. This is heaven itself. This is the presence of God Himself, now being opened to us.

“And the ark of His covenant was seen in His temple.” The significance of this beautiful statement is found in the Old Testament imagery of the Day of Atonement. Once a year, on the Day of Atonement, the high priest would enter into the Holy of Holies with the blood of the sacrifice. He would take that blood and sprinkle it upon the mercy seat. On top of ark, there were the cherubim, those heavenly beings that guarded the presence of God. Indeed, God Himself said that He dwelt between the cherubim. Inside the ark, of course, was the Law of God, that Law that all have transgressed, that Law against which all have sinned. And what do you find there between the presence of God and the transgressed Law, but the mercy seat? And what do you findon that mercy seat but the blood of the sacrifice? Do you see it? Do you understand it? The blood of Christ has been shed, covering all our sins, so that we may stand in the presence of God with our sins washed away and clothed in the righteousness of Christ! The blood of Christ has availed for our salvation! The blood of Christ has washed away all of our sins! “The ark of His covenant was seen in the temple.” Do you see how this passage ends with the sovereign grace of our God? The Lamb that was slain, the One now exalted as the King of kings and Lord of lords is the very bulwark of our salvation, and that for all eternity!

There is one more thing to be pointed out. Note where our passage begins: it begins with God (v. 15). Note where our passage ends: it ends with God (v. 19). We begin with God, we end with God. And there in between, what do we find, but God giving Himself to His people? We begin with the throne of God, we end with the throne of God, and there in between we have the mighty acts of God in Christ Jesus by which He brings us to His throne, there to dwell for all eternity!

Here, in Revelation 11:15–19, then, we have reached the end. We have reached the end, though not exhaustively. We do not have here the full description of the end; we do not have here a developed description of heaven; for that we’ll have to wait until we proceed further in the book of Revelation. But here it is sufficient for us to know, that even in heaven, we shall never cease worshiping God for the glory of His sovereign grace!Here, in Revelation 11:15–19 we have the last trumpet. God has told us what the end will be. We know how the story ends with the sounding of the last trumpet. As we hear the trumpets sounding even now, and as we anticipate the sounding of the last trumpet, we are led to delight all the more in Christ Jesus, our blessed Savior and Lord. Christ is on the throne, and when the last trumpet sounds, He will bring His kingdom, and He will reign forever and ever. And because of His sovereign grace, we shall see His face, and we shall reign with Him forever and ever!