Where do you turn or seek refuge when the stresses of life pile up too high to bear? Friends? Activities? Quiet times? Does public worship come to mind? If not, maybe a reminder of what worship is will give you reason to find your delight and rest there.

Public worship is the saints’ delight and repose in this life. Amidst the day to day spiritual war and against our deadly enemies, the devil, the world, and our own flesh, worship is the transcendence, the beauty, and the “joyful noise” (Ps. 100:1; ESV) of Biblical liturgy that stays our souls. The great Church Father, Gregory of Nanzianzus, wrote in a poem to his deceased father that at the end of his father’s life, in all his pain and sorrow, it was the liturgy that sustained his soul.

David was one such saint whose soul was tormented day and night by his sin and his enemies, but at the same time, who was consoled in the mending arms of the Lord: “To You, O LORD, I lift up my soul.” 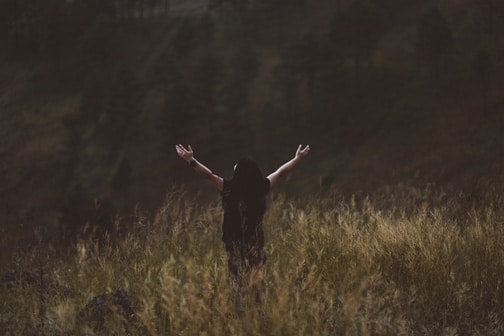 It is both fascinating and providential that Psalm 25 follows a public liturgy for the entrance of the ark of the covenant into the tabernacle ofmeeting. We can picture the priests calling out, “Who is this King of glory,” to which the assembly replied, “The LORD of hosts, He is the King of glory!” (Ps. 24:10). On the heels of these words, when the LORD had ascended the Mount and was enthroned as King of Israel, David lifts up his heart and soul to the Lord in Psalm 25:1. His faith and soul now had an objective and tangible place to which it could be directed: the mountain of the LORD.

And so do we. Now that the substance of the Law’s types and shadows has come in the Person of our Savior, we have the very image to which those types pointed to! It is He who was qualified to ascend that holy hill of Golgotha. As John’s Gospel proclaims, it was in His humiliation upon the cross that He was truly glorified: “The hour has come that the Son of Man should be glorified” (Jn. 12:23). It is He who trod that hill with “clean hands and a pure heart” (Ps. 24:4) having actively obeyed the Law in our place “all the time He lived on earth” (HC 37). It is He who therefore “presented Himself in our place before His Father” (BC 21), dying on account of our sins, rising and ascending on account of His righteous merit. Now we, through faith alone, can lift up our souls amidst our sins, doubts, temptations, and struggles and access the throne of grace in the heavenly Jerusalem.

Lifting Up Our Hearts in Worship

Our experiences are played out in the heavenly drama of the book of Revelation. In chapters 2-3 we see the struggling Church on earth. The weaknesses of the seven Churches are our weaknesses. But immediately after describing this, John, in chapter 4, is lifted up into heaven to behold the Church in heaven as its worships around the throne of the Father and of the Lamb. But this scene is not just of those who have died in the Lord—no—it also describes the worship we join when we assemble on the Lord’s Day.

We have the privilege of ascending the hill of the LORD and into the heavenly throne room not just three times a year as the Israelites were commanded under the Old Covenant, but weekly. In my congregation, after the call to worship, I proclaim to the congregation, “Lift up your hearts!” And the people respond, “We lift them up to the Lord!” David’s words in Psalm 25:1 have come down to us in the liturgy of the Christian Church in the words of the sursum corda (Latin, “lift up your hearts”).We may not all know it in this form, but we all know it from the Eucharistic liturgy of Petrus Dathenus:

That we, then, may be nourished with Christ, the true heavenly bread, let us not cling with our hearts unto the external bread and wine but lift them up on high in heaven, where Christ Jesus is, our Advocate, at the right hand of His heavenly Father.

The Teaching of the ‘Sursum Corda’

As we weekly lift up our hearts and souls to the Lord in worship, of what are we reminded?

First, it reminds us that worship is a heavenly experience. Public worship is not mundane, not trite, not laborious, but it is a transcendent communion with He “who was dead, and behold, [is] alive forevermore” (Rev. 1:18). After a week of labor, stress, and anxiety in this world which is in bondage to decay, time stops as we enter the incorruptible place of eternity – or better yet – as eternity comes to us!

The ancient Church, Father Cyril of Jerusalem, explained the sursum corda to new converts in this way:

Then the celebrant cries: ‘Lift up your hearts.’ For truly it is right in that most awful hour to have one’s heart on high with God, not below, occupied with earth and the things of earth. In effect, then, the bishop commands everyone to banish worldly thoughts and workaday cares and to have their hearts in heaven with the good God. Assenting, you answer, ‘We have them lifted up to the Lord.’ Let no one present be so disposed that while his lips form the words, ‘We have them lifted up to the Lord,’ in his mind his attention is engaged by worldly thoughts. At all times we should commemorate God, but at least, if this is not possible to human weakness, we must aspire to it in that hour.

Second, the sursum corda reminds us that worship is an act of humiliation. St. Augustine of Hippo (354-430) says in Sermon 261, “The Resurrection of our Lord is our hope; the Ascension of the Lord is our exaltation…though we ascend, let us not be lifted up. Indeed, we ought to have our hearts lifted up, but to the Lord.” Here is the irony! As we lift our hearts up to the Lord, we are being cast down. As we ascend, we worship and bow down. As we lay down our lives as living sacrifices we offer “the sacrifices of…a broken spirit, a broken and a contrite heart” (Ps. 51:17); for “the LORD is near to those who have a broken heart” (Ps. 34:18).

Third, we are reminded that worship is a participation in the Gospel, which is outside of ourselves. As St. Augustine says in Sermon 227, it is a reminder to us “lest you should attribute to your own strength, your own merits, and your own labors the fact that you have your hearts thus lifted up to the Lord.”

We hear the Law read to us to bring us out of the idolatry of trying to be righteous in ourselves. We confess our sins in acknowledgment that we, like Paul, come to Christ “not having my own righteousness, which is from the law,” but only “that which is through faith in Christ, the righteousness which is from God by faith” (Phil. 3:9). We receive absolution from our minister because the Gospel comes from Christ. We lift up our hearts before the Eucharist because in it, like in the Gospel, Christ is only received by faith (BC 35).

So as you cry out in this life, “How long, O Lord?” (Rev 6:10), in the face of overwhelming sin, the onslaught of the world’s pressures, and the temptations of the Devil in the form of sinful seduction and false philosophies, may you find your only comfort in the public gatherings of the Church, saying: “To You, O LORD, I lift up my soul!”