At the end of February, 1993, I boarded a Boeing 747 in Chicago, bound for Frankfort, Germany, Budapest, Hungary and finally Beius, a small city in Western Romania. I was rather enthused, never having been to Europe before. I was also a bit hesitant, having little idea what the next 15 days would bring. 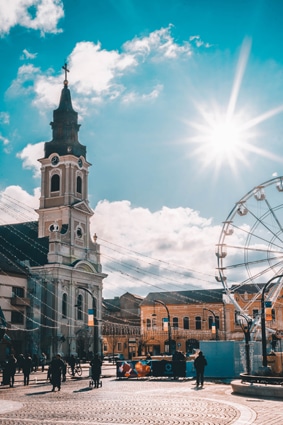 I had been invited to join a team of doctors, nurses, and other will-ing volunteers, to work in a clinic in Beius, only a few hours from where the Romanian Revolution began in 1989. The team was traveling under the auspices of REMM, the Romanian Evangelical Medical Missions organization founded by Dr. Peter Lucaciu, a Romanian who was able to establish permanent resident status in the US with his family prior to the Revolution. He has dedicated his life to evangelism and medical care in his native land. The next two weeks would see the doctors (6 in all, 5 seeing patients) treat over 2,000 patients, dispense over 2,800 pounds of medications (brought in our checked baggage), working all the while in primitive conditions, treating patients who had not seen a doctor for years, if ever. These days would also witness the same doctors, nurses and other volunteers going out at night—every night—for 3 or more hours to the Villages, meeting with groups of hungry believers and curious neighbors, testifying to the grace that is ours in Christ Jesus.

The medical personnel worked yeomen’s hours; the volunteers labored long and hard in supporting work, and all of us enjoyed our tiredness because we were so blessed.

During the 13 evenings we went out to the villages, we covered, as a team (15 people total) 117 villages, many of which had not heard the gospel since the end of the 2nd World War when communists came to power in Romania. I (the only…, pastor in the group) preached 31 times in those 13 days, three times at funerals, once in the public marketplace, and an hour lesson in the local public school on Noah and Jesus Christ! We all witnessed remarkable conversions, literally hundreds, over the span of two weeks, and we remarked more than once that the life of the church there is more like the stories in the book of Acts than like anything we’d ever seen in America. When the dear people heard the gospel, they didn’t respond cautiously, promising to “consider it for a few weeks,” smiling and suggesting they “might come back for another service some day.” No, they responded as the Jews did to Peter’s Pentecost sermon. “Brethren, what shall we do?” When told to repent and be baptized, the Jews on Pentecost responded immediately. So too in Romania. Immediately after the sermon, people would press forward to ask what to do next. They would ask us to pray with them, for them. They would drop to their knees, sometimes in the wet snow, and confess their sins, pleading for the forgiveness of God.

The church in Romania has been under oppression for 45 years. Communists systematically persecuted believers, beating pastors, bulldozing churches, threatening members, even sealing extant churches with official state seals to keep members from congregating. When entering the country, the list of contraband seized by customs was headed by “guns, illicit drugs and Bibles,” Seized Bibles were routed to a paper mill where they were turned into toilet paper—an intentional indignity.

One pastor I worked with, a fellow by the name of Istoc Traian, was typical of the consequences of the oppressive regime. He farmed to feed his family, but pastored 10 village churches because there were no other pastors. He ran himself ragged, having done 20 funerals in the month preceding our visit. His memory was scarred with the sound of bulldozers running at full speed up the street to demolish the little church building they worshiped in, with dozens of believers rushing to the building to pray and sing, and hoping that the bulldozers would stop. (They did, that time. But they came back.) Istoc lives on about $25 dollars per month and hopes and prays to be able to reconstruct a church in Dr. PetruGroza (the name of his village).

I could tell enough stories to fill the magazine this month. But that wouldn’t help you much. I would like to make a few observations over the next few issues however, that bear directly on the attitude, the understanding and the practice of the office of elder and deacon in our churches. These lessons are from Romania, but they are about Reformed churches in North America. I trust they will set you to thinking!

LESSON #1: THE WISDOM OF GOD

One cannot observe what is happening in Romania today without turning back again and again to Acts. The explosive growth of the early church is paralleled by that in Romania. The hunger of those who have never heard (thus having no calluses over their hearts) is much the same on the pages of Acts and on the streets of Beius. The power of the Word to shape and transform hearts and lives, effecting true conversion and persevering faith, is a striking parallel.

But of all the passages that struck me as critical in Acts, none hits me harder than 14:23 where we are told that the apostles “appointed elders in every church” as they traveled, preached, planted churches and then left. They appointed elders to care for the flock after the itinerant preachers departed. In Romania, there are about 2,000 evangelical churches in the entire country but they are served by only 200 pastors! That 10 to 1 ratio is worse than it seems. There are hardly any elders at aU in most villages, most churches. The pastor is expected to do all of the pastoral work, but, since the pastors are untrained, little pastoral work is accomplished. No matter the church (I preached in Baptist, Pentecostal [different than in the States], an orthodox evangelical prayer group and even brought greetings in a Hungarian Reformed Church), I found that evangelism is practiced with zeal, but the care for the myriad of converts is minimal at best. Little training is provided for the children besides singing and musical practice. There is no “Sunday School” or “Catechism” instruction. Nor is there pastoral counsel provided for the multitude of victims of the previous regime. Their lives fall apart, but there is no one to talk to. For years they feared everyone, for anyone could be an informant for the State Secret Police. Now they don’t know how to share one another’s burdens. And since there are no elders, the church can’t meet that need very well yet. How desperately these dear people need elders to hold their hand, discipling them into mature faith, helping them learn to make decisions Christianly and how to solve the struggles of life from the perspective of faith. In short, some one-on-one pastoral care! But there is none to be had.

In the States, we have a different set of givens. Here, most everyone has heard of Christ (although I am discovering few have really heard an accurate presentation of the gospel!)i we have many large, well-staffed and well-run churches, and we have many elders. But we still have little of that mentoring, that one-on-one discipleship that is so necessary for young and fragile believers in such a harsh world. Here there is too much individualism perhaps for different reasons, but the end result is the same.

“They appointed elders in every church.” God is so wise. He not only calls people to repent and believe, but immediately provides, in each local church, the means by which those new citizens of the Kingdom are to be nurtured, cared for and brought to strength and maturity.

But how far short our practices can fall from God’s intended purposes. In Romania, they have no elders. It will take many months, maybe years, to train them, equip them and establish the pastoral office in the hundreds of isolated villages throughout the country. In the US, we have many elders. But in so many churches, the office of the eldership has eroded into a board position, an administrative task heavy on attendance at meetings and light on pastoral work in the spirit of Acts 20:28f. Indeed, God is wise to provide this gift to the church. We can be so foolish not to avail ourselves of this wonderful blessing.