The recent, intense media coverage of Islam has provided a reminder of the power and grip that legalism holds upon the human mind. It is a perennial view that we must keep the divine law and thereby earn heaven by human merit. Five centuries ago, Martin Luther drew a radical distinction between the gospel of grace and the legalism of all other religions outside of biblical Christianity:

“For if the article of justification be once lost, then is all true Christian doctrine lost. And as many as are in the world that hold not this doctrine, are either Jews, Turks, Papists or heretics” (Commentary on Galatians). As Luther contemplated religions of works in the sixteenth century, he immediately thought of Judaism, Islam as exemplified by the Ottoman Turks, late-medieval Roman Catholicism, and various other heretical splinter groups.

The Pharisaic movement of the first century demonstrates the tendency of legalism to slide into fanatical excess. Even as Jesus pronounced woe upon the Pharisees, He reflected upon their lack of balance: “For you tithe mint and dill and cummin, and have neglected the weightier provisions of the law: justice and mercy and faithfulness” (Matthew 23:23). They were, as Paul testified, ‘The strictest sect” (Acts 26:5). Paul’s assessment was an insider’s perspective, for he himself had been a Pharisee, and “as to the righteousness which is in the Law, found blameless” (Philippians 3:6). By grace, he came to embrace a truly Christian perspective regarding law righteousness, the righteousness that a person seeks to build up by meticulous keeping of God’s law. He came to regard his past religious achievements as dung (as the King James nicely translates the Greek skubalon in Philippians 3:8). For Paul, there was something far superior to human righteousness which, at best, is nothing but filthy rags in the sight of a holy God (Isaiah 64:6). Paul desired “the righteousness which comes from God on the basis of faith” (Philippians 3:9).

Infecting Even the Church

The power of Pharisaic life and thought is demonstrated in its outbreak even within the apostolic church. Luke explicitly refers to “the Pharisees who had believed,” in the sense that they indeed believed that Jesus of Nazareth was the Messiah (Acts 15:5). Their position articulated at Antioch and at Jerusalem was that salvation depends upon the keeping of the divine law, namely the practice of circumcision and the observation of the Mosaic Law, in terms of its ceremonial aspects (Acts 15:1, 5). The position of the Judaizers, of course, was completely rejected by the Jerusalem Council. Peter nicely affirmed the gospel message that God cleanses hearts “by faith” and that “we are saved through the grace of the Lord Jesus” (Acts 15:9,11).

Unfortunately for the church, the Jerusalem Council did not forever bury the legalistic mentality, which resurfaced in monasticism and the idea that the devoted monk earns eternal life. Benedict of Nursia reflects the legalistic mentality which became so wide-spread in the medieval church: “Let us, therefore, gird our loins with faith and the performance of good works, and following the guidance of the Gospel walk in His paths, so that we may merit to see Him who has called us unto His kingdom” (The Rule of Saint Benedict). Luther, commenting upon the religious life of many during his time, declared, “They build their confidence … on the works they have done” (Treatise on Good Works). 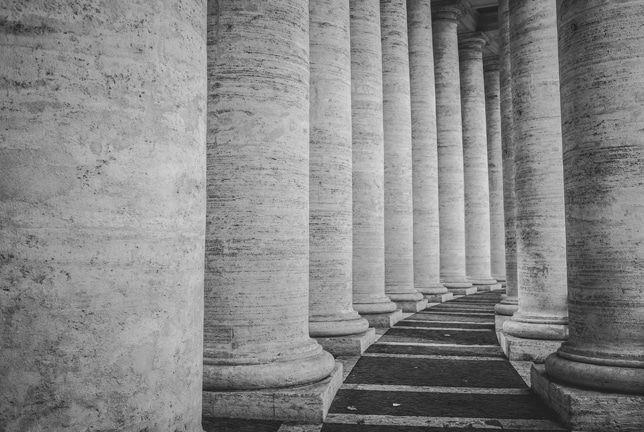 Early in the seventh century, a new legalistic religion appeared through the efforts of Mohammed who saw himself as being in continuity with Abraham, Moses, and Jesus. In reality, the discontinuity between Mohammed and the biblical religion of grace is total. Consider, for example, the Islamic doctrine of jihad. John Keegan, the premier military historian of our time, has rightly observed, “Muhammad, unlike Christ, was a man of violence; he bore arms, was wounded in battle and preached holy war, jihad” (A History of Warfare, p.33). Although many Muslims have been and are peaceful, Islam itself is a religion of violence. In the century following the death, of Mohammed in 632 A.D., the Arabs conquered one of the largest empires in history, reaching from the Indus River in the East to Spain in the West. In addition to this historical evidence, there is the textual evidence coming from the pen of Mohammed himself who exhorted his followers: “O you who believe, fight the unbelievers who are near to you” (Koran 9:125). The Islamic armies which exploded out of the Arabian peninsula wielding the sword of conquest were motivated by Mohammed’s example and his summons to fight the infidel.

The fundamental distinction between true Christianity and Islam, however, has to do with the antithesis between a religion of grace and a religion of law. The contrast is strikingly illustrated in terms of Suleiman the Magnificent, the sixteenth-century Sultan of the Ottoman Empire. No doubt, in his time, he was the most powerful man on the earth. Luther certainly recognized the incomparable strength of his forces. “The Turk is such a mighty lord,” Luther wrote, “that no kingdom or land, whatever it is, is strong enough to resist him, unless God performs a miracle” (On War Against the Turk, p. 184). Although Charles V controlled more territory, he nevertheless had limits placed upon his power in the position of Holy Roman Emperor. Suleiman, in contrast, was an absolutist. Also known as Suleiman the Lawgiver, his objective was to establish the perfect order, governed by Islamic law. Whatever Suleiman decreed became a regulation for life. For Suleiman, there was a succession of great men in history: Moses, then Jesus, followed by Mohammed and finally Suleiman himself.

But while Suleiman conquered in the Balkans and even laid siege to Vienna, Luther in Germany preached and lived a very different theology. Defining what he meant by the concept of passive righteousness, Luther wrote, “For in this we work nothing, we render nothing unto God, but only we receive and suffer another to work in us, that is to say God” (Commentary on Galatians).

The legitimacy of the sharp antithesis drawn by Luther between biblical Christianity and all other religions is underscored by Paul’s assessment of what the Galatians embrace of the Judaizer’s teaching really entailed. “I am amazed,” Paul wrote, “that you are so quickly deserting Him who called you by the grace of Christ, for a different gospel; which is really not another” (Galatians 1 :6–7a). Their desertion from the apostolic gospel involved their reception of a religion which was not another of the same kind, but one which was completely different. Thus, he must warn that the attempt to be received by God through human effort and achievement is disastrous: “You have been severed from Christ, you who are seeking to be justified by law; you have fallen from grace” (Galatians 5:4).

The Jews, steeped in the mentality of legalism, once asked Jesus, “What shall we do, so that we may work the works of God?” (John 6:28). This indeed is the typical question of the natural man who knows not the gospel: What work of righteousness shall we do? How shall we establish our own righteousness (Romans 10:3)? Jesus’ response is crucially instructive: “This is the work of God, that you believe in Him whom He has sent” (John 6:29). Luther indeed properly maintained, “The first, highest, and most precious all good works is faith in Christ” (Treatise on Good Works). What, though, does it mean to believe in Christ? Jesus himself gives the answer in the same discourse: “He who comes to me will not hunger, and he who believes in me will never thirst” (John 6:35b). The parallel clauses are significant: To believe in Christ is to come to Him. If we come, He assures us that He will receive us: “All that the Father gives me will come to me, and the one who comes to me I will certainly not cast out” (John 6:37).

Through Christ and Christ alone, apart from works, we have hope, a glorious future: “This is the will of my Father, that everyone who beholds the Son and believes in Him will have eternal life, and I myself will raise him up on the last day” (John 6:40).