We’re crazy, you know. Our society becomes temporarily insane, beginning earlier and earlier each year. We become faddish: decorating front lawns with garish and silly plywood cutouts of Santa and reindeer, or (my all time favorite in the North Dallas “light shows”) the 7 dwarfs. (What in the world does Dopey have to do with Christmas?) Most become obsessive-compulsive: we chase all over buying gifts for people we love (and way too many for people we ought to love but really don’t! You know them: the “obligatories,” those we favor purely out of a sense of business or personal duty). We chase to school or church programs we don’t want to attend, watching kids who don’t want to perform; we spend hundreds of dollars on cards and stamps, not to mention hours wondering whether we received a card from Bill and Wilma last year. We plan extravagant entertainment, either hosting or attending but usually both. And, more than likely, we travel hundreds of miles by car or plane to do all of the above. What’s worse, we know it’s all coming, this insanity of pressure and stress; we clear our calendar to try again to accomplish the impossible, and we resent it more and more every year without ever doing anything to change it. We feel trapped.

How to keep perspective? Here are a few sneaky questions to whet your holiday whistle, a few historical observations to inform your thinking, and then a few concrete suggestions to “reform” your Christmas season. 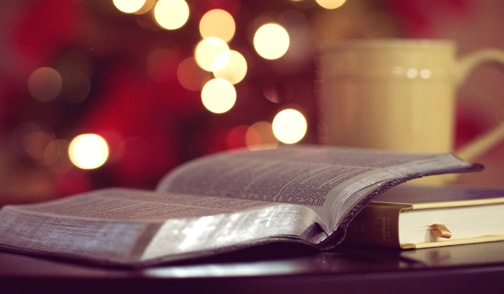 3) What countries were the “3 Kings of Orient” kings of?

4) Is our custom of gift-giving Biblically based?

5) Does God really prefer that we give expensive gifts, patterned after the “gold, frankincense and myrrh”?

6) Which animals, besides the camel, does the Bible say were in the barn in which Jesus was laid in the manger?

7) What does “There was no room for him in the inn; you must make room for Jesus in your heart” mean, and is this really what Christians are supposed to do?

9) Does the abbreviation “Xmas” mean that the person who uses it is trying to remove Christ from Christmas?

10) T or F: The practice of modern American families to travel to warm resort areas like Florida or Hawaii originated with Joseph and Mary and their vacation in Egypt soon after Jesus was born.

The answers, which appear at the end of this article, might surprise a few of you. OK, I’ll admit, a couple were trick questions. But not everyone catches that! Let’s look at some facts, some myths and some Biblical principles.

First, the NAME “Christmas” derives from the early Medieval observance of Christ’s birth which involved 3 masses: one at midnight, one at dawn, one at mid-day. Hence, the day was called “Christ-Mass.”

December 25 as the traditional DATE of Christmas originated many years ago. Two conflicting stories circulate. The first, which is most probably apocryphal, is based on fantastic calculations and strange assumptions. Supposedly, calculations reveal that God created the world on March 25. Jesus, the “new creation,” was conceived at the same time. That conception would lead to a celebration of His birth 9 months later on December 25. The second, more likely origin of the date is that the practice of “celebrating” Christmas arose around 336 AD with the desire of Christians to offer an answer to the pagan nature feast of “natal is solis invicti” (“feast of the unconquered sun”). Virtually all scholars agree that there is little evidence suggesting that Jesus’ birth occurred around December 25.

Historically, many REFORMED CHRISTIANS forbade Christmas observance because of these traditional pagan connections. Scots and Puritans in the US focused instead on regular worship on the Lord’s Day, viewing “Christmas” with the same disdain as we would “ground hog’s day.” Others, of course, demanded but strictly regulated Christmas “celebrations,” preferring instead to mandate worship services and downplay merry-making. Still others became caught up in a romanticized traditionalism. I will never forget the angry/sad look on an older parishoner’s face the first time I observed from the pulpit that “swaddling cloths” were the poor Jewish equivalent of common “receiving blankets,” and that Scripture never says any animals were present in the barn with the manger. Her comment? “You took the mystical joy out of my Christmas!”

So, how does one keep one’s perspective? On balance, we probably cannot simply ignore a holiday that has so captured the minds and practices of our culture. (To “cancel” Christmas would scarcely be understood as a principal gospel protest!) Our unbelieving culture has a word for such folks: “Scrooges.” At the same time, we must have our eyes discerningly open to the radical difference of practices we see among Christians. Some eschew Christmas trees, wisely restrict gift-giving to a minimum, and focus their hearts and minds on Scripture to worship the “Word who became flesh and dwelt among us.” Others, particularly of conservative Scottish Reformed tradition, oppose holding mid-week services at all. Their opposition conflicts with many others whose traditions of worship on Christmas Eve, or Christmas Day (two separate traditions here!), are of long standing and deep conviction. Still others, it seems, are hip-deep in the secular spending traditions of a materialistic age, in party-going and the good works-based secularized “Christmas” of our modem pagan world. (“Remember, Santa will know whether you’ve been naughty or nice!”) Here, too, we are to “test the spirits” to see whether they are of Christ or of the world.

Key to a balanced perspective, I suggest, is to WORSHIP THE KING who humbled Himself to come to us in human flesh. That means gathering with other believers to worship; it means including in our worship the quiet humility of repentance and confession as well as the joy of redemptive celebration; it means firmly but gently guiding our children (not to mention ourselves!) through the Satanic morass of modem merchandizing and materialism, teaching them clearly that the joy of one’s “Christmas” is not determined by the number of gifts one receives. (Perhaps the worst among us are the adults who actually feel guilty because they haven’t bought enough gifts—very definitely a plural!—for this child, that niece, or that Uncle. Shame on us!)

It means, instead, (another bulleted list? ed.) forgoing (at least the majority of) our gift-giving to one another, and giving instead to a faithful missionary or ministry of mercy (suffering because year end donations are down due to public spending habits). It means avoiding credit card purchases that enslave God’s people to levels of debt that takes months, sometimes years, to retire. It means not spoiling our children and grand-children, something we’d avoid like the plague the other 11 months of the year, but which, strangely, we can somehow justify at Christmastime.

Let’s do something this year about the modem paganism that threatens to reduce God’s people, good conservative traditionalists all, to compromised idolatry. Let’s change our Christmas practices seriously, purposefully and irrevocably. Let’s together worship the King: with simplicity, with humility, with stewardship, with generosity to Kingdom causes in place of guilt manipulating buying binges, with faithful gatherings of believers in soft-hearted worship. Above all, let us reflect the “attitude” that “should be the same as that of Christ Jesus, who, being in very nature God…made himself nothing, taking the very nature of a servant, being made in human likeness” (Philippians 2:5–6). A humble Christmas to all!

ANSWERS TO QUICK QUIZ: 1. No 2. Who knows? 3. They weren’t kings. 4. Nope 5. You’ve got to be kidding 6. An ostrich, a llama, 3 armadillos and a colony of fire ants (OK, just kidding. There are no animals mentioned in Scripture). 7. Who knows? 8. The Bible never mentions Christmas. 9. No, it means they are trying to abbreviate a long word! Actually, the abbreviation probably came from some preacher who customarily abbreviates the name “Christ” by using its first Greek letter, written as a large “x.” 10. You need a vacation, with just your Bible for companionship!

Dr. Sittema is pastor of Bethel CRC in Dallas, TX, and a contributing editor of The Outlook.