If we were to look closely at Joseph, the husband of Mary, the quality of his life and character would soon reveal themselves. We witness first his compassion, then his obedience to the revealed Word of the Lord, and finally, his faithfulness to the requirements of the Mosaic Law. Compassion, obedience, and faithfulness—all the qualities of a righteous man.

In the Gospel of Matthew 1:18–25, Joseph receives the first of four messages from God, a divine revelation in the form of a dream. An angel informs Josheph that Mary, his bride-to-be, has conceived a child in her womb without human agency, only through contact with the Almighty Himself. To believe the announcement of this miracle, would surely require faith similar to the faith of Abraham, who is honored as the outstanding example in Scripture of a human being exercising faith in the promises of God. We can only wonder, what there was in the background of Joseph, a humble carpenter, which would allow him to embrace a truth that science, reason, and all of nature testified against.

It could be that this special revelation from God was a consequence of Joseph following not merely the letter of th Law, but also the spirit of the Mosaic Law. This is evident when he decided to divorce Mary privately, and not publicly. Such compassionate treatment of his fiancée, reveals the heart of a man close to the heart of God. As Solomon tells us, “He who pursues righteousness and kindness, will find life and honor” (Proverbs 21:21).

The meaning of the angel’s message to Joseph was more than a bare declaration of the Messiah’s birth. There is an underlying warning that to divorce Mary, even discreetly, would be a violation of the Law of Moses. After all, his bride-to-be was, in fact, still a virgin, even though the Messiah was in her womb. This divine message was necessary not only to strengthen Joseph’s confidence in his beloved, but also to uphold the justice of God.

In Joseph we see a man who was willing to obey the commandment of the Lord in whatever form it came to him. To do this, it was necessary for him to look beyond social customs and religious traditions in order that he might fulfill the unique calling that the Almighty had placed upon his life. That the heavenly vision came in the form of a dream, made it no less real or compelling. This divine communication provided a strong foundation upon which Joseph could rely as a husband and a father when facing trials and difficulties.

In Joseph’s pilgrimage upon the earth, as in ours, we are called upon to recognize a reality greater than that which motivates and sustains an unbelieving world. This is only possible if “we fix our eyes not on what is seen, but on what is unseen…for what is unseen is eternal” (2 Corinthians 4:18).

There is some disagreement among biblical commentators as to whether or not Mary and Joseph were actually married or still engaged when they made the trip to Bethlehem. In either case, they knew that Mary would soon give birth and that the Messiah was to be born in Bethlehem, Joseph’s ancestral home (Micah 5:2).

After receiving a visit from the wise men, Joseph was warned in a dream to flee from his home in Nazareth into Egypt to escape the wrath of King Herod. There was a large Jewish community in Egypt at that time, and it is likely that these refugees found shelter and support among friends or extended family there.

It is significant that God chose the means of angelic visitations in the form of dreams, rather than conscious contact, to communicate the Divine will to Joseph. This the Lord did four times in all (Matthew 1:20, 2:13, 2:19, and 2:22). Dreams are a communication from the subconscious, and in this case, reflect Joseph’s mental struggles and anguish of heart in attempting to understand his role in God’s plan of redemption for mankind, as well as the practical concern of how to protect and provide for his family. 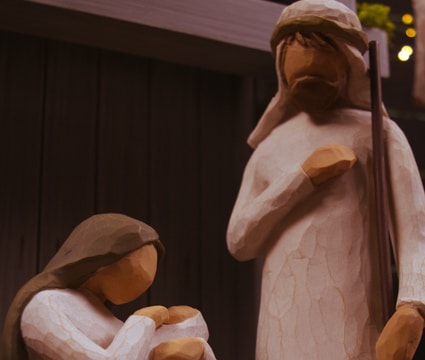 Biblical scholars place the death of Herod the Great in 4 B.C. It is unclear how old Jesus was at the time of the magi’s visit. The length of time that the holy family stayed in Egypt could have been just a few months, or over a year.

Additional references to the earthly father of Jesus in the New Testament are few. We later find Mary and Joseph in the temple, offering a sacrifice of poverty–a pair of turtledoves–as they dedicate their firstborn son to the Lord.

Next we are told that Mary and Joseph looked for the boy Jesus with sorrow, as he stayed behind at the temple to ask questions of the rabbis and teachers of the law (Luke 2:48). There is some question as to whether or not Joseph was still living at the time of Christ’s public ministry. It seems certain that by the time of Jesus’ death, Joseph was no longer living, since Jesus, on the cross, asked the Apostle John to care for Mary.

The fact that Jesus chose the term “Father,” to address and explain the first person of the Trinity, is significant. Certainly the word father had been used in the Old Testament to refer to the God of Israel (l Chronicles 29:10, Isaiah 9:6). Yet, as far as describing the relationship between the first and second person of the Trinity, the language of Father and Son is conspicuously absent, unless it might be inferred from Psalm 2. In Psalm 110:1, for example, the first two members of the Trinity are referred to as “Lord….. Lord.” While in Daniel 7:13, the pairing is “Son of Man…Ancient of Days.”

There is no way to know to what extent the man Joseph, in his role of earthly father to Jesus, shaped and informed the developing consciousness and self-awareness of Jesus as the Son of God, if at all. Yet we can have no doubt through the testimony of Scripture, that this righteous Son of David provided a godly example not only to Jesus, but to his brothers and sisters as well.

Mr. Paul Flodquist is a member of the Covenant of Grace OPC in Oxnard, California. He has taught Systematic Theology part time at a local Bible College.