18 Now the birth of Jesus Christ was as follows: After His mother Mary was betrothed to Joseph, before they came together, she was found with child of the Holy Spirit. 19 Then Joseph her husband, being a just man, and not wanting to make her a public example, was minded to put her away secretly. 20 But while he thought about these things, behold, an angel of the Lord appeared to him in a dream, saying, “Joseph, son of David, do not be afraid to take to you Mary your wife, for that which is conceived in her is of the Holy Spirit. 21 And she will bring forth a Son, and you shall call His name Jesus, for He will save His people from their sins.” 22 So all this was done that it might be fulfilled which was spoken by the Lord through the prophet, saying: “Behold, the virgin shall be with child, and bear a Son, and they shall call His name Immanuel,” which is translated, “God with us.” 24 Then Joseph, being aroused from sleep, did as the angel of the Lord commanded him and took to him his wife, 25 and did not know her till she had brought forth her firstborn Son. And he called His name Jesus. (Matthew 1:18–25)

As Reformed people, we are not comfortable with that question. Our tradition stresses strongly that all men are guilty before God’s law. It is part of our theological consciousness that no true believer should claim to be righteous before the law of God. In fact, in accordance with Holy Scripture, our Reformed piety would claim that even if we fail with respect to just one commandment, we would be guilty of sinning against the entire law (James 2:10). So to even suggest, or to even claim that the Bible would ever present a person righteous with respect to the conditions of the law smells of salvation by works.

Although you may feel uncomfortable with my question, I ask you to permit the Holy Spirit to challenge you with Matthew’s presentation of Joseph in Christ’s birth narrative (1:18–25). In Matthew’s presentation of Joseph is the presentation of the gospel! By directing our attention to Joseph, I am not attempting in any way to overlook the importance of Christ’s birth. Indeed, Matthew 1:18–25 is the climax of Matthew’s genealogy concerning the birth of Jesus Christ, the Son of David, the Son of Abraham (1:1, 16–17). He was born to Mary, the wife of Joseph. His birth was a fulfillment of the prophecy in Isaiah 7:14; this prophetic fulfillment is the high point of the genealogy: “Behold, the virgin shall be with child, and bear a Son, and they shall call His name Immanuel, which is translated, ‘God with us’” (Matthew 1:23). In this verse, the focus and theme of Matthew’s gospel is revealed. Immanuel has arrived in history; God is now present with His church, never to depart from her (Matthew 1:23; 28:20).

Let me begin with the problem that surrounds the term: “betrothed” (vs. 18 NKJ), “engaged [pledged] to be married” (NIV), or “betrothed” meaning “engaged” (ASV) “espoused” (KJV). Our English translation does not do justice to what many scholars believe to be the Jewish custom of marriage at the time of the New Testament. At that time, a marriage which was agreed upon by parents usually came immediately after the age of puberty. A formal contract would be exchanged before witnesses of both families. When the contract was issued, the male was viewed as the “husband” of his future bride, e.g. Joseph was viewed as the “husband” of Mary, although they were not presently living with each other (1:19).

Specifically, in Jewish tradition, Mary and Joseph are married by virtue of the formal contract, but there was a customary interim period in which the couple must refrain from living with each other. Hence, the marriage union was not yet consummated; they had not yet come together as one flesh. For this reason, the phrase “before they came together” appears in the text (1:18). In other words, they were married to each other by legal document, but they had not yet taken up residence with each other. In this situation, Mary was found to be with child (1:18).

As the Bible begins to note Joseph’s response, the Holy Spirit carefully describes his character as a “just man” (1:19). The Greek word dikaios appears in the text here. It can be translated “just” or “righteous.” It is the same word used in relationship to justification, e.g. “The just [righteous] shall live by faith” (Romans 1:17; cf. Romans 3:26; Galatians 3:11) or, its verb form “Being justified by faith, we have peace with God” (Romans 5:1). Hence, we must not miss that the Holy Spirit is presenting Joseph as a “righteous” and “just” man.

After the description of Joseph’s character, the text proceeds to portray Joseph’s reaction to the appearance of the scandal. As a righteous man, he does not want to make Mary “a public example” (1:19). He realizes that the public will learn that Mary is with child, and that she will endure public embarrassment. Joseph tries to control the public humiliation, mockery, and gossip of the presumed scandal. His desire is not to add to her humiliation. So it was his wish to give her a “private divorce” which would nullify their marriage contract in secret (1:19).

Does God’s law permit such action by Joseph? In Deuteronomy, we are told that the “married virgin,” as well as the man who engages in fornication with her, are both to be “stoned to death” (22:23–24). But Joseph has a problem; the man supposedly involved has not been captured, nor are their any witnesses to the incident. For this reason, Joseph is not in the position to bring complete judgment which the law requires (Deuteronomy 22).

Joseph proceeds in a different direction to solve his dilemma. In respect to the law, Joseph has another option. On the basis of Deuteronomy 24:1, he can give her a “bill of divorce” on the grounds of the sin of uncleanness—fornication. As a righteous man, Joseph chooses to exercise this choice in full compliance to God’s law. He will act kindly, however, with Mary, so that he does not publicly degrade her since he does not have the man whom he thinks acted in this sin. He will not allow Mary to be made a “public example” when the supposed sinful man has not been brought to justice.

Let us return to my opening question: does the Bible ever present a person as righteous with respect to the conditions of the law of God? Yes. In verses 18 and 19, Joseph is presented as a just man with respect to what the law required. But does this mean that the law saves or that Joseph is saved through his compliance to the law? By no means! It is not the purpose of Scripture to present Joseph as one who is justified by the works of law since the Scripture teaches that “through the works of the law no man will be justified” (Galatians 2:16).

Joseph is being presented to us with the same teaching concerning justification from Abraham to Paul; the believer is justified by faith. Joseph embraces the law as a man of faith! Biblical revelation presents Joseph as one who lives by faith; he is devoted faithfully to the statues of God. That is how men of faith live!

In his dilemma with Mary’s situation, however, Joseph will discover how one comes up short if one isolates the law as a revealer of truth. In other words, Joseph will come to understand that what the gospel reveals, the law, in isolation, could not reveal. He will learn how in redemptive-history, Christ is the end of the law—that the law has given way to its fulfilled condition in the person of Christ as His righteousness is imputed to those who believe (Romans 10:4). Moreover, he comes to understand that as a “righteous man,” he is only “righteous” if he truly confesses that Jesus is the Christ! Only the revelation from God and the belief in Jesus as Savior will resolve Joseph’s situation.

As Joseph follows the law, the law could not reveal the truth about Mary’s condition. Rather, God reveals the truth of Mary’s condition through an angel! God reveals through an angel that Mary is to be Joseph’s wife and she is with child by the power of the Holy Spirit (1:20). Furthermore, the angel tells Joseph that he is to name the child Jesus: “for He will save His people from their sins” (1:21).

A Man Made Just

We need to grasp the significance of this revelation to Joseph. By the sovereign revelation and grace of God, Joseph’s lips confess the coming salvation—that Jesus saves His people from their sin! More directly, in terms of the drama depicted in the text, Joseph’s resolution is not found in the law, but in the gospel. Indeed, God’s law is to be understood as good throughout Scripture, but the law did not reveal the truth of Mary’s condition to Joseph. God had to personally intervene. He intervenes with the voice of truth from the angel, but even more powerfully than that, He resolves the situation with the birth of His Son to Mary.

In the fullness of time, God sent His Son to declare the innocence of Mary with respect to the law, and to justify the faith of Joseph. There is only one way that Joseph and Mary can move from law to gospel and that is through the coming of Jesus into the world! He must come into their world since the law in itself cannot save them! 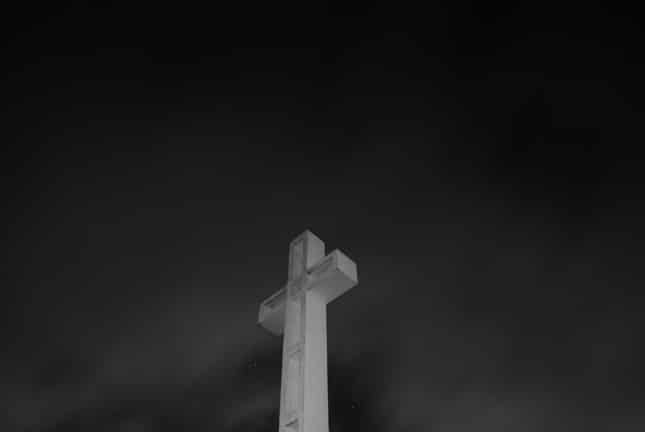 Joseph gives the name “Jesus” to the child, not Mary (1:21, 25). In Joseph, the people of God are being taught that they are justified in the name of Jesus, not in the works of the law. Moreover, in our text, God enacts the essence of the entire history of redemption in Joseph; in him we are moving from the law to Christ, from the old covenant to the new covenant, from an era that fades to an era that is full of glory.

In the revelation of Christ’s name Joseph finds his wife sinless before the law (II Corinthians 3:6: “the letter kills, but the Spirit gives life”). What a message for the church of Jesus Christ. In the same birth narrative of the coming of Immanuel (“God with us”) is a very personal and practical story about us. We see ourselves in Joseph; he is our story concerning how we are saved in Christ! In Joseph we see that the law was his “tutor to bring him to Christ, that he might be justified by faith” (Galatians 3:24). Indeed, in Joseph, we see how the “righteous live by faith;” they live by every word that proceeds from the mouth of God. And such a saving faith comes only through the power of Immanuel’s Spirit.