When we remember our debt to the Reformation we usually do not think of going back 600 years to a time more than a century before Martin Luther. Yet in the fragmentary records of the half-forgotten life of John Wyclif there is an anticipation of Reformation teaching that deserves much more attention than it usually receives.

It is Gotthard Lechler who is credited with having written the first scholarly biography of Wyclif in 1873 and for the first time setting forth most fully his teachings. From his work we learn that the famous Oxford schoolman saw the need of church reform throughout his career, but that in middle life he was concerned especially about the ecclesiastical and political aspects of that need. He saw the evils of the pope’s usurpation of the rights of the English king and his spoiling of the country. He saw the secularization of the church, the buying and selling of its offices, and the corrupt morals of its clergy, and he tried to correct these evils by political attacks and teachings. Yet this proved to be the wrong road out of the church’s troubles, Lechler points out, for it dealt with the life of the church but not its doctrine. 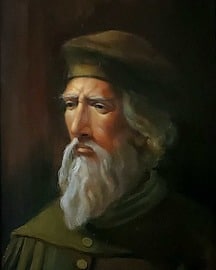 BACK TO THE SCRIPTURES

In later life Wyclif probed deeper into the basic, religious trouble of the church. Then his first step was to assert “the fundamental principle that the Holy Scripture alone is infallibly true and an absolute standard of truth.” “No one for centuries had so clearly recognized this truth and established and defended it with such emphasis as Wyc1if.”1 On the same subject, Herbert Workman in his standard biography of the reformer points out, “No one can dl’ny his constant appeal to the Scriptures as the primary and absolute authority.” This began early in his career and it deepened. Although others shared his general view, he differed from them in distinguishing between the Bible and church teaching, just as Luther did over a century later. He said, “Neither the testimony of Augustine nor Jerome, nor any other saint should be accepted except in so far as it was based upon the Scripture.” “Scripture apart from Canon Law is sufficient for the rule of the Church. By it any novelty must be tested. To the current scorn of the Bible of which he complains, Wyclif traces the evils in the Church.” He deplores the fact “that in his youth through academic pride he had tended in the same direction.” “He laments the exclusion of Bible study from religious life and the reluctance of officials to spread the knowledge thereof among the people.” Although he was not alone in his appeal to the authority of the Scriptures, he “added a new doctrine, the right of every man…to examine the Bible for himself.” “The Holy Ghost teaches us the meaning of the Scripture as Christ opened its sense to his apostles.” Such Bible knowledge is necessary for salvation, for “to be ignorant of the Scriptures is to be ignorant of Christ.” “All the evidence shows that Wyclif’s plea for the reading of the Bible by the laity was a revolution, not an extension of an existing practice.”2

WORKING WITH THE SCRIPTURES

The practical result of this growing conviction concerning the crucial role of the Bible is seen in the Wyclif translation of the Bible. Whether his part in tile translation was large or not, his convictions and leadership undoubtedly had a great deal to do with the production of this work. The old Anglo-Saxon translations had become unintelligible, and his was the first translation of the whole Scripture or any considerable part of it done in the Middle as distinct from the Early English. The lack of printing at this time kept the production of this new translation from becoming as revolutionary an event as it might have been if it had occurred later.3

In addition to translating the Bible and producing English tracts to spread the knowledge of it, Wyclif turned his attention to the training of preachers. The failure of the church to preach and teach the gospel had evidently contributed largely to reduce it to its sorry plight. and Wyclif called for preachers in each parish. This preaching must be based on the Scriptures. The Word was to be the spiritual power of the church to restore life to it.4

“Wyclif has made it clear that in his day three sorts of sermons were known: the string of anecdotes. the scholastic discussion, and the practical exposition of the Word. The first two he condemned. To deliver moral exhortations based on the Bible appeared to him the most useful function of a priest. Yet he was ready to confess that the anecdotal sermon was the most popular, as he complained that it was the most usual. ‘To sum men,’ he said, ‘it pleaseth for to tell the tatis that they fynden in seintes lyves. or withouten holi writt; and sich thing pleasith ofte more tho people.’”5

Is there a more appropriate or more urgently needed lesson in the church of today than this one which comes to it across six centuries from the “morning-star of the reformation”?