There has been and there is much difference of opinion about the ecumenical ideas of John Calvin. He has been highly praised as a forerunner of the idea of the World Council of Churches (Dr. Nyenhuis); and he has been heavily attacked as a man of terrible intolerance (Stefan Zweig, Favre-Dorsaz). A sou n d judgment can be given only when we use all the facts which we have at our disposal and when we try to transport ourselves mentally to the times in which Calvin lived.

We don’t exaggerate when we speak of Calvin, as compared to Zwingli and Luther, as the one international Reformer. Theoretically he founded the idea of the unity of the church in his Institutes, and practically he struggled all his life to make this idea a reality in the various Reformation churches of his time. Though he distinguishes between the visible and the invisible church, in both cases he stresses the necessity of unity.

When he was exiled from Geneva, he forbade his adherents in the city to separate themselves fro III the church. He supported Cranmer’s idea to establish one church of the Reformation through a godly synod, and by his incessant labors the little city of Geneva became a center of the Protestant world of his time. He came to an agreement with Zwingli’s successor, Bullinger (Consensus Tigurinus), and thereby reduced the number of Protestant fronts fro m three to two. He struggled for a better understanding with the Lutherans and honored Luther as his spiritual father. He himself was the father of the Reformed churches, not only of Switzerland and France, but of the whole of Europe.

To keep the unity of the church, Calvin made use of tolerance in various circumstances. He did not require of all Christians the same insight in all questions, neither did he require of all churches the same height of spiritual life in all circumstances. Melanchthon, who differed with him on some dogmatic points, and Bucer, who was much too flexible in his eyes, remained his friends until the end of their lives. In the church of England, he approved for the time being the office of a bishop and some ceremonies which he did not tolerate in the church of Geneva. To the king of Poland he proposed that an archbishop should remain in that country to occupy the first place in the synods between his colleagues and brethren and that there should be provincial bishops. The limit to this tolerance is to be found in the acceptance of the authority of the Word of God. 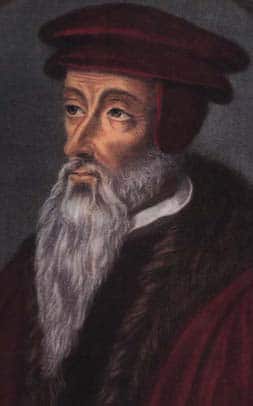 Calvin spoke sometimes of three and sometimes of two marks of the true church, but fundamentally he acknowledged only one mark of the church, viz., the pure administration of the Word of God. Therefore, he always was opposed Roman Catholicism, mystical anabaptism, and rationalism. His great objection against Roman Catholicism was that this church had forsaken the only authority of the Word of God; all its errors are to be reduced to this fundamental error. He had the same objection against Mystics and Anabaptists: they separate the Word from the Spirit, and they pass off the works of their own spirit for ideas of the Holy Spirit. Against the Italian rationalists of his time, he objected strenuously that they made all things subject to their human reason, and did not subject themselves as children to the Word of God.

The Word of God is interpreted in various ways, and Calvin accepts the fact that sometimes the interpretations of godly men differ, but he wants agreement in the important points of doctrine. These important points of doctrine he finds summarized in the confessions of faith of the several churches. These confessions are the symbols or forms of unity of the churches. Calvin does not play with the liberal idea of an “inward freedom with the confessions.” He wants strict observance of their contents. Therefore, the limits of the ecumenical relations which he tried to settle between the churches of the Reformation are to be found in obedience or disobedience to the Word of God, and the expression of that obedience or disobedience in the confessions.

Calvin cannot be regarded as a herald of the modern ecumenical movement; on the contrary, it is more than likely that he would have opposed with all his power such a movement, which tries to give liberalism a legal place in the church. He would have promoted an ecumenical movement which, accepting the Holy Scriptures as the infallible Word of God, would stand on a sound doctrinal basis.