At the end of Lord’s Day Six, the Heidelberg Catechism asks a very imposing question: “How do you know all this?” How do you know Jesus is the One to whom we must turn for salvation? The answer seems as simple as the childhood song, “The Bible tells me so!”

The Law and The Sacrifice

In ancient Israel, the law and the sacrifices went hand in hand. When the Law was given to Moses, the lamb was given also. When Moses was chosen as the Lawgiver, Aaron was also chosen to be the High Priest. God had arranged it that way so that when man sinned, he had a means of atonement by which his guilt could be cancelled. That was through the sacrifice. 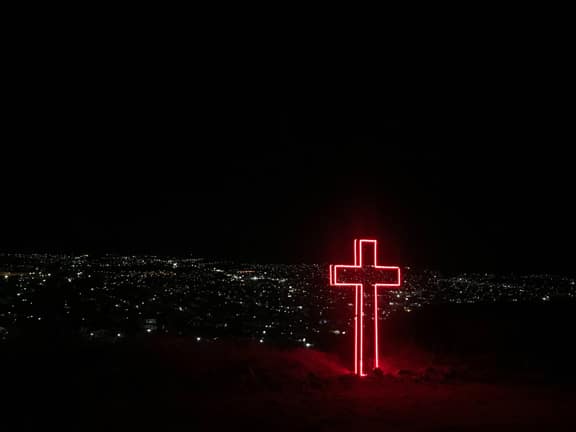 God demanded that these sacrifices take place in the Old Testament in order to teach the people over and over again that sin means death. Either the death of the one who had sinned or the death of an innocent substitute.

We see this already happening in Genesis 3. Adam and Eve had sinned against God. God came into the garden, confronted our first parents, and pronounced his judgment upon them and the serpent. Then what did God do? In Genesis 3:21 God makes garments of skin for Adam and his wife.

Through the centuries God went to great lengths to teach this spiritual truth to His people: SIN MEANS DEATH. God taught His people this truth so that we would understand the purpose of Christ’s death on the cross.

Christ not only fulfilled the Law and all the ceremonial sacrifices of the Old Testament, He also fulfilled the prophets. But Christ did this in a different way.

When we speak of prophesy, we refer to direct statements made in the Old Testament about the One who was going to deliver the children of God and redeem them from their oppression to Satan. Statements in the Old Testament told us who the Messiah would be; where He would be born; what He would do; and how He would suffer. They would also tell us what the ultimate purpose of His suffering would be.

Beginning already at Paradise, God began to reveal the good news of the Mediator. Genesis 3:15 is the first prophesy in the Bible concerning Jesus Christ. It is interesting to notice that the first prophesy of a Savior was not given to Adam and Eve, nor was it given to any of the Patriarchs. In fact, it wasn’t even given to a human being. It is given to the serpent. The first prophesy declares that One born of a woman would be victorious over him: “And I will put emnity between you and the woman, and between your seed and her seed; He shall bruise you on the head, and you will bruise Him on the heel.”

That first prophesy made by God was fulfilled at the cross of Christ where Satan succeeded in bringing about the death of Jesus, the Son of Man. Certainly Satan had bruised the heel of the woman’s seed. At the same time, Jesus, the Son of God decisively defeats Satan and all his power, thereby crushing his head.

Another prophesy appears in Genesis 22. Abraham was obedient to God in his willingness to sacrifice his promised son, Isaac, at Mount Moriah. This event is a portrayal of what God would one day do with His promised Son.

Abraham was called upon to offer his son. We read that when the actual time came for the sacrifice, God stopped Abraham. When the time came for God to offer His Son, no one stopped Him. The Son of God really died. He tasted death for all those who call upon His name and trust in Him for their salvation.

God gave to Abraham the same answer that Abraham gave his son when Isaac asked what they would sacrifice. Isaac had asked his father, “Behold, the fire and the wood, but where is the lamb for the burnt offering?” Abraham answered his son, “God will provide for Himself the lamb for the burnt offering. (Genesis 22:7, 8). For Abraham and Isaac, it was a ram in the thicket; for us the Lord provided a sacrifice in His only Son, Jesus Christ. Over and over again on the pages of the Old Testament and in the history of Israel we hear the words, “The Lord will provide” as they are echoed in Jehovah’s promises of a Messiah.

This is important because, as you recall, in the beginning of the Heidelberg Catechism we were told of how lost we are in our sin and misery. The Catechism went on to explain that the only escape from that sin and misery was to make peace with God. That can only be done if your sins are paid for through the perfect sacrifice made on your behalf.

The blood of a perfect sacrifice has to be shed for you. Death has to take place. Like Adam and Eve, we must apply that death to ourselves. Adam and Eve had to do more than just watch the animal die; they had to take upon themselves his bloody skin. So also, we cannot just read about the death of Christ, we have to take His sacrifice upon ourselves. We must clothe ourselves with His righteousness.

Lord’s Day Six explains what kind of death must take place. It tells us that only one who is truly human, truly righteous, and truly God can pay for our sins by giving up His life for us. But it goes a step beyond that, as well. Lord’s Day six tells us that there has been such a sacrifice made! There was One who, years ago, died on the cross of Calvary who is a Savior, a Mediator. There is One who fulfills the demands set by God already in Genesis 3 and already promised in Genesis 3, and that One is Jesus Christ.

It was for our sake that the Holy Scriptures were written. So that we might know that the innocent Lamb of God poured out His blood for us, permitted His body to be pierced, in order to redeem us from eternal death through the forgiveness of our sins. The whole Bible is the rescue mission of God. It begins by showing our roots in Paradise and how, after the Fall, God immediately offered His grace to our fallen parents.

The Bible is not God’s announced judgment of condemnation upon the world, it is God’s electing some out of their reprobate state. The good news of the Bible is that it tells us about God rescuing an already fallen people. The whole Bible points to the once for all sacrifice of Christ upon the cross. He is the key to understanding the Bible. He is also the key to understanding life.