The meaning of this day, the most significant day in history, depends on the significance of Christ’s cry, “It is Finished!” In the sixth word from the cross we find confession of messianic consciousness: we hear the voice of the witness, the sigh of the sufferer and the shout of the victor.

IT IS FINISHED! It is the voice of the witness, our Chief Prophet!

For, said Jesus, “I came not to do mine own will, but the will of him that sent me.” And, “to this end was I born, and for this cause came I into the world, that I should bear witness unto the truth.”

In the first recorded statement of the Messiah this consciousness is strong. “Wist ye not that I must be about my Father’s business?” And to the disciples who marvel at his casual attitude toward food: “My meat is to do the will of him that sent me, and to finish his work.” And if we should ask what that work consists of, the answer is unmistakable: “I came to reveal the Father,” and, “I speak to the world those things which I have heard of him….as my Father hath taught me, I speak these things.”

This is he of whom Moses prophesied: “I will raise them up a prophet from among their brethren, like unto me, and will put my words in his mouth; and he shall speak unto them all that I shall command him.” Christ, then, was the Prophet, the Word, the Truth who of God is made unto us wisdom. In these last days God hath spoken through his Son; therefore, let us give the more earnest heed to things that have been spoken, for It Is Finished! 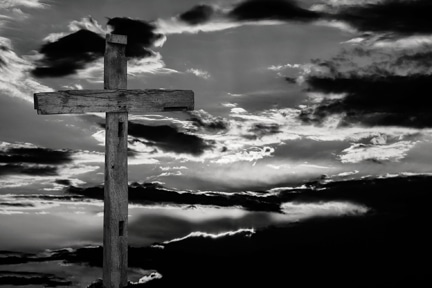 IT IS FINISHED! Hear the sigh of the sufferer, He is our Only Priest!

Christ came to suffer and die. “I have a baptism to be baptized with and how am I straitened till it be accomplished,” for, “without the shedding of blood there is no remission,” He is the Mediator of the New Testament, whose blood speaketh better things than the blood of Abel, “Who now once, in the end of the world hath appeared to put away sin by the sacrifice of himself.”

“O my father, if it be possible…not as I will, but as thou wilt.” “By the which will we are sanctified through the offering of the body of Jesus Christ, once for all.” Yet, “in the days of his flesh…learned he obedience by the things which he suffered” that he might become “the author of eternal salvation unto all them that obey him.”

Surely he hath borne our griefs and counted our sorrows.

But he was wounded for our transgressions,

He was bruised for our iniquities;

The chastisement of our peace was upon him,

And with his stripes we are healed.

The last bitter dreg of the cup had been quaffed—“MY GOD, MY GOD, WHY HAST THOU FORSAKEN ME?” God made him to be sin for us, so that he bore in his own body our sins on the tree, that we, being dead to sins, should live unto righteousness—“with his stripes we were healed.” Having finished the course he became both author and finisher of our faith.

Truly, It Is Finished! Praise his name! Hallelujah, what a Savior!

IT IS FINISHED! Hear the shout of the victor! He is our Eternal King!

For he is the seed of the woman that came to crush the serpent’s head. He is the seed of Abraham in whom all the nations of the earth would be blessed. This is the son of David, “and the Lord shall give unto him the throne of his father David; and he shall reign over the house of Jacob forever; and of his kingdom there shall be no end.” “For unto us a child is born…and the government shall be upon his shoulder….And his name shall be called…the mighty God, the prince of peace.”

He seemed to suffer defeat at the hands of his enemies, but he came to destroy the works of the devil. No man took from him his life, but he laid it down for his sheep, and no man can snatch them out of his hand. In face of the impending judgment of the cross and the wrath of God he cried: “Now is the judgment of this world, now is the prince of this world cast out. And I, if I be lifted up from the earth, will draw all men unto me.” He saw the travail of his soul and was satisfied. His gospel is the power of God unto salvation to everyone that believeth…to the Jew first, but also to the Greek. For Christ is the wisdom of God and the power of God. For he is our peace! And every one that is in Christ is a new creature. There is, therefore, now no condemnation for them that are in Christ Jesus. Having been justified by faith we have peace with God. Having purged us from our sins he sat down on the right hand of God. He now rules over the world, for God hath given to him a name above every name, that at the name of Jesus every knee should bow, and every tongue confess him to the glory of God the Father.

For, IT IS FINISHED! Bless the Lord, O my soul, and all that is within me bless his holy name! – HENRY R. VAN TIL