“And So All Israel Shall Be Saved.”

1. THE WRONG VIEW OF THIS PASSAGE

We may begin by saying that our ideas on this subject can be found in much fuller form in our little book entitled, “And So All Israel Shall Be Saved.” It is now out of print; so please do not write us about it. What we give here in this Outline is, however, a greatly condensed summary of some of the leading ideas of the booklet. We add that nothing that has been written on the subject either in our own circles or by those outside of our circles has caused us to change our views on this subject.

The wrong view. as we see it, a view which is also rather popular in our own circles. is the following: In bringing the gospel. God is dealing with two groups. The one is the Gentiles, the other is the Jews. Now, for a long time the Lord deals especially, though not exclusively, with the Gentiles. There will come a time, however, when the very last elect Gentile will have been brought into the fold. Then God will say, “Stop! No more Gentiles will be converted from now on.” But then God begins to deal with the Jews. The result will be that just before Jesus returns “the great mass” of Jews wiII be converted, large numbers of them”; one might even say, “the Jews as a nation.” And that will then be a definite sign that Jesus is about to return. 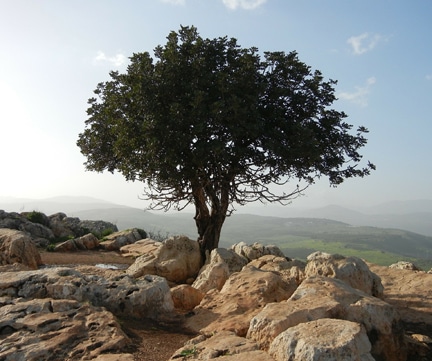 Our objections to this explanation are as follows:

a. It is thoroughly contrary to the entire context of Romans 11. That context nowhere speaks about national salvation or even about mass-salvation. On the contrary, it speaks about mass-hardening and remnant-salvation.

b. Our Lord nowhere predicted a national conversion of the Jews. Jesus loved the Jews. He himself was a son of Abraham, Isaac, Jacob, and Judah. If the Jews are going to be converted in large masses as a sign of the end, one would expect Jesus to have said so, especially when the disciples asked him to tell them about the sign of his coming and of the end of the world. But he said the very opposite. He indicated everywhere that the privileges which once belonged to the ancient covenant-people would be transferred to a new nation (namely, the church). gathered out of Jews and Gentiles. ( Read Luke 19:43, 44; also Matthew 8:11, 12; 21:32.)

c. According to the uniform teaching of Paul, special promises or privileges for this or for that national or racial group—say, the Jews, or the Dutch, or the Americans—do not exist in this new dispensation. (Read for yourself Romans 10: 12, 13; Galatians 3:28; Ephesians 2:14).

d. God does not reward disobedience!

What the right view is the context—so it seems to us—makes very dear. Paul in this chapter discusses the question how the promises of God to Israel can be reconciled with the rejection of the greater part of Israel (see verse 1). The apostle answers in effect: “You must remember that even during the old dispensation these promises were intended to be realized only in the lives of true believers. And that is true even today, that is, during the new dispensation.” He says, “God did not cast off his people which he foreknew (verse 2) the seven thousand during Elijah’s time (verse 4),…the remnant according to the election of grace” (verse 5), One might have expected God to punish the Jews by wiping them out completely, or by sending upon all of them a hardening. The sin of nailing the Messiah to the cross certainly deserved that much. But the great mystery (see verse 25) is this, that this hardening is never complete. In each generation God gathers out from among the Jews a remnant that will be saved, certain “branches” that are grafted back into their own olive tree. Note, however: never more than certain branches, never more than a remnant! Now, all these remnants put together constitute ALL ISRAEL. AIongside of the process whereby the fullness (that is, the full number of elect) of the Gentiles is brought in, occurs also the process whereby ALL ISRAEL (all the elect from among the Jews) is saved. SO—that is, remnant-wise, as far as God’s saving activity is concerned; faith-wise, as far as man is concerned (see verse 23)—ALL ISRAEL will be saved. SO, and in no other way; hence, flat as a nation, but as a collection of remnants throughout the ages; not by continuing in unbelief, but by accepting Christ through living faith. In order to impart that salvation to ALL ISRAEL, Jesus came into the world (see verses 26 and 27).

I shall close this discussion by quoting from the works of three authors for whose convictions you and I should have the highest respect.

Dr. Bavinck, the author of that monumental work, Gereformeerde Dogmatiek, says, “Accordingly, the term ALL ISRAEL does not indicate the people of Israel which will be converted on a large scale in the end-time; neither does it refer to the church out of Jews and Gentiles; but it is the ‘pleroma’ (fulness) which, in the course of centuries, is gathered out of Israel. It is Paul’s prediction that as a people Israel will continue to exist alongside of the Gentiles; that it will not be wiped out or disappear from the earth; and that it will remain to the end of the ages, will contribute its ‘pleroma’ to the kingdom of God just as will the Gentiles, and will retain its peculiar task and position with respect to that kingdom.”

And Dr. S. Volbeda successfully defended the thesis: “By the term ALL ISRAEL in Romans 11:26a, we must understand the total number of the elect out of Israel.”

We are in thorough agreement with Bavinck, Berkhof, and Volbeda.

2. Show that this view it wrong.

3. What does the passage actually mean?

4. What does the word SO mean here?

1. In which sense are the Jews of today an indication both of the goodness and of the severity of God (Romans 11:22)?

2. In which sense is the truth here revealed an incentive to missionary work among the Jews?

5. What practical lesson can we draw for our own hearts and lives from God’s dealings with the Jews?