1. THERE ARE THOSE WHO BELIEVE THAT TH ER.E IS SOME KIND OF DIRECT CONTACT, EITHER FROM ONE SIDE OR FROM BOTH SIDES

Do the spirits of the departed ones see us? Can they get into contact with us? Are we able to contact them?

Well, what about Margaret and Kate Fox, respectively fifteen and twelve years of age when it happened? What happened? Let their mother tell the story of what presumably occurred March 30 of the year 1848:

“The noises were heard in all parts of the house…We heard footsteps in the pantry and walking downstairs. We could not rest, and then I concluded that the house was haunted by some unhappy, restless spirit.” On Friday night, March 31, the mystery repeated itself. Mrs. Fox continues: “My youngest child Cathie said: ‘Mr. Splitfoot, do as I do,’” clapping her hands. The sounds instantly followed her with the same number of raps….Then Margaret said in sport: ‘Now do as I do. Count one, two, three, four,’ striking the one hand against the other at the same time; and the raps came as before. She was afraid to repeat them.’”—According to Spiritualism, then, there is such a thing as direct contact between the departed ones and those still dwelling on earth.

b. THE ROMAN CATHOLICS

As is well-known, they venerate “the saints” in heaven, and crave their intercession; saying for example, “Sancta Maria, ora pro nobis” (Holy Mary, pray for us). But are the saints in heaven actually able to hear these supplications? Among Roman Catholic divines opinions differ with respect to this point. According to some, the angels serve as intermediaries, informing the saints about the contents of the requests that arise from the earth. According to others, God tells the saints about such matters; or else the saints read these supplications in the mind of God. But still others believe that the spirits of the saints are able to move so quickly from place to place that they have no need of any special informers. This amounts to a kind of direct contact, therefore. 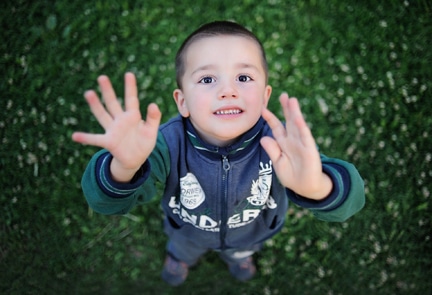 But, strange to say, even among soundly evangelical Protestants there are and have been those who accept some kind of direct contact, namely, in the sense that the departed ones who are now in heaven actually see us, and know, by means of this direct contact, what we are doing. One is somewhat surprised to find in the company of those who hold this view one who through his writings and his preaching has been, indeed, a great blessing to the church—none other than Rev. Clarence Edward Macartney. In a sermon on Hebrews 12:1ff. (the very passage that was read to you at the beginning of this lesson) he comments on the expression “we are compassed about with so great a cloud of witnesses,” as follows:

“That the dead observe us and are conscious of what we do in this life seems to be the reasonable inference from that great verse,” and again, “I have little doubt that they observe our life here in this world” (More Sermons From Life, p. 199, then 197).

Now, the Bible is completely opposed to this idea of any direct contact between the departed and those left behind.

As to THE SPIRITUALISTS:

Not only is communion between the two groups impossible but the attempt to effect it is strictly forbidden by the Lord, as you can easily see for yow-self by studying the passage which was read to you from Deuteronomy.

As to THE ROMAN CATHOLlCS:

Though Scripture everywhere urges us to intercede for one another (Romans 15:30; Ephesians 6:18, 19; Colossians 1: 2, 3; I Timothy 2:1, 2; etc.), and teaches us that God often sends deliverance in answer to such prayers of intercession ( Exodus 32:11–14; Numbers 14:13–20; cf. Genesis 18); nowhere does it in any way admonish us to ask for the intercession of those who have departed from this life, and nowhere does it imply that these departed ones are able to see and to hear what we are doing.

In fact, the very opposite is clearly implied. According to Scripture, those who have died are asleep with respect to the realm which they have left behind (as was pointed out in Outline XXXI). Whether your children are getting rich or are remaining poor is not known to them (Job 14:21). From their heavenly mansions neither Abraham nor Jacob is able to see or hear what is happening here below to his descendants (Is. 63:16; cf. also Ecclesiastes 9:2–10). It is hardly necessary to add that the veneration of the saints, which so easily deteriorates into actual adoration or worship, is a form of idolatry, strictly forbidden by Scripture.

As to SOME PROTESTANTS:

The explanation of Hebrews 12:1, 2 that is offered, among others, by Rev. Clarence Edward Macartney is incorrect. For the correct interpretation see H. Bavinck (Gereformeerde Dogmatiek, third edition, p. 689); and also the fine comments on this passage in popuIar commentaries on Hebrews by such men as J. C. Macaulay and W. H. Griffeth Thomas; and cf. Erich Sauer, In the Arena of Faith, p. 76. Says the latter:

“The expression ‘witness’ scarcely means that these men of God are spectators...of our present race and strife. It is not as though they watch from their exalted seats the battle in the arena here below. There are no scriptures which tell us that those who have left this earthly life take an active, conscious part in the things concerning the church militant. They [the faith-heroes of Hebrews 11] are characterized here as people who gave witness in their generation, and who, when we examine their life, are an example for us today of faith in action, winning victories in God…Although death has taken them away from this scene, their testimony remains. So that by this means and in this sense these heroes of faith of yesterday are, as it were, present with us today. In fact they compass us about and encourage us in the faith.”

1. What is the question discussed in this Outline?

2. What do the Spiritualists (or Spiritists) believe? Tell the story of the Fox family.

3. What is the Roman Catholic belief and practice with respect to this matter?

5. What does Scripture teach on this entire subject?

1. I have told you only the beginning of the Fox family story. Can you tell the rest of it? Does not the story of Saul and the Witch at Endor support the claims of the Spiritualists? See I Samuel 28.

3. In the Outline the point was established that there is no direct contact between those left behind and those who have departed from us. Is there any indirect contact, however? If so, prove this from the Bible.

4. If there be no direct contact between the militant and the triumphant church, in which sense is it true, nevertheless, that the two meet each other? See Hebrews 12:22–24; cf. verse 2 and Deuteronomy 18:15 and 18.

5. What is the best way to honor those who have gone home to be with the lord?