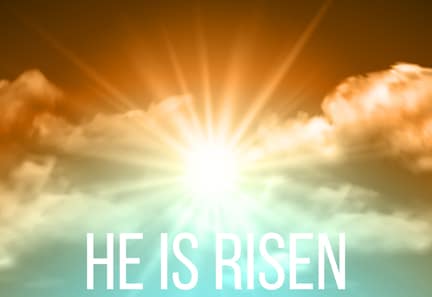 “IF…” That little word may frighten us. Does it imply that there is a possibility that Christ was not raised? Suppose for a moment that it could be true that Christ remained in Joseph’s tomb. We shudder to think what our predicament would be if Christ were still among the dead.

The word “if” in the verses quoted does not at all imply the possibility that Christ was not raised. For the moment Paul simply assumed that Christ had not been raised in order to show how impossible it is to hold to that assumption.

Years ago we read a story which depicted in a gripping manner the utter dismay which would overtake the true Church of God if it should appear that the report of Christ’s resurrection was a hoax. The story can bear repetition.

Many years ago, while the churches were· preparing for their Easter celebration, a sensational story appeared in the Saturday evening paper. Excavators in Palestine reported they had found a tablet with an inscription which could still be read without difficulty. It contained a confession by two men, who said they were disciples of Jesus, that they had stolen the body of Christ from his tomb in order to foster the belief that their Lord had risen from the dead. Becoming conscience smitten later on for having lied, they engraved their confession in stone and planted it somewhere in Jerusalem.

When this news article was read consternation filled many hearts. Some refused to believe it. They thought of the report of the Roman guards and of the testimonies to the resurrection by many who had seen the Lord alive after his death and entombment. But many others believed the report and were reminded of Paul’s words: “If Christ hath not been raised, your faith is vain; ye are yet in your sins.” They said: “We have been deceived; we can no longer believe the story of the resurrection of Jesus; our faith is vain.”

Great sorrow filled the hearts of those credulous Christians. Easter Sunday morning came but many churches remained closed. Their ministers said: “We cannot preach! we have no message of hope.” Tears streamed down the faces of those who stayed at home. They said: “We are still in our sins.” When dinner time came they could not eat. Nor could they read their Bibles, saying, “What’s the use?” On Monday morning some Christian schools opened their doors but others remained closed. “Why send our children to a Christian school if Jesus is dead?” the parents asked. Mission work ceased. The denominational printing presses stopped running.

On Monday morning another cablegram came from the same excavators in the near East. It read: “Our first report was an error. We just found sure proof that the tablets found last week were a forgery.” They had found a second, well-authenticated tablet which contained a deathbed confession by one of the enemies of Christianity that he and his fellow had been guilty of forgery and that their first report was a lie.

Great joy filled the hearts of God’s people when the good news came. They repeated the words of the apostles: “Christ is risen indeed.” They prayed once more. They read their Bibles and turned to the story of the resurrection appearances of Christ—to Mary Magdalene, to the other women, to Peter, to the ten apostles, to the eleven, to the 500 disciples in Galilee, and to Paul on the way to Damascus. Church doors were opened. Ministers preached the resurrection gospel with great animation and power. The choirs sang as they had never sung before. The following day all the pupils of the Christian schools were back in their seats.

This is just a piece of fiction, like the parables of Jesus; but it could have happened. The story was told to show that the true Christian religion is built on the open tomb of the risen Lord.

If Christ did not rise the third day, as he had promised, there would be no salvation for you and me. Then we are still in our sins—under eternal condemnation. Then there is no forgiveness because the sacrifice on the cross had been found wanting. If Christ remained in the grave, the Father is telling us that the Son failed to pay the full price of our redemption.

Jesus went to the cross and into the tomb to pay for our sins. He bore the iniquity of us all. Did God accept the ransom? Look at the tomb of Christ. There he comes, out of God’s prison! He was imprisoned for our debt but the moment he emerges we know that our debt was paid in full.

Thank God for the Easter story, for Easter services, for Easter music and song. It’s because of what Easter means that we have Christian homes, Christian fathers and mothers, Christian churches, and Christian schools. Mohammedanism, Buddhism, and all other false religions can exist even though their founders are dead. Christianity is the only saving religion because it is rooted in the living Christ.

Blessed Jesus! Thou hast died for us and now thou dost live for us, and in us, and through us. Receive us to thyself when our earthly task is done that we may live with thee forevermore!