To understand Isaiah 46:4 we must look at its context, and that means especially the first three verses of this chapter. These verses are often overlooked, it seems to me. Strange names are mentioned: Bel and Nebo, and strange things are said in connection with them. Unless some explanation can be found which makes these words meaningful, Scripture reading during family devotions, for example, might seem to be quite fruitless.

Looking at these four verses appearing at the beginning of Isaiah 46 we note a striking contrast between the first and the second pairs of verses. In the first pair the prophet pictures a desperate situation existing in the land of the Babylonians. Bel and Nebo, the false gods of the Babylonians, are in serious danger because the enemy is approaching to destroy the city, the temple, and the idols, too. Strong men rush in great numbers to the temple! Hurriedly the heavy images are wrenched loose from their bases. That is why “Bel boweth down” and “Nebo stoopeth.” Although held by many hands, these sizeable idols swing from side to side, dangerously leaning until they appear to be in imminent danger of destruction. Carefully and strenuously their bearers persist, however, until Bel and Nebo are finally loaded upon carriages, firmly fastened with strong cords, and the beasts of burden are brought forward to pull them.

These grotesque images are “made a load. a burden to the weary beast.”

At this point the prophet ridicules the poor heathen in their plight. Pointing his finger at the idols he cries, “They stoop, they bow down together; they could not deliver the burden” (which means that they could not even bear their own weight), “but themselves are gone into captivity” (bound and tied by many cords to the transporting vehicle, they are led about as veritable prisoners of those who are supposed to be their subjects).

Then the Lord himself begins to speak, and in the

light of verses 1, 2, we now understand much better his comforting message: “Hearken unto me, °house of Jacob, and all the remnant of the house of Israel, that have been borne by me from their birth, that have been carried from the womb.”

The heathen are always compelled to carry their gods upon their own backs and by their own vehicles, but God carries his people. Even in the land of Babylon, where the remnant of the house of Israel had to dwell as captives for so many years because of their sins, even there God did not forget his people. Even there he carried them: “and even to old age I am he,and even to hoar years will I carry you: I have made,and I will bear; yea, I will carry and will deliver.”

Ponder for a moment this endless goodness and this amazing care which God promises to those who are his!

From birth we have been carried by him, being borne on “the everlasting arms,” and all the way, even to our old age, will he sustain and support us.

Why do we ever fear? 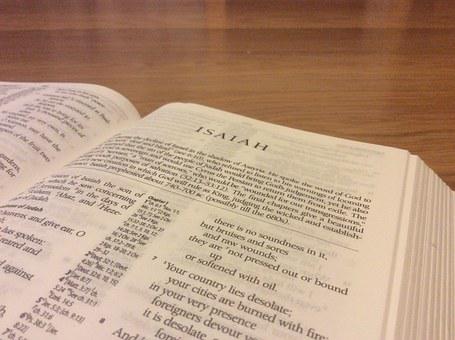