Probably nobody is more susceptible to hype than fishermen. For we fishermen are eternal optimists. Like gamblers, we are sure the next cast will net us a big one. Merely the picture of a fish pursuing a lure gets us excited.

When we fishermen read about some new lure, a finer line or a smoother reel, wild illusions seize our minds. Our hands can feel the pull of the fish, a fish of such size that it defies belief. We imagine our rod arched by its weight and the new lure protruding from the fish’s mouth. Ah, who can estimate what hype advertising does to fishermen?

But there lies our problem. If only we came home more often with fish the size of the hype we so easily swallow! Every time we fall for the hype we set ourselves up for disappointment when fish do not bite. Hype makes us become masters at concocting excuses for empty creels and buckets. Skunked or not, we cherish our illusions. Occasionally the catch is good, and we become even easier prey for the next promotional hype. 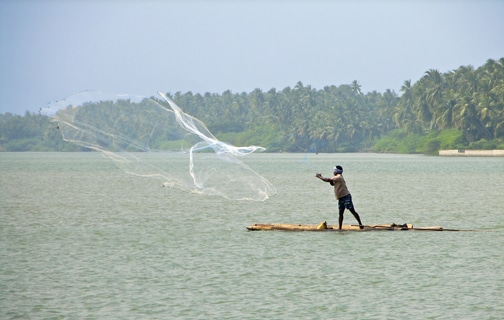 In mission and evangelism, promotional hype is almost as common as it is in fishing. During the past century we have witnessed one evangelistic hype after another. “Each one reach one.” “Key ‘73 … Grow your church!” “Reach the unreached.” And, most recently,

“Finish the job of evangelizing the world by AD 2000.”

Mission hype sounds pious. It also sells books, raises money, and inspires sermons. It can make hype artists famous. It misleads Christians to expect that with more money, better planning, and bigger organizations the task of world evangelization can be completed in short order.

Isn’t it curious that Jesus never used hype to promote His mission? He offered no exaggerated promises. Nor did He motivate His disciples by building false expectations. Jesus never manipulated an audience into doing what He wanted. In fact, He was brutally honest about the pains and problems awaiting those who would carry out His commission.

Fishing for men, as Jesus described it, was not going to be fun and games. Certainly, there would be exhilarating times when sinners repented and surrendered their lives to God. But there would also be resistance, rejection, and sometimes severe persecution. Best efforts would often bring disappointing results.

Jesus avoided hype. He consistently foretold the growth of the kingdom in honest and sober terms. He spoke of hard work, personal sacrifice, satanic opposition, and mixed responses, as well as of joy over abundant fruit that would last forever.

Jesus illustrated the mixed responses that evangelists must expect by telling the story of the Four Soils and offering His commentary on it (Matthew 13:1–23). In the world, said Jesus, there are four kinds of “soil,” and upon hearing the gospel, each soil reacts in a different way.

First, there are people whose minds and hearts are completely closed. No matter how clearly the gospel is presented to them, they do not understand it and evangelism gets nowhere. Jesus left His disciples with no illusions. The disciples, and all who followed them, would learn by experience how the ancient preacher Isaiah felt when he cried in frustration: “These people have eyes, but they do not see; they have ears, but they do not hear! Their hearts are so calloused, they cannot understand” (Isaiah 6:9–10; Matthew 13:13–15).

The disciples observed this stony reaction in many who heard Jesus, though there was never a better evangelist than He. The utter spiritual deadness of many who hear is a sobering reality.

Second, there would be people who at first hearing accepted the gospel. But their faith would be of short duration. Theirs was superficial religion, rootless and unable to withstand opposition. The cost of discipleship would be too great for them.

Sad also would be the case of people who received the word of salvation but worldly concerns and the effects of affluence would prevent them from doing anything significant for Jesus. A flicker of faith would perhaps remain, but it would be “choked” to unfruitfulness. Such people are too busy pursuing success to amount to anything in the kingdom of God.

Church membership rolls are filled with such people. There is more of this third soil in North America and Western Europe than of all the others. It is the pre-eminent sin of our age, and the most crippling in terms of kingdom service. No nation, and few individuals, have stood for long the test of material prosperity.

The picture Jesus painted of the progress of mission would not be all dark. On the contrary, the fourth soil would produce abundant harvest. God’s Spirit crushes rock and changes a soul’s condition. Grace makes the most resistant heart receptive. This is every evangelist’s hope and confidence. To an evangelist, no heart’s condition is finally fixed until death ends its time and opportunity to hear the gospel and receive Jesus Christ.

When it comes to moving men and women to mission and evangelism, hype becomes hollow and, in the long run, dangerous. The repeated use of hype to promote a cause that ought to lie at the center of Christian commitment is a sure indication that something is seriously wrong.

In view of the growing disdain in Western culture toward anyone attempting to encourage nonChristians to change their faith and follow Jesus, we must prepare for rough waters. Surveys show that a growing percentage of young people in Canada and the United States do not believe that exclusive faith in Christ is necessary for salvation. Nor do they accept warmly the idea of trying to convert others to Christianity.

It will require more than hype to stir enthusiasm for Christian mission in the years ahead. We will have to return to the basics of what the Bible teaches Jesus did to save sinners and what He demands from those who follow Him.

During the last year of His three-year ministry, when opposition against Jesus was mounting, a man said to Him, “I will follow you wherever you go.” Jesus replied to him, “Do you realize that I am homeless? Foxes have holes and birds of the air have nests, but the Son of Man has no place to lay His head. Do you realize what you are getting yourself into?”

Jesus called to another man, “Follow me!” But the man replied, “Lord, first let me go and bury my father.” Jesus supported proper respect for one’s parents, but He challenged the man’s priorities, saying: “Let the dead bury their own dead, but you go and proclaim the kingdom of God.”

Another man said, “I will follow you, Lord; but first let me go back and say good-by to my family.” Jesus knew how important farewells were in that society. Yet He challenged the man’s commitment, saying: “No one who puts his hand to the plow and looks back is fit for service in the kingdom of God” (Luke 9:57–62).

When the issue is proclaiming the gospel, Jesus offers anything but hype! The power of His challenge has lasted 2000 years.

Dr. Greenway, Missionary Monthly Associate Editor, has been professor of World Missiology at Calvin Theological Seminary, Grand Rapids, since 1989. Earlier, he and his wife, Edna, served as Christian Reformed missionaries to Sri Lanka and Mexico. Dr. Greenway has served as pastor and mission administrator and has written numerous books and articles.