“‘Woe to the shepherds who are destroying and scattering the sheep of my pasture!’ declares the LORD…‘I will place shepherds over them who will tend them, and they will no longer be afraid or terrified, nor will any be missing….’” (Jeremiah 23:1–4)

“Keep watch over yourselves and all the fIock of which the Holy Spirit has made you overseers. Be shepherds of the church of God, which he bought with his own blood. I know that after I leave, savage wolves will come in among you and will not spare the flock.” (Acts 20:28–29)

Elders have pastoral—that is, shepherding—duties. They are to watch over the flock, defending it from wolves, protecting it from the enemy, leading it to follow after the voice of the Good Shepherd, Jesus Christ. Woe to any shepherds who fail to care for the flock, who scatter instead of gather together, who allow the sheep of the Lord to be hurt instead of protecting them and securing their care. Such Is the clear and unmistakable message of the Scriptures, summarized powerfully in the three passages cited at the beginning of this article.

We’ve explored several dimensions of this overarching duty of the eldership in recent months and years. You have written me gracious letters, expressing appreciation for the emphasis, and asking for even more help to keep the focus on shepherding, pastoring, instead of on the superficial administrative tasks that usually devour the time of officeholders.

In this article, I begin a four-part study under the heading “How Big are the Wolf’s Teeth?” The title and the subject arise out the Acts 20 passage in which we are warned that the church of the Lord (described as the flock of God) will face the tearing fangs of the Enemy in every age. It is imperative for elders to know just what those fangs look like, just how they work. Sort of like my dog who has become an absolute wimp around my cat. The dog knows all about the business end of the cat’s claws from first paw experience, and has become adept at avoiding problems. But woe to the neighbor’s cat who will not learn his lesson and bears a painful proof on his nose, Knowing the Enemy’s strength is the first step in avoiding trouble, 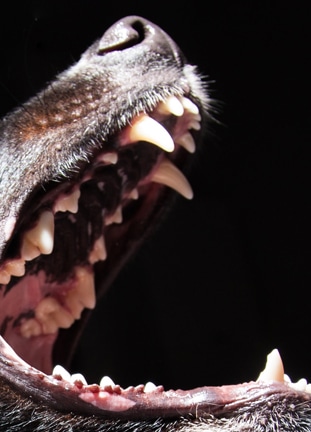 What are the fangs? I believe four incisors are prominent in the front of the Wolf’s jaw. They are Secularism, Materialism, Relativism and Pragmatism. We’ll consider them in these articles.

SECULARISM: The Power of the Here and Now

R.C. Sproul published a book in 1986 entitled Lifeviews in which he analyzed various cultural worldviews popular In our age. One of the worldviews he discussed is secularism. His discussion is instructive. Most folks think of secular as the opposite of religious, citing the U.S. Supreme Court’s famous distinction between the church and state. and its argument that the religious and the secular must be kept apart. But Sproul goes back to the origins of the word. to the Latin saeculum meaning “world” (Latin apparently had two words for “world,” saeculum and mundus. We get “secular” from the first, “mundane” from the second.) The ancient Latin peoples understood that life is lived in both space and time. There is both a “whereness” and a “whenness” to our existence. While mundus refers to the where (this earth, this place, as opposed to heaven or hell), saeculum refers to the when (the “here and now” as opposed to the eternal).

This distinction is immensely important. Clearly, God has put us in a place called earth, His creation. And just as clearly, when He created it He built time into it. Genesis 1 speaks of evening and morning, the first day. There is time-ness to creation. There is nothing wrong with that. It is not moral failure to get older; it is part of God’s creation, part of life In His world.

But. when that time-ness takes central place. when the here and now becomes all there is, then you have secularism! Secularism denies the eternal: it will not allow for the idea that anything in the here and now has eternal consequences. Secularism allows people to go to church, to “be religious,” but believes with all its heart that the important things in life, the valued things, are in the here and now.

A secular culture has certain practical features. Let’s look at them.

First, a culture or society that is secular has a passion for instant gratification-satisfaction here and now! It won’t wait for anything! It won’t wait for food, so it develops “Fast Food” restaurants and microwave ovens. It won’t wait for wealth; so instead of developing the practice of saving, it glories in “get rich quick” schemes and lotto tickets. It won’t spend the time to develop disciplined learning habits, so it spends millions on videos and cassette tapes that promise children higher grades in school and on SAT tests in just a few hours of watching or listening. It talks a lot about the dangers of deficit spending, of personal and federal debt, but it keeps on borrowing, using credit cards and not worrying about the payback. After all, that’s in the future. Even churches go into long term debt to finance elaborate building programs, giving little more than a passing thought to questions of stewardship, spending much more emotional energy defending the immediate impact of the facility on their timely and very relevant ministry.

And, the life and message of the church and her people is not immune to the preoccupation with the here and now either! In a world that sees value only in the here and now, sermons and any other forms of discipleship in the body of believers are evaluated exclusively for their relevance. Never mind the process of following, learning slowly what it means to be a disciple, growing patiently in grace and knowledge. Meet our needs now; if you don’t, I’ll go elsewhere! And, on the negative side of the same issue, the secularized church is one that avoids heaven and hell, that avoids the negative connotations of eternal punishment, that would never consider such a sermon as Jonathan Edwards’ “Sinners in the Hands of an Angry God.”

Motivation like that, a secular church believes, is irrelevant at best, and most probably cruel.

So, what’s the point? How does the knowledge of the sharp fang of secularism better equip the shepherds of Christ’s flock to defend the sheep? How does such awareness assist you to guard yourselves? Galatians 6 provides a most powerful prescription:

First, make sure that you, as elders, continually sound the voice of warning to people not to neglect the eternal. Remind them that all behavior, all belief, every dimension of the here and now has clear eternal consequences; that every action, every word is like a seed that will sprout with all sorts of consequences. Warn them about the danger of seeking instant gratification. Particularly with the children and young people, careful teaching about God’s eternal Kingdom and the life after death is especially urgent.

Second, make sure that you, perhaps through the office of the deacons, provide careful and thorough instruction concerning the practice of stewardship. Nowhere has the secularism bug bitten the sheep more painfully than in their pocketbook! The practices of disciplined giving, of careful saving, of avoidance of personal debt among the people of God must be cultivated. The secular practice of buying whatever you want, whether or not you can afford it (Use your MasterCard!), must not seize God’s people. Instead, elders and deacons must trumpet the Kingdom virtue of contentment, the Kingdom practice of generosity, the Kingdom characteristic of patience.

Finally, you must take a long-and perhaps painful look at your church’s debt load. Sure, it’s appropriate to borrow some money to build a needed sanctuary or educational facility—if it’s really needed! But, you should have some clear policy about long term debt, about mortgaging your congregation’s future to pay for the desires of the here and now. Such practices take our eyes off the eternal, teach us that we don’t need to pray or sacrifice (“The bank can provide our needs”), and can cultivate a secular spirit among the body of believers.

Dr. Sittema, editor of this department, is pastor of Bethel CRC, Dallas, TX.