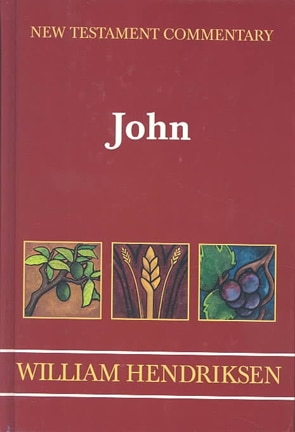 The long awaited commentary on The New Testament by this masterful preacher and lecturer is beginning to make its appearance. The first volume, here under review, in a contemplated set of 14 volumes, is now available. Volume II will soon be ready.

W.B.J. Martin, one of the book editors of The British Weekly, recently concluded a review of a British publication with the remark: “I am the more enthusiastic about this book because I didn’t expect to be.” That is not what I am going to say about Dr. Hendriksen’s latest publication. I am enthusiastic about this book and I expected to be. His reputation as an author and scholar justifies that expectation among his many readers. Evangelical Protestantism in general, and the Christian Reformed Church in particular, can never repay him for his scholarly authorship. Early in his ministry his pen became busy, and in subsequent years, some of which were spent all Professor of New Testament Literature in Calvin Seminary, that pen has continued under the blessing of God to produce pamphlets, magazine articles and books whose readers never fail to profit from them.

We can be glad that the author chose to initiate this set of commentaries with the volumes on John’s Gospel. It was a timely and wise choice. The Fourth Gospel, always fascinating to New Testament scholarship, is receiving fresh attention at the present time. In recent months several new studies have appeared, among them books by E.C. Colwell and E.L. Titus, A.H.N. GreenArmytage, and Canon H.E. Edwards. We should be thankful to God that within our own evangelical circles there are men like Dr. Hendriksen who are competent to deal with all the critical issues involved in a thorough study of this gospel and whose treatment of these issues is respectfully scrutinized.

The Introduction covers 64 pages. T here is an up-to-date treatment of authorship and related matters with ample bibliographical reference. In the section on Grammar (IV) more might have been written on the influence of Aramaic upon the Greek of the Fourth Gospel, but this is a mere opinion with me and possibly is not shared by those better qualified to make a judgment here. At the bottom of page 63 there is a valuable bibliography on this whole Aramaic question.

Th e commentary proper deals with the first six chapters of the Gospel. Here is where one meets the full stature of the author as a student of the Divine Word. The clarity of his exposition, the thoroughness with which important and significant details are discussed, and the erudition exhibited cannot fail to command the admiration of every reader. Here is a treatment of Holy Writ that is based upon sound and sane rules of interpretation. For example, the analysis of 1:9 which is translated, “The true light, which illumines every man, was in the act of coming into the world.” This is an important text. Indeed, it is a crucial text in any discussion of the doctrine of common grace. Extremists in the application of this doctrine try hard to establish the Authorized Version here, or something in the spirit of it. Dr. Hendriksen notes five interpretations of the text, the first two of which must be relinquished because they conflict with John’s teaching respecting limited atonement. As for the remaining three, he proceeds to show how they must be judged in the light of the context which is specifically a Gospel context. His conclusion is that preference must be given to the view that Christ “illumines every man who hears the Gospel; i.e., he imparts a degree of understanding concerning spiritual matters (not necessarily resulting in salvation) to all those whose ears and minds are reached by the message of salvation. The majority, however, do not respond favorably. Many who have the light prefer the darkness. Some, however, due entirely to the sovereign saving grace of God, receive the word with the proper attitude of heart and mind, and obtain everlasting life.”

In defense of this interpretation, Dr. Hendriksen shows how the context supports it. In addition, he points out how it accords with similar passages III the same Gospel (3:19; 12:46), and how it harmonizes perfectly with Hebrews 6:4–8 where it is clearly taught that there is an illumination which does not necessarily lead to salvation.

Many more passages could be cited to substantiate what was said above respecting the author’s painstaking treatment of the sacred text. I shall not be surprised if his three-page exposition of 3:16 will become a kind of homiletic base of supplies for many a sermon on that text in the future. And many a pastor and Sunday School teacher will find it helpful to quote the author’s discussion of John’s use of the term “sign,” pp. 117, 118: “It indicates a miracle viewed as a proof of divine authority and majesty. Hence, it leads the attention of the spectator away from the deed itself to the divine Doer.”

Space does not permit us to mention all the unusual features of this commentary, the outlines, the helpful variation in print, the numerous synthetic sections in which the details of exposition are bound together in convenient bundles. In short, this is a book laden with expository gems.

I hope I am not appearing presumptuous when I express a slight disagreement with one of the translations. Dr. Hendriksen renders 1:5 as “And the light shines in the darkness; but the darkness did not appropriate it.” Regarding that word “appropriate,” he recognizes that the translation “overcome,” which appears also in the margin of the Revised Version is gaining favor. But he feels it is not correct, especially in view of the parallelism of verses 5b, 10b, and 11b. Neither “overcome” nor “overpower,” he says, fits into this parallelism. Frankly, I am not so sure about that. The fact is that in all of John’s writings much prominence is given to the conflict between light and darkness. As Dr. Hendriksen himself observes, the darkness “hates the light…actively resists the light” (p. 74). Are we not, then, muffling one of the notes of victory in John’s Gospel when in 1:5 we substitute the expression “did not appropriate” for “did not overcome?” Goodspeed, by the way, did see this in the Greek: “the darkness has never put it out.”

Two little corrections. On page 38 there is a list of characteristic words. There should be no comma after the second zoe (y). And on page 198 under 5:19 there is a reference in parenthesis to 1:5. That should be 1:51.

Let me urge all our ministers, Sunday School Teachers and Bible students to purchase this magnificent set of commentaries. It is an investment that will pay of[ big dividends in a better understanding and appreciation of the sacred Scriptures.