“I perceived that whatever God does endures forever; nothing can be added to it, nor anything taken from it. God has done it, so that people fear before him. That which is, already has been; that which is to be, already has been; and God seeks what has been driven away.” (Ecclesiastes 3:14–15)

Heaven: does it exist? As churches we pray to God the Father “who art in heaven,” we confess that He is the “Maker of heaven and earth.” And we express our hope “in the life everlasting” and “the life of the world to come.” As Christians we talk with our unsaved neighbors about sin and salvation, hell and heaven. Yet, all of this begs the biggest question of all—does it even exist?

In a survey published October 21, 2003, the Barna Research Group unveiled many fascinating statistics about life after this life. Speaking of a generic belief in life after death, 81% of Americans believe in an afterlife of some sort. Another 9% said life after death may exist, but they were not certain. Consistent with this, 79% of Americans agree with the statement “every person has a soul that will live forever, either in God’s presence or absence.” Those least likely to believe in life after death were Hispanics, Busters (ages 20–38), residents of the West, atheists and agnostics, those associated with a faith other than Christianity, and unchurched adults; although more than two-thirds of all those in these groups accept the existence of an afterlife. Speaking specifically of heaven, 76% of Americans believe that heaven exists and 71% said that there is such a thing as hell (althoughjust one-half of 1% expect to go there). 64% of Americans believe they will go to heaven, 5% that they will come back as another life form, and 5% contend they will simply cease to exist. Of those who believe in heaven, 46% de­scribed it as “a state of eternal ex­istence in God’s presence” and 30% said it is “an actual place of rest and reward where souls go after death.” 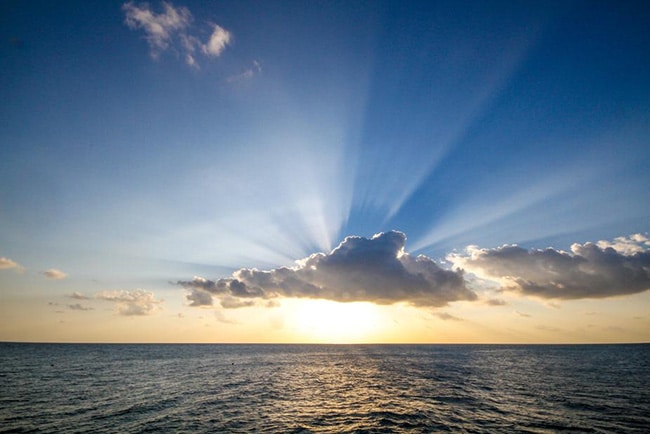 All of this goes to show that we live in a religious society although our religion does not line up with those of our neighbors. My purpose, then, in this new series of articles is to equip you with “the reason for the hope that you have” (1 Peter 3:15) so that you might rest in the confidence of eternal life as well as be prepared to reach those who need to hear Scripture’s message on heaven. In this opening article, I purpose to answer the simple yet fundamental question of whether heaven exists. To answer this ques­tion we turn to the intriguing words of Ecclesiastes 3:1–15.

The title of the book, Ecclesiastes, is the Greek translation of the He­brew term, Qohelet. This is the word translated into our English Bibles as “Preacher” (1:1). Yet “preacher” does not quite convey the image of the original term.

What these ancient Hebrew and Greek words speak of are the con­vening, or gathering together of a sacred assembly of God’s people. The words of Ecclesiastes are the words of the “Assembler,” or “Con­vener” of the people of God who endeavors to teach them God’s wisdom.  What is so fascinating is that Ecclesiastes is such a pessimis­tic book. Qohelet gathered the people of God to hear the most hon­est, real-world sermon ever preached.

The perplexing question is, how can the Word of God say things like, “All is vanity” (1:1), when it also says that God made all things “very good” (Gen. 1:31)? To answer this question, some commentators have said that Solomon wrote the book at the end of his life, as a repentant old man to show the assembly of Israel how he fell into despair of vanity by his sins.

The best answer, in the opinion of this writer, though, is one that shows the creativity of the Holy Spirit in the inspiration of Scripture. An unnamed narrator wrote Ecclesiastes (who very well may have been Solomon) and did so in the third person in the prologue and epilogue, but while speaking in the first person by assuming the name and persona of Solomon in the body of the book (Cf. Dillard & Longman, An Introduction to the Old Testament, 247–55; Young, An Introduction to the Old Testa­ment, 340–41). The whole point in doing this was for “Solomon” to teach his son to “fear God and keep His commandments” (12:13) be­cause life apart from God and His covenant was vanity.

Ecclesiastes is hardly the book of Scripture, then, that we would ex­pect to turn in seeking to answer the question of whether heaven exists. Ecclesiastes’ pessimism is no more evidence than in chapter 3, which speaks of the tyranny of time. Verses 1–8 are hardly the idyl­lic lyrics of the 1965 song by The Byrds, who sang, “To everything—turn, turn, turn.” Even closer to home, these verses are not to be used with the effect of saying, “Ev­ery cloud has a silver lining,” when someone’s loved one has died. No, these words are about despair—despair because time tyrannizes us. As Qohelet says, there is a “sea­son” and a “time” for “every mat­ter under heaven,” which he ex­presses in couplets of polar oppo­sites: born/die, plant/pluck, kill/heal, break/build, weep/laugh, mourn/ dance, cast/gather, embrace/re­lease, seek/lose, keep/cast, tear/ sew, silence/speak, love/hate, war/ peace.

These verses are a litany describing the sovereignty of God, who, in “His eternal purpose” and “according to the counsel of His will . . . he hath foreordained whatsoever comes to pass” (Westminster Shorter Cat­echism, Q&A 7). Since “every matter under heaven” has its ap­pointed time, Qohelet asks, “What gain has the worker from his toil” (3:9)? Notice this tyranny of time comes from God himself, when Qohelet says, “I have seen the busi­ness that God has given to the children of man to be busy with” (3:10). Further, he concludes, say­ing, “He has made everything beautiful in its time” (3:11). What this word conveys is the idea of everything being suitable or ap­pointed, and because of this, time is “beautiful” (Keil & Delitzsch, 6:686). What Qohelet is expressing is that all things are vanity because of the “fall and disobedience of our first parents, Adam and Eve” (Heidelberg Catechism, Q&A 7). And because of this, God’s curse has come upon us.

Are you depressed yet? Do you feel in your hearts what Qohelet is saying? All things have their ap­pointed times—the sun rises, the sun sets; we are born and God or­dains the number of our days until death; the alarm goes off, you work, you race home, you go to sleep, only to awaken to do it all over again the next day!  We are merely filling in time that goes on and on and on, seemingly with no end in sight, with no purpose—I work, I pay for my children’s edu­cation, I try to fund my retirement, I will never have enough, so when does it end? We are like the mouse in the wheel, we run and run and run, never to get the cheese. There­fore, Qohelet concludes this dis­course, saying,

Ecclesiastes describes the life of the fallen man and fallen woman apart from a saving relationship with their Creator. The Confession so beautifully teaches that the life of Adam, after his sin, “separated himself from God, who was his true life” (Belgic Confession, art. 14).

Yet as the narrator tells the tale of Qohelet’s pessimistic nihilism, he also gives glimpses of hope throughout his book. In 3:11 that hope is summarized in the word “eternity,” which is our translation of the Hebrew word, olam: “He has put eternity into man’s heart.” What exactly is this eternity that is in our hearts? A well-known Old Testa­ment commentator, David Hubbard, says of this verse,

“Eternity” to Old Testament people was not timelessness or absence of time. They knew no such realm. It was, rather, extension of time—as far back and as far for­ward as one could imagine (Ecclesiastes, Song of Solomon, 106–107).

What was the effect of having this innate knowledge of and desire for eternity? One of the deans of Old Testament scholarship in our day, Walter Kaiser, said of this verse:

This quest is a deep-seated desire, a compulsive drive, because man is made in the image of God to appreciate the beauty of creation (on an aesthetic level); to know the character, composition, and meaning of the world (on an academic and philosophical level); and to discern its pur­pose and destiny (on a theo­logical level)…Man has an inborn inquisitiveness and capacity to learn how every­thing in his experience can be integrated to make a whole (Walter C. Kaiser Jr., Ecclesiastes: Total Life, 66).

So then, addressing our main ques­tion: does heaven exist? According to Qohelet, “eternity” is a univer­sal belief—“He has put eternity into man’s heart.” All cultures in all times testify to a belief that there is more to life than what we see and experience. For example, some ancient cultures believed that the soul lived near the grave of its body, and that the living family needed to take care of it. Don’t we evidence the same when we care for the graveside of a loved one? Other cultures in the East believed in re­incarnation until the soul reached Nirvana. The Greeks believed after death the soul was taken across a river to either a place of reward or punishment. And the Greek philoso­pher Plato believed in the preexis­tence of the soul and in its immor­tality.

Further, according to Qohelet, “eter­nity” is an internal belief—“He has put eternity into man’s heart.” It is a part of our created nature that remains despite our fall. Of course it is stained by original sin and we seek to repress it (Rom. 1), never­theless, it remains and evidences itself.

While Qohelet speaks of the vanity of life apart from our true life, which is God Himself, for those who have been reconciled to Him and brought back to life, having our lives hidden with Christ in God, we can be joyful, do good, eat, drink, and even take pleasure in the toil of work. As Qohelt says, “This is God’s gift to man” (3:13). In his previous discourse in chapter 2, he concluded in a similar way, saying, There is nothing better for a person than that he should eat and drink and find enjoy­ment in his toil. This also, I saw, is from the hand of God, for apart from him who can eat or who can have enjoyment? For to the one who pleases him God has given wisdom and knowl­edge and joy, but to the sin­ner he has given the business of gathering and collecting, only to give to one who pleases God. This also is vanity and a striving after wind (2:24–26).

Qohelet longed for release from the vanity and tyranny of this fallen life. He longed for eternity, for the con­summation of all things, when his toil would no longer be meaningless. In the midst of our seemingly meaningless nine-to-five jobs, we can have some measure of pleasure beyond our companions. Thus, as Paul says to us concerning the res­urrection of Christ: “If in this life only we have hoped in Christ, we are of all people most to be pitied” (1 Cor. 15:19). Thanks be to God that we have hope for the life of the world to come because of Jesus’ resurrection.

So does heaven exist? It exists. Even Qohelet in his pessimism knew it. Even your neighbors know it. Even we have come to experi­ence it because of the work of Christ, who stepped out of eternity into time in order to take us into eternity.