In explanation of the title of this article, we refer to last month’s contribution by the same writer on: The Man of the Confession.

Like all other Confessions, the Confession of Guido de Bres has its own history. In discussing the history of this Confession, the very first question to be answered is this: Was de Brcs really its author?

There is no one who denies that de Bres had a share, perhaps a lion’s share, in its origin. But centuries back, beginning with the Arminian historian Uytenbogacrt. there have been authors who supposed the Confession to be a collective work, framed by several theologians.1 They founded their opinion on a passage in a letter of one of the oldest Leyden professors, Saravia, who wrote therein to Uytenbogaert: “As to me, I acknowledge to be one of the first authors of that Confession, just as Herman Moded. Are there more still living? I do not know.”

From these words the conclusion was drawn that there were at least two other authors of the Confession besides de Bres. But this quotation was incomplete and therefore misleading.

Saravia continued his letter with the following words: “It (viz. the Confession) was framed, for the first time, in the French language, by Guido de Bres, servant of Christ and martyr. But before he published it he communicated it to ministers of the Word of God—all those whom he could contact. He proposed to them to correct it if something displeased them, to add to its contents or to abbreviate it. His purpose was that nobody should think that it was the work of a single person.”2 In these words we find exprcssed all the modesty and all the feeling of responsibility of de Bros: the Confession should not be his confession but that of the Church.

On the other hand, Saravia declares plainly that de Bres is the original author. It is possible that some changes were made, but we have no proof for this and we do nobody an injustice if we go on speaking of the Confession of Guido de Bres.

Another question follows closely the former one: Is the Belgic Confession original or is it a copy of the Gallic Confession?

What was the reason that de Bres with so much care drafted this Confession and what was his purpose in sending it to King Philip II and introducing it in the churches?

The answer is to be found in a poem, a sonnet, which most probably came from the hand of de Bres himself and preceded the first edition of the Confession.3 It may be translated as follows:

Before judging and pronouncing sentence Condemning or acquitting, it is expedient For all judges to know the argument; Therefore hearing both parties makes sense.

For if only one may speak for his defense, He may be wrong or right, his cause prevails. We will never be right if our tongue fails And if we must remain in silence.

Grant us an audience, O Lord and King, And also you judges, give us the right thing, In that way you will do right and justice.

And applying the rules of human affection You will know while reading our Confession That condemning us is the greatest injustice.4

De Bres wanted one thing: to be in his Confession the voice of his churches; therefore he wanted an audience with the king. His purpose was apologetic.

Years before there had already been, in the northern part of the Netherlands and in Germany (Munster), the revolutionary anabaptistic movement. The people who had followed the strange and pious fantasies of the leaders of this movement had tried to found the kingdom of God in this world by subverting the existing government. Since that time the way of least resistance for the temporal powers was to stigmatize all adherents of a new doctrine as revolution· aries. De Bres wanted a fair hearing and a just treatment. 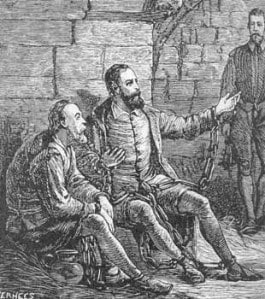 But for that very reason he did his utmost to make his Confession the voice of the churches, made by common agreement (“faite d’un commun accord”).

But of course this was not all. The time of the Reformation was the time of the multiplicity of confessions. This was a special feature of that movement, one of its characteristics.

The Roman Catholic Church had been the church of the sacrament. Even if a person knew so little of the doctrine of the church that you could write his conviction on a dime, as long as he received the sacrament and made no objections against it, he was considered saved.

The Reformed Churches honored the sacraments only in so far as they were seals of the promises of God, of theWord of God. Without that Word the sacraments were useless; and that Word required faith; and that faith wanted to speak, according to the words of Scripture: “But having the same spirit of faith, according to that which is written, I believed, and therefore did I speak; we also believe, and therefore also we speak.”5

In their Confessions the Protestant Churches showed their unity, their communion in faith; they showed their unity with the church of all ages and all places, with the apostles and the prophets and the martyrs, because it was a unity founded upon the truth of the Word of God.

And how beautiful, then, is this Confession of the Reformed Churches, with which we still wholeheartedly agree.

Its Biblical character is obvious.

In article VII it clearly confesses that the Holy Scriptures are the only rule of faith and that we may not consider any writings of men, however holy these men may have been, of equal value with those divine Scriptures; and that we reject with all our hearts whatsoever does not agree with this infallible rule. Here we find the foundation and the limit of this Confession. Its foundation, for every article is supported by one or more words of the Bible, or at any rate demonstrates its Biblical background. And its limit, for in Reformed Churches the last word is never spoken by the Confession but only by the Word of God; and a Confession may be changed by the Church, if a new understanding of that Word points the way.

Furthermore, we are struck by the theocentric character of this Confession. Not only do the first and the last article speak respectively of the beginning and the end of all things in the Father of lights; also the other articles always find in him their source and sense. The great question of articles II–VI! is: How can we know God? The articles that follow speak of the Holy Trinity and of the works of the divine Persons. Jesus Christ is true and eternal God (art. X) and the same is said of the Holy Spirit (art. XI). You cannot find any article which is founded on a kind of experience-theology, which is anthropocentric; all are theocentric. And even when the Confession speaks of the civil government, it does not speak of a human institution but of an office by which the kingdom of Christ must be promoted and whereby God may be honored and worshipped by everyone as he commands in his Word (art. XXXVI).

In the third place we may speak of the very practical and comforting character of this Confession. At times one might have the idea that though in our Catechism, the booklet of the only comfort, we hear the voice of the heart, in the Confession we find the language of the head, of the intellect.

That is not true.

The first article starts with the splendid words: “We all believe with the heart and confess with the mouth that there is one only simple and spiritual Being which we call God.” Of that same heart article V speaks, when the believer declares that he believes without doubt all things contained in the Holy Scriptures, especially because of the witness of the Holy Spirit in his heart; and art. VII exclaims that we reject with all our heart whatsoever does not agree with this infallible rule. And to mention no more, how beautiful is the comfort presented in art. XIII in these words: “This doctrine affords us unspeakable consolation, since we are taught thereby that nothing can befall us by chance, but by the direction of our most gracious and heavenly Father.” The heart of man, which is the very fountain of his existence, is never left out of the Confession.

Last but not least, this Confession speaks of the deepest secrets in clear and simple words. The greatest mysteries for our understanding are those of the Trinity and of eternal election. But read the lucid exposition of the first mystery, in so far as it can be expressed in human language (in articles VIII and IX); or read the short but striking exposition of the doctrine of election in art. XVI with its emphasis on both God’s mercy and his justice. Therefore our Confession has been not only the expression of the faith of the adults in the church, but also the textbook for its young people. who receive from the golden words of Guido de Bres the finest instruction in the mystery of godliness,

In the introduction to the Belgic Confession in our Psalter Hymnal we read the following words: “Its excellence as one of the best symbolical statements of Reformed doctrine has been generally recognized.”

Be it so and may it remain so!

And may something of the spirit of our fathers still dwell in our hearts, who declared in the same introduction that they would “offer their backs to stripes, their tongues to knives, their mouths to gags, and their whole bodies to the fire,” rather than deny the truth expressed in this Confession.