I had never met the man before. All I had was his name: Dennis. Having moved into my new church just a short time before, my elders had told me about this member of the congregation who was confined to a care facility some distance away.

He was not that old, or so I was told. He was only in or around his mid-forties, but he was suffering from A.L.S. Experts refer to this as Amyotrophic Lateral Sclerosis; most people simply call it “Lou Gehrig’s disease.” The elders recommended that I visit him sometime. So, I now found myself walking down the hallway toward his room, not knowing who or what to expect.

This care facility had that institutional look to it, as well as the barely sanitized smell that so many of these sorts of “homes” have. There were drab green walls, a highly polished floor, and an odor in which you could detect both human waste and chlorine bleach doing battle. This was clearly not the kind of place where the rich and famous came to live out their final years on earth; rather, this was where those came who could afford no better.

I approached Dennis’ door and entered his room. It was dreary and bare, with no pictures on the wall, no knick-knacks on the dresser, and not even a chair to sit in. There was nothing at all to personalize this room—nothing at all that would indicate that it was someone’s “home.” The only furniture was a simple three-drawer, wooden dresser and a cold chrome institutionalized bed. On that hard bed lay but a shell of a man.

Dennis’ hair was matted and uncombed; his beard was tousled and unkempt. His shirt had the remnants of at least several days’ worth of meals spattered across its front…but these were all secondary. What first and foremost grabbed my attention was Dennis’ arms and legs. The disease had attacked these parts of his body first, causing the muscles to degenerate and constrict. This, in turn, caused his extremities to be pulled in tightly to his body, like a spider caught in the first hard frost of the autumn—the kind you have to blow on to see if they are alive.

I did not have to blow on this man. I could easily see that he was still alive because of his eyes. The disease had struck this part of him next. They were the eyes of a blind man—ever staring but never seeing. They moved aimlessly, spasmodically, back and forth, up and down. He had not heard me enter, and so I stood there for a moment watching him, debating whether or not I should leave and never come back. He would never know. What difference would it make?

A fresh stream of spittle ran down from the corner of his mouth and onto his beard, following the dried up course of others before it. I decided to at least say his name; if he did not respond, I could always go back and tell the elders I had tried.

Immediately, he turned his head and stared at me with those big sightless eyes. Obviously, the disease had not affected his hearing.

“Yeshh,” he slurred. ALS was now attacking this part of his body.

I introduced myself as the new minister of his church, and I watched as his right arm, with its hand pulled tightly inward, tried to move out to me in order to greet me. I put my hand on his, and instantly, his face broke into a mile-wide smile. The disease had obviously not yet found these muscles, as this smile became the trademark of my meetings with Dennis. He was a joy to visit, and I found myself going back there regularly.

Over the course of my time with him, he told me about his life. In his halting speech, he told me of his children who were now grown but lived too far away to visit. He told me of a wife whom he had loved much, but who had left one day and never returned. He told me of a job that he had performed ably and well, but the money from it had run out years before. He also told me of this disease, which was slowly overtaking him more and more each day, and which he knew would someday take his life. Dennis told me a lot of things, many of them meaningless, and now I’ve forgotten them. One day, however, he told me something that I will never forget.

During one of my visits, I greeted him as usual. As soon as he heard my voice, he responded in his familiar way: with his trademark Texas-wide smile. So I asked him, “Dennis, why do you smile so much? How can you be so cheerful when you have gone through all of the things that you have?”

Without missing a beat or even thinking it over, Dennis responded in his slurred and crippled speech, “Because…I…have…Jesus…in…my…heart.” 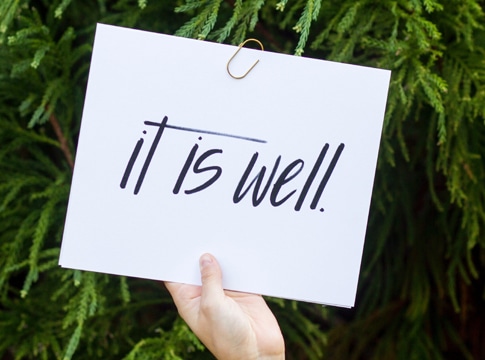 Here was a man where every pitch life threw at him was a curve ball. Here was a man of whom society would say had absolutely no quality of life, a prime candidate for euthanasia. Here was a man who had no apparent reason for living…and yet, God had a reason for keeping him alive. God had great use yet for him, even with his disease. God gave quality to his life, and that was what was most important.

God used Dennis to minister to me, the minister. He used Dennis to challenge me and my view of life. He used Dennis to cause me to grow closer to the Lord out of appreciation for all that the Lord has given to me. God, through the Apostle Paul in I Thessalonians 5:16–18, commands us, “Be joyful always; pray continually; give thanks in all circumstances, for this is God’s will for you in Christ Jesus.” Through Dennis, God taught me the full meaning of these verses: that if I have “Jesus in my heart,” then I really have everything I need. The next time I am thrown that curve ball in life and I am tempted to not be joyful, to not pray, to not give thanks then I will remember Dennis and smile, because I, too, have “Jesus in my heart.”

Rev. Edward Marcusse is the pastor of the Bethel United Reformed Church in Calgary, Alberta.