From Fundamentalism to Calvinism and Ordination

Pastor Stoffregen was raised in a good Christian home in Wisconsin, where his family belonged to a church affiliated with the Independent Fundamental Churches of America (IFCA). He says, “The family I was born into, though not Reformed, loved the Lord and aimed to diligently teach me the Word of God at a very young age. They showed me my own sin and misery and my need to be delivered by Jesus Christ. I professed faith as a child and was later baptized at the age of eleven.” Early on, through the writings of Ravi Zacharias, Phillip felt a more burning need to engage in apologetics and evangelism and thought he might like to pursue the ministry of the gospel. He made this known to his pastor, who recognized his gifts and mentored him.

After graduating from high school, Phillip enrolled in the Advanced Biblical Studies and Biblical Languages program at Calvary Bible College and Theological Seminary, located in Kansas City, Missouri, an independent, nondenominational institution. There he graduated with highest honors. He was awarded Who’s Who in America 2012; the Advanced Bible Studies Department Award, granted to only one student in that major; and the Zondervan Greek Award, granted to only one Greek student. It was Stoffregen’s intention to continue his studies at the Calvary Seminary upon graduating from Calvary College, but the Lord had other plans for him.

Phillip explains that during his time at Calvary Bible College, he had met with a number of professors and had a number of lunchtime discussions with his fellow students about the doctrines of grace. As more and more time went on, he embraced Reformed theology more and more. First, he accepted a thoroughly Reformed approach to soteriology (TULIP). Second, he abandoned dispensational premillennialism in favor of covenantal amillennialism. Finally, he accepted covenantal (paedo) baptism over against strict believer’s baptism.

Because of these changes, Phillip could not pursue a master’s degree at Calvary’s seminary, because the seminary was even more strictly dispensational and premillennial than the college. He decided that it would far more profitable to find a Reformed or Presbyterian seminary to study at. In the course of his time at Calvary, he developed a love for the Puritans as well as the writings and preaching of Dr. Joel Beeke. Given these interests, it seemed only logical to consider Puritan Reformed Theological Seminary in Grand Rapids, Michigan, as a place to pursue graduate studies. After visiting the seminary, it became clear that this would be a wonderful and ideal place to study for his MDiv. He moved to Grand Rapids from Kansas City in July 2013.

Beginning in high school and through his seminary years Phillip was always gainfully employed in various part-time jobs. While in college, he served as youth pastor of First Baptist Church of Paola, Kansas, affiliated with the American Baptist Churches. There he was given the privilege of preaching.

While studying at Puritan Seminary, Pastor Stoffregen and his family were members of the Eastmanville United Reformed Church. Leading the service at Covenant was his pastor, Rev. Jeph Nobel, who conducted the ordination and installation and gave the charge to the new minister. One of Pastor Stoffregen’s seminary professors, Dr. David Murray preached, and Rev. James Admiraal gave the charge to the congregation. Rev. Admiraal served as interim at Covenant during their year of vacancy while they were searching for a pastor.

Covenant met Phillip as he was approaching the end of his seminary studies and provided pulpit supply for them one Sunday in March 2017. Shortly thereafter, the elders asked him to meet with them for an interview and to discuss a possible summer internship after graduating. The council proposed that he serve as an intern for the months of June and July, and potentially longer to possibly consider him for a call when he sustained his classis candidacy exam. Phillip had not seriously entertained the possibility of serving as the pastor of a congregation. It was his intention to continue his education towards a doctorate in order to someday teach. However, after prayer, thought, and seeking counsel, the Stoffregen family accepted the proposal of the Covenant council and began serving there at the beginning of June.

In mid-July, the council called a special congregational meeting to discern the support of the congregation in extending Stoffregen’s time of service beyond July, until after his candidacy exam and the possibility of extending a call to him when he was declared eligible for a call. The congregation gave overwhelming approval. On October 10, Pastor Stoffregen sustained his classis candidacy exam and was declared a candidate for the ministry. A congregational meeting was held on November 6, where the council again overwhelmingly received support to extend to him a call to be their pastor. 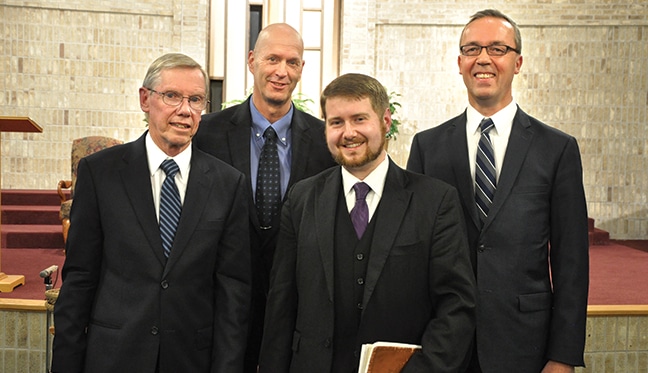 Rev. Stoffregen and his wife, Sophia, have a two-year-old daughter, Felicity. They met while he was studying at PRTS and she was pursuing an advanced degree at a university in Grand Rapids. Sophia, a Michigan native, was also raised in a Christian family in a nondenominational church.

Mr. Myron Rau is president of the Reformed Fellowship board, and a member at Covenant URC in Kalamazoo, MI