If you were a principal or a teacher do you think you would ever worry about the good or gifted student? Yet, today this gifted student is receiving much attention in American education as the problem. How did we ever get into this situation? Probably a day with a principal will help understand. 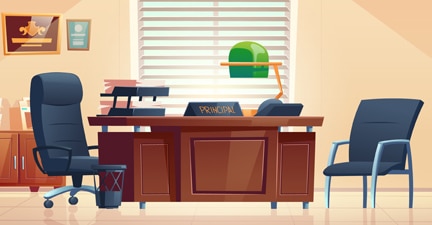 A principal calls the home of a missing student. On the other end of the line a mother weeps because her George went to work instead of finishing his last year in high school. The principal promises the mother that he will do what he can to get George to go back to school. Should he have promised this?

The principal then goes to George’s homeroom teacher. This teacher says, “I have talked with George. It seemed to me he was resigned to finishing out the year. But he has a serious reading problem. He is taking government, English literature and economics. These take a lot of reading. I am not going to encourage him to come back. If the kid can’t get it, he can’t.”

So the principal goes to the counselor. Should he? Well, he does. The counselor is sympathetic and succeeds in getting George to come back to schooL First he has gone to George’s teachers and received enough assurances from all but one of them that if George tries, they’ll give him a “D.” So the administration works for the maintenance of mediocrity in his school. He does so at a cost.

George himself could well be making money to help financially in the home, school, and church. Boys at the age of sixteen could also be apprenticed. Tradesmen have complained that at a later age young men are not as interested in doing the detail work necessary to learning a trade.

It costs too, as far as teacher personnel is concerned. The teacher has been trained in his academic field, but he is frustrated with George’s inability and has to baby-sit him through school. Neither does this sort of things invite new scholars to enter the teaching field.

It costs too, for able students. There is no stimulus in competing with one incompetent in the field. An eighteen year old athlete does not find much fun playing tennis with a twelve year old. Such difference in mental age is not uncommon in a high school class. Differences in specific abilities are even much greater than that. Gifted students must wait around and often become indifferent to good work in the meantime.

But if the schools do not provide for the Georges, it costs too. Where must George go if he can’t find work? In the long pull will it not lower the standard of living if our Georges do not get their high school diplomas? We ask all covenant people to contribute to the support of Christian education. Must we then not also train their non-academic sons and daughters as well as their academic offspring? Is it not also a wholesome thing in America that all children attend one school so that a mutual appreciation for one an other’s talents may grow? This is an assumption that can bear study.

What must be done to solve the problem of educating the exceptional student along with the average student? Sometime ago I was talking with a sympathetically minded professor of foreign languages. He believed that the answer lies in separate schools. This idea is receiving more and more support. It seems especially motivated by a fear that Russia will outdo us in the developing of top talent. Chancellor Kimpton of the Chicago University is quoted in the Nations Schools (December ‘56) as saying that “Few cities have had the courage to establish public schools or even classes for the superior child…A school board has no trouble establishing vocational schools for the inferior….The future depends on our success in the selection and training of leaders (p. 144).

Time (12-3-56) quotes some sharp words from Rear Admiral Hyman G. Rickover, the father of the atomic submarine. “To put it bluntly,” said Rickover, “our schools do not perform their primary purpose, which is to train the nation’s brain power to the highest potential…We shall not do justice to our talented youth until we seek them out at an early age—no later than ten or eleven—and educate separately.”

Quite obviously this is an administrative problem. It is a problem of so organizing our educational system as to develop the potentials of our students as fast and as effectively as it can be done. In our country we must satisfy ourselves that this be done without violation to our democratic ideals. So far our nation is the envy of the world. Of course we like to assume that our educational system has something to do with our high standard of living, our great scientific knowledge and technological advance. On the other hand we witness moral degeneracy and a growing crime wave. Dr. Ruth Alexander told administrators in Chicago last February that our present system of education breeds juvenile delinquents. She advised that we modify compulsory education laws and child labor laws and put the “rascals” to work. That’s what they want. That’s what they need. But we will not let them work.

How about our Christian schools? Staggering enrollments are facing us from the kindergarten through college. Shortage of teachers, overcrowded classrooms, and rising expenditures should force us to think this thing through. It’s really too expensive to use our meager supply of college graduates to “baby-sit” teenagers, if that is practically all that they arc doing. It has been wisely said that a person must learn to work when he is young. Many of our students work after school hours and Saturdays and in this way do learn to work in spite of attending school. But this still leaves us with the problem of educating under one roof the exceptional student with the average student. This problem wi]l have to be met. No doubt we will first have to exhaust all the possibilities under our present system of comprehensive schools for all children. But this will mean, to say the least, a varied program and a recognition that there are superior students. It may also mean a critical glance at our teacher training program.